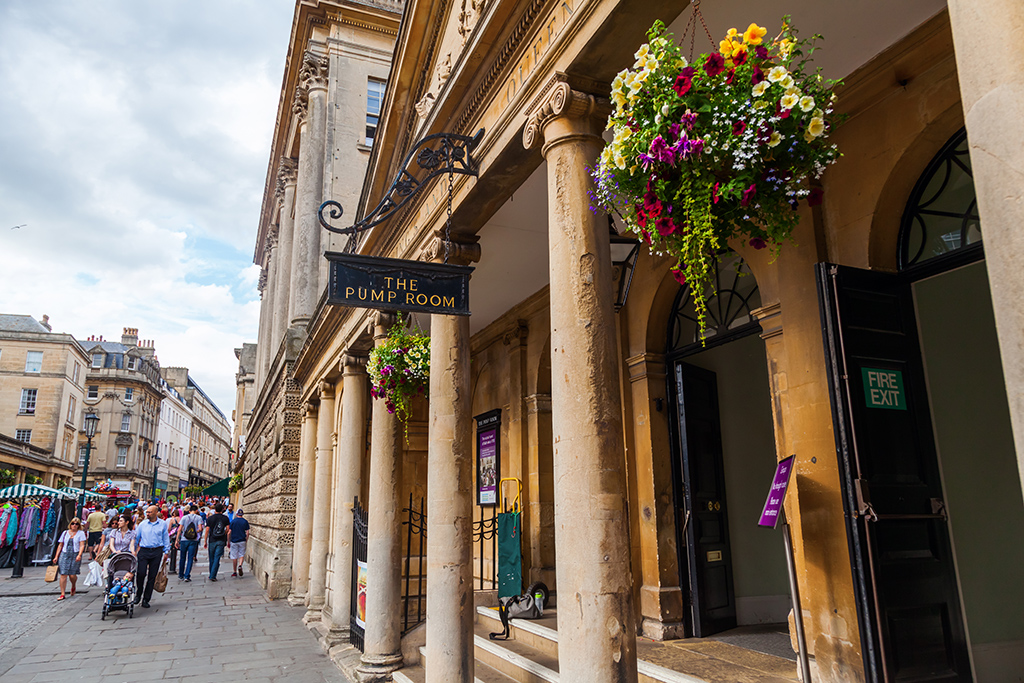 A walk around the city of Bath is to follow in Jane Austen’s footsteps knowing that Roman centurions trod these streets many centuries before her.

Bath is unique among British cities, having been recognised by UNESCO both for its Roman remains and as the most complete Georgian city in the world.

Built entirely out of honey-coloured local stone, Bath is also recognised as a sacred site having been a place of worship since pagan times, long before the Romans arrived in the first century AD. These three elements come together in the busy piazza known today as Abbey Churchyard.

Here, surrounded by buskers and street artists, the eighteenth-century Pump Room is built alongside the most complete Roman bathing complex in Britain, which was in turn built over the sacred shrine to the pagan goddess, Sulis.

Three hot springs bubble to the surface in this low-lying part of Bath. The water – over a million litres of it a day – emerges at a temperature of 46C, after having been underground for centuries. Still no one knows exactly how deep into the Earth this water originally plunged before emerging in the centre of Bath.

The well-attested healing properties of Bath’s springs made it a place of religious, medical and finally social pilgrimage for thousands of years. This city owes its very existence to hot, healing waters.

Starting outside the Pump Room walk through the neoclassical arcade that leads to Bath Street. Ahead of you appears the Cross Bath, a small, open air eighteenth-century bathing pool that was restored and reopened in the 1990s.

Opposite it looms the Thermae Spa, a huge modern complex on five levels. Whereas the Cross Bath can only accommodate a dozen bathers, up to a thousand visitors a day queue up for the Thermae Spa. Its rooftop pool, known as the New Royal Bath has one of the best views across the city.

These days this area is known as the Spa Quarter. It contains a number of picturesque old hospitals and small churches, and Bath’s Little Theatre. Passing between the theatre and the St John the Baptist Alms House, turn right into Westgate and head up hill towards the Theatre Royal.

On the corner ahead of you sits a Thai restaurant in a delightful semi-circular building with a lead-roofed balcony. Behind it a series of wine bars are tucked inside a low Georgian colonnade. Bath is full of eighteenth-century buildings repurposed for the twenty-first century.

The theatre itself was founded in 1805 and saw performances by great actors of the English stage like Edmund Kean and Mrs Jordan, the mistress of King William IV.

The main entrance and lobby we see today is a Victorian addition. Walking round the corner into Beaufort Square reveals the theatre’s entrance as Jane Austen knew it when she lived in nearby Trim Street. It’s a much more impressive facade with just two doors opening into the large, quiet square.

Continuing up Barton Street we come to Gay Street, which faces onto Queen Square. Enter the park in the centre of the square and walk to the obelisk, which was erected by Beau Nash, the Master of Ceremonies in Georgian Bath, in honour of Frederick, Prince of Wales. This square was the first new development of Bath by John Wood the Elder, who designed most of the city’s best buildings including the Circus and Royal Crescent. Wood’s ambition to make his hometown the most beautiful city in Britain were continually thwarted by local aldermen so he ended up building his neoclassical streets and squares in fields outside the old city walls on land owned by one Robert Gay.

Leave the park via Gay Street itself and climb the hill to the Jane Austen Museum at No 40. The Austens lived in Bath from 1801 to 1806 and Jane set scenes from two of her novels in the city.

Gay Street is very steep indeed – you are climbing a hill – and each house sits on its own step, like a staircase. At the top however the ground levels out for the Circus, which was one of John Wood’s boldest creations. Houses here are arranged in a circle surrounding a huge tree. Wood didn’t design the houses themselves, just this harmonious façade. Individual entrepreneurs in effect bought the doors, windows and roofline created by Wood, and built houses of their choice behind.

From the Circus, Brock Street leads west to the most famous of John Wood’s developments, the Royal Crescent which, like the Circus, was actually completed by his son John Wood the Younger after the old man’s death in 1754. In a massive graceful arc 30 town houses look out over the city. No1 Royal Crescent is now a museum showing how life was lived in Georgian Bath while No 16, once owned by a son of King George III, is now the Royal Crescent Hotel. Nothing in the design of the sweeping neoclassical façade was allowed to impinge on its visual impact, so much so that all the downpipes that drain the long roof are hidden inside the walls rather than visible to passersby.

The Royal Crescent once looked out on countryside, now it looks over the modern city of Bath but it is a perfect place from which to gain an overview of this unique and beautiful city.

This superb underground museum of life in Roman Bath is actually housed in the precincts of the original bath complex.

Learn how life was lived at the top of Bath society in this detailed recreation of one of its grandest eighteenth century townhouses.

Built in the eighteenth century as a meeting place for visitors to Bath, the Pump Room is still the place to drink the waters as well as eat breakfast, lunch and tea. The afternoon tea here is a Bath tradition as is the three person orchestra, the longest established ensemble of its kind in Europe.

Tucked round the corner from the famous Circus, this small family-run café doubles as a sophisticated, candlelit dining room in the evenings. Local sourcing and modern takes on traditional British cuisine have made Alison Goldman’s dining room a must for foodies.

This small, modern Italian restaurant has a few, much coveted outdoor tables overlooking Bath’s famous Pulteney Bridge. The bridge itself links fashionable Great Pulteney Street to the city and the food is as good as the view.

Sample the city’s best independent culinary artisans as part of a scheduled walking tour, or as a private experience. Each culinary adventure lasts around three hours and includes a meal’s worth of food samples, introducing you to the best of the city’s food scene.

Fashioned out of two houses at the centre of John Wood’s grandest achievement, The Royal Crescent opens up at its rear into a huge garden with spa and restaurant. From here it is easy to see how the uniformity of the façade stands in complete contrast to the highly individual houses built behind it.

This recent conversion of a Victorian hospital, built for taking the waters, is now a 99-room hotel close to the Pump Room and Roman Baths. The hotel spa has its own source of thermal spring water and its bar is one of the best in the city for cocktails.

A trendy, dramatically decorated hotel in what became late eighteenth-century Bath’s splendid new development across the river Avon. In Jane Austen’s day this broad street leading east across Pulteney Bridge was where the wealthiest visitors stayed.