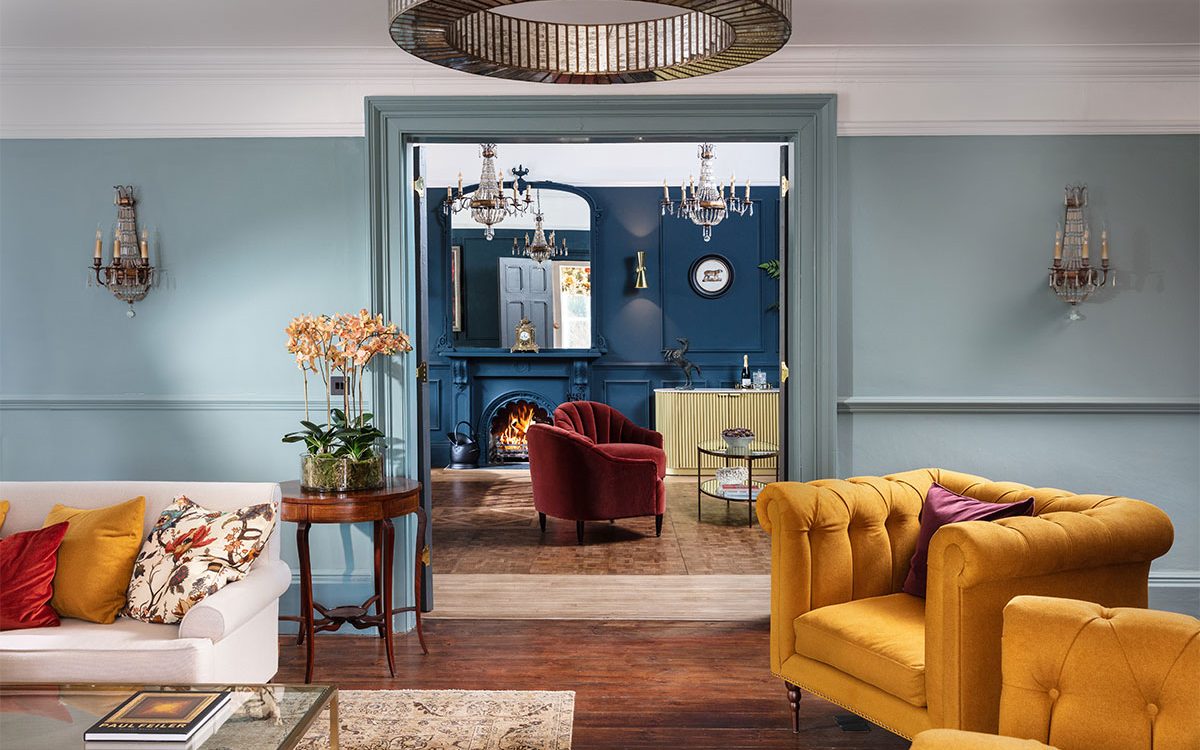 Longer days and warmer temperatures mean it’s time for a trip. From hotels to big houses, we provide the inspiration.

This city offshoot from the Queen of Scottish country house hotels could be Edinburgh’s answer to London’s The Ned. With a wellness area in the old bank vault and a swish restaurant in the former banking hall beneath a spectacular domed ceiling, the hotel capitalises on the building’s former life as the Bank of Scotland HQ. It’s full of cornicing and columns, original fireplaces and panelling, with canopy crown headboards in the bedrooms. A rooftop bar will be the place to see and be seen. Rooms from £495.

There are already coastal cabins, hill shacks, onsen domes and a bell tent on Fforest’s 500 acres which are designed so you can stay and play. Soon it will add a smart 23-room hotel, overlooking the River Teifi in two of Cardigan’s historic warehouses. Rooms from £113 a night.

This one’s bound to be a chart topper. In Soho’s famous Denmark Street, where the Sex Pistols once lived and the Rolling Stones recorded their first album, Chateau Denmark opens on 4 April. Expect a nod to punk and psychedelia in the 55 rooms, which cost from £510 a night.

A country cousin to The Mitre Hampton Court, this former childhood home of poet Percy Bysshe Shelley opens soon in Berkshire, with 55 rooms, a spa and whisky tasting room. Rooms from £180.

Views of the bonny banks of Loch Lomond are the highlight of this restored baronial manor hotel, which re-opened last year following a fire in 2017. The renovation has been designed to bring the outdoors in, with views all the way from check-in and the new lobby bar to bedrooms with private balconies. Historic details blend seamlessly with contemporary comforts. Expect public rooms with striking black lacquered panelling highlighted by antique brass features, and bedrooms with Timorous Beasties fabric headboards, sumptuous velvets and tartans. A new lochside extension with a ballroom is still to come. Rooms from £265 with breakfast.

Scandi-chic interiors abound at Northern Ireland’s newly opened Rabbit Hotel near Lough Neagh, where rooms range from small attics to much larger affairs with outdoor bath tubs and wood burners. A spa with sauna, steam room, salt chamber and an impressive outdoors Roman bath is about to open. Its name? The Relaxation Burrow, of course. Rooms with breakfast from £175.

Talk about a pool with a view. Overlooking the iconic chimneys of the Grade II listed power station, this hotel’s infinity pool alone will make a splash when it opens in late summer. You’ll get similar electrifying views from some of the 164 rooms within and from the rooftop bar and gardens, which were designed by the same folk who mapped out New York’s High Line. Reached via the new extension of the Northern Line, the art’otel will feature works designed by a Signature Artist, whose name, along with room rates, has yet to be announced. Watch this space.

The three rooms in this former Victorian police station are certainly arresting: one has a brass four-poster bed, another a double circular bath surrounded by gemstones. Six-course tasting menus are served in the intimate restaurant, Allium — it’s definitely a long way from porridge. Rooms from £350 a night, with breakfast.

It’s all about fun without the fuss at Bournemouth’s clifftop Nici Hotel, which replaces the iconic Savoy. Due to open in June, it comes with a buzzy bar, all-day dining, bikes to borrow, a pool, and oodles of South Beach style in the 70 rooms. Rooms from £175, with breakfast.

The Fox at Oddington, Gloucestershire

Almost a decade after Daylesford Organics’ Carole Bamford created waves in the Cotswolds with her pub with rooms, The Wild Rabbit, she is following up with The Fox. With just six bedrooms and a cottage, the gastro pub opens in June.

Chill out at the new H Spa which has just been added to this historic Grade II listed hotel as part of a £6 million refurbishment. With a 15-metre indoor pool surrounded by heated beds, the spa features treatments using Caudalie’s vinotherapy range. Pick from an Express D-Vine Facial, an exfoliating Crushed Cabernet Body Treatment or perhaps a Fleur de Vigne Candle Massage. You can visit for the day and enjoy lunch or afternoon tea, and a 50-minute treatment from £159, or stay the night, with an additional £30 credit towards dinner and bed and breakfast, from £229 per person.

Tails will be wagging at Ambleside’s boutique hotel with its indoors dog wash, dog-friendly suites with gardens, and walkies outside the front door. Eight new suites open in the Pavilion from Easter, adding to 15 rooms in the hotel, which has just been refurbished. Pavilion rooms from £450, with breakfast.

The sea view is what it’s all about at cosy Fuchsia Cottage, which looks down on the Cornish coast from the fishing village of Portloe on the Roseland Peninsula. With courtyard garden, wood burner, spacious kitchen and two en-suite bedrooms, it is also dog friendly. Short breaks from £822.

The Old Mission Church, The Cotswolds

Allelulah! Church-going just got seriously stylish, with this property for four in Paxford. The stained-glass windows, original doors and beamed, vaulted ceilings are still there, with a world of contemporary chic within. A designer kitchen opens onto the living and dining areas while a glass and steel staircase leads to a mezzanine bedroom with views of the church interior through a glazed screen. A second bedroom on the ground floor has a freestanding bath. And, praise the Lord, there’s a gastro pub over the road too. Three nights from £1,180.

The clue’s in the name — this quirky studio was once a Victorian ladies’ loo. More recently, the unique building within Berwick Upon Tweed’s Elizabethan walls has been used as an ice-cream parlour. It now holds a double bed and kitchenette with fold-down dining table while outside is a private courtyard. As for the conveniences, there’s a small shower room. From £120 a night for two.

Get hitched in style at this luxury estate in Thanet, with its Banqueting Barn and Old Granary, and space to sleep up to 24 guests. The medieval Chapel House itself has three lovely rooms, while separate modern lodgings are set in the paddock. Stroll around the 25 acres of gardens and woodland, get the driver to take you further afield, and call on the 24-hour onsite concierge for whatever you need. As for the ceremony, from June you can say ‘I do’ in several places.

Amid the dreaming spires of Oxford, this city retreat with private courtyard garden is hidden behind a mysterious heavy door just steps from Oxford Castle. Within are two beautifully restored 17th century properties, which together sleep a dozen guests. The smaller of the pair, The Masters Lodgings, comes with a listed staircase leading to two suites, each taking up an entire floor with their dressing room, seating area and stone and porcelain bathroom as well as bedroom area. Downstairs is a wood-panelled sitting room, a more formal dining area and fully equipped kitchen. Also opening onto the courtyard is Cloisters, which sleeps eight in four fabulous suites, one of which has a Grade II listed ornate plaster ceiling. Two others look out onto Oxford Castle, which is illuminated at night. There’s plenty of room for everyone downstairs in the large open-plan reception room with doors opening onto the garden. The kitchen comes with everything you need, including double ovens, no less than three sinks and a wine fridge, though if you’d rather not cook, you can go out in the city or book a private chef, one of several optional concierge services. Three nights for 12 is from £7,600.

What better base than a Scottish castle from which to set out and taste Speyside’s whisky offerings? Newly renovated Rothes Glen has its own whisky vault along with 10 ensuite bedrooms and some seriously grand public rooms. Two nights from £11,500.

A two-year renovation has brought this 17th century manor house in Little Petherick bang up to date with everything from a fitness suite with Finish sauna and twin hot tubs to a games and cinema room. There’s a firepit and BBQ outside, as well as an open-plan kitchen within. If you don’t fancy cooking, it’s just a short walk to Padstow with its Rick Stein restaurants. Like the rest of the house, the seven ensuite bedrooms have been beautifully designed. For even more luxury, you can book a private chef and a masseuse. A week for 14 from £5,285.

The Farm at Avebury, Wiltshire

Take all six of the converted stables at this country bolthole and you get independence for individual families plus space to come together for gatherings in the Barn and Granary. There’s farm food on the doorstep and Avebury Henge and Stone Circle to explore before a pitstop at The Red Lion, surrounded by ancient stones. The rustic-chic hideaways sleep up to 22 and open in July, with two nights from £3,590.