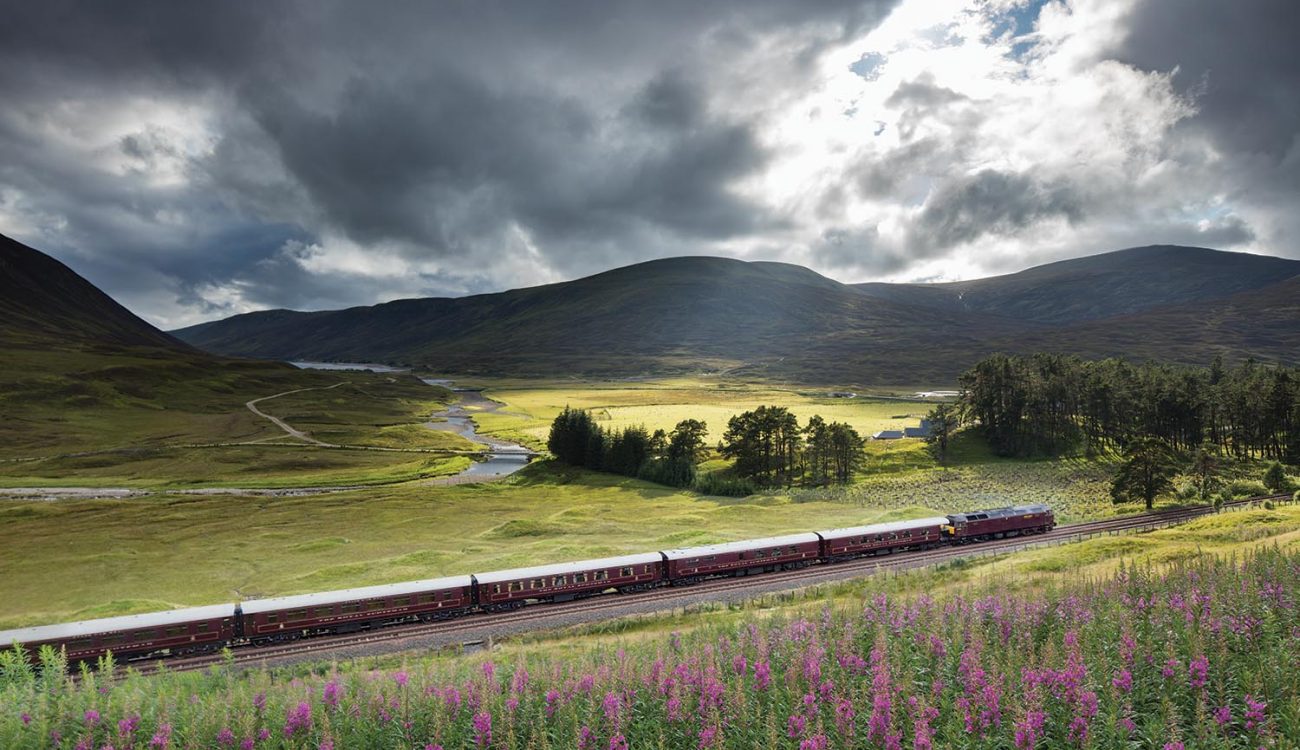 For luxury and service, a tour on the Belmond Royal Scotsman is unsurpassable. It also offers matchless scenery and the chance to see behind the scenes and visit houses not usually open to the public.

Friday lunchtime at Edinburgh’s Waverley Station. A bustling scene, as people buy newspapers and sandwiches before rushing off, tugging suitcases, to their trains. Not so our party, leisurely boarding the Belmond Royal Scotsman, our luggage spirited away to our cabins.  We are piped over a red carpet by a bagpiper in bearskin and kilt. All this sets the tone for four days of ineffable luxury during which we have to do nothing but enjoy ourselves.

We are plied with Laurent-Perrier in the observation car so much like a country drawing-room that it seems almost surprising when the train begins to move. Our cabins are equally comfortable, with a distinctly tartan theme. Slippers and dressing-gowns are provided, along with toiletries and white fluffy towels in the shower room. The latter are changed several times a day by staff who are always on hand. There’s even a spa for a muscle-pummelling massage.

Our tour, Historic Homes and Gardens, Autumn, is a new itinerary, planned by our guides, photographer Patsy Floyd and garden writer Susan Chivers. It takes us on private visits across northern England and southern Scotland, and through majestic scenery. We glimpse the Gateshead Bridge, and Durham Cathedral above the River Wear, and journey along the historic 70-mile Settle to Carlisle railway, over the spectacular Ribblehead Viaduct. Our first stop is Alnmouth and the late 18th-century Howick Hall. It was home to Charles, 2nd Earl Grey, prime minister and architect of the Great Reform Bill in 1832. The tea bearing his name was blended for him by a Chinese mandarin, using bergamot to offset the limey spring water at Howick. Our guide is head gardener Robert Jamieson, who has worked at Howick for 30 years. The garden

features a botanically significant collection of trees and shrubs, amassed by the present owner, Charles, 2nd Lord Howick, from plant-hunting expeditions in China, Korea and Japan. Twelve and a half thousand trees and shrubs represent 1,800 species through the arboretum and the Long Walk stretching a mile and a half to the sea.

We have a private invitation to tea at Chipchase in Northumberland, a Jacobean mansion built round a 14th-century defensive pele tower. Open only a few days a year, Chipchase, home to Jonathan and Zoë Elkington, and their two young children, has been in Jonathan’s mother’s family since 1862. We learn of the challenges involved in maintaining a Grade I listed house, extensive gardens and a shooting and fishing estate. In a commanding position above leafy ridges, it is surrounded by parkland with Wellingtonia, Douglas fir and giant redwoods. A 106-year-old tortoise lives in the walled garden, planted with cordons of apples, beds of vegetables and cut flowers. The 13th-century chapel, updated in 1783, is the burial place of generations of Chipchase owners.

Another exclusive visit is to Fawe Park, a late-Victorian, grey stone, wisteria-clad house with extensive gardens of annuals bright against the dark waters of Derwentwater.  In 1903, the house was let to Beatrix Potter’s father, and, flushed with the success of The Tale of Peter Rabbit, Potter sat down here to write about Peter’s cousin, Benjamin Bunny. Over coffee and home-made biscuits, we compare photographs of the vegetable garden with Potter’s illustrations for the book. Hutton-in-the-Forest owes its origins to the border raids of the 14th century, with a pele tower at its heart. Since 1605, the Cumbrian house has been in the Vane family, with a long gallery dating from 1630, and a central, classical section built in 1680. In about 1830, the architect Anthony Salvin designed a neo-Gothic tower and added castellations to the south front. We are entertained to lunch by Lord and Lady Inglewood in the portrait-hung dining-room before being taken on a tour of the house. Highlights include the ceiling of the long gallery, designed by Salvin, a Mortlake tapestry on a landing and a cantilevered Salvin staircase. →

The gardens have been enhanced by Lady Inglewood, who has cleared banks of rhododendrons to create a wildflower garden. The walled garden is framed by walls dating from 1730, and by yew hedges planted by Margaret, Lady Vane, at the turn of the 20th century. Lady Inglewood has enriched the planting here. In September, verbascum, lysimachia, heleniums, helianthemums, hemerocallis and Michaelmas daisies give great blasts of colour, while fruit trees, some from the 19th century, in candelabras, cordons along paths, and espaliered against walls, are loaded with apples, pears and quinces.

Back into Scotland, we explore the Garden of Cosmic Speculation at Portrack. Created over the last three decades by landscape architect and theorist Charles Jencks, this is a garden of ideas in the 18th-century sense, with sculptures and installations expressing the beauty of abstract scientific ideas to non-scientists. The Black Hole terrace, for instance, has a swirling pattern of grass and stone representing the implosion of a star. Again, we have an insider’s view, shown round by Jencks’s son, John, who talks of watching his parents struggling to realise their plans on 30 acres of rolling, tree-fringed landscape.

Last port of call is Drumlanrig Castle, in the bare lowlands of Dumfries and Galloway.  The pink stone castle, built between 1679 and 1691, belongs to the 10th Duke of Buccleuch and 12th Duke of Queensberry, and has a collection of over 700 paintings, including works by Holbein, Rembrandt, Breughel, Teniers and Van Dyck. Among these, in the dining-room and morning room, we enjoy champagne and canapés.

Forty acres of formal gardens feature parterres and a Victorian-style rose garden. In woodland is a massive weeping beech (Fagus sylvatica ‘Pendula’); the largest in the UK, it was planted in 1800. There are also a red oak (Quercus rubra), planted in 1972 by the American astronaut, Neil Armstrong, and the first British-planted Douglas fir (Pseudotsuga menziesii). The seed was brought back from America by the early 19th-century plant hunter, David Douglas, and planted by his brother, John, the clerk of works at Drumlanrig.

A constant is the luxury of the train. On each return, tartan-clad staff welcome us with trays of drinks, such as sloe gin punch or cranberry and apple juice. Before dinner, we choose from 20 different gins and snack on savoury canapés. One evening, dinner is salad of west coast crab, quail’s egg and caviar, sweet pepper reduction and toasted sourdough, accompanied by a 2016 Sancerre. The main course is succulent loin of Pentland lamb, with a 2014 Ribera de Duero, and then glazed dark chocolate tart with cherry sorbet, served with a sweet Coteaux de Layon. Other evenings offer baked fillet of halibut, and supreme of guinea fowl, the latter matched with a 2014 burgundy. Lunches include a tomato and mozzarella risotto, and fillet of cod with potato and fennel salad.  This culinary magic is conjured up by the chef and his team in a train rattling along at over 100 miles an hour. On two evenings, we are entertained by Highland singers, and, after a final formal dinner, the passengers – from America, Brazil, Switzerland and South Africa – join in the Scottish dancing, with varying degrees of success.

Tuesday morning finds us back at Waverley, with our attendants, having catered to our every whim for four days, lining up to wave us off to round off a memorable tour.

Majestic mountains, glistening lakes, cascading waterfalls, and soft light over the fells, tarns and woods. Another Place, The Lake, is perfectly situated on the shores […]