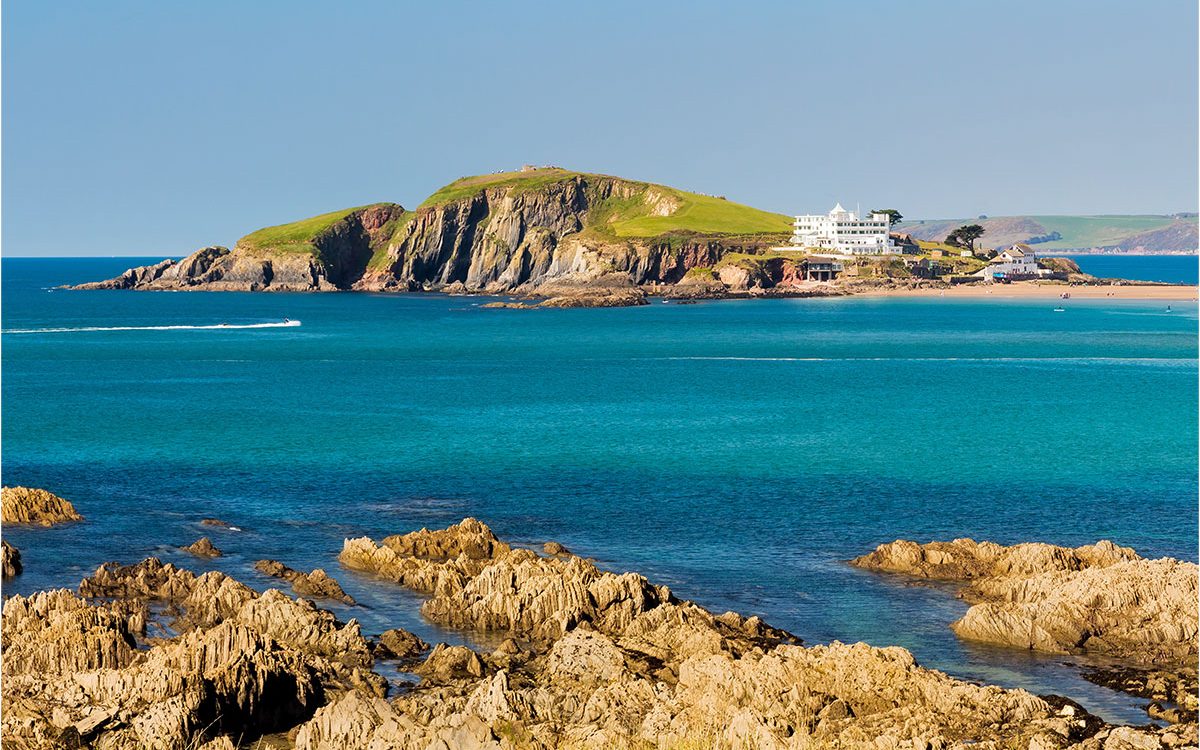 Unrivalled in location, Burgh Island Hotel sits atop its very own tidal island off the coast of South Devon and is accessible by foot or car only at low tide, twice a day. At high tide, it is possible to reach the island via its unique sea tractor, which can navigate its way through almost six metres of swell. As the tide rises from either side to cover the beach of Bigbury (a notable attraction in its own right and recognised as one of the country’s best beaches), the hotel’s occupants are transported back in time to their very own microcosm of 1930s glamour.

Burgh Island has an eclectic history of smugglers, celebrities and culture alike. Known as the second home of Agatha Christie and the setting for her 1939 novel And Then There Were None, it has also been frequented by a number of famous faces, including Josephine Baker, Sir Winston Churchill and President Eisenhower. It features a unique architecture, including the addition of the Captain’s Cabin of the HMS Ganges – a warship – in the 1930s, which is now used as the Nettlefold restaurant, an excellent place to dine on seafood. After parking at Bigbury-on-Sea on a blustery November afternoon, we were collected by the wonderful hotel driver, Richard and transported to the island. Here, we were seated in the Palm Court and handed a flute of Champagne. In doing so, we had the perfect opportunity to soak up the art deco ambience and oceanic views as we waited for our room to be prepared. Despite the shoddy weather and howling winds battering the hotel from all sides (which in itself was fantastically atmospheric) we sat bathed in light in the Palm Court, thanks to its impressive kaleidoscopic domed ceiling. Fresh flowers adorned the bar top, and the velvet chairs were so plush and comfortable that we sank instantly into a luxuriously comfortable state of bliss. Upon being shown to our room – the Nettlefold Suite – we were impressed with its warm and inviting palette of bronze and brown. Despite the November weather, our room was cosy and welcoming, with lovely thick carpets and bedding. The Nettlefold includes a fabulous double bed, which gifted us with the best night’s sleep we’d had in a long time, as well as a separate sitting room. A balcony ran the length of the two rooms, the perfect place to sit with a pair of binoculars (kindly provided) to look over the mermaid pool and far out to sea. We were told that on some occasions you may be lucky enough to spot seals perching upon the rocks below.

“Burgh Island has an eclectic history of smugglers, celebrities and culture alike.”

As part of our stay we were offered a complimentary seven-course taster meal, which required us to dress our best in full-black-tie attire. We started in the Palm Court Lounge with canapés and cocktails before being brought through to the ballroom. With scenes of a 1930s dinner party adorning the walls at the far end of the room and the accompaniment of a jazz piano player throughout all courses, the ballroom oozes sophistication.

The chandeliers sparkled overhead as we were served up exquisite cuisine, sourced from high-quality local produce and provided with impeccable service throughout. The staff were friendly and attentive, and both the standard and meat-free options were a delight. No detail was overlooked as the food both tasted delicious and was presented impeccably.

“One of the country’s oldest inns, the Pilchard has been standing on Burgh Island since 1336 – almost 700 years”

Breakfast in the Nettlefold Restaurant the next morning was very tasty too. With a variety of options, including cooked breakfasts and pancakes, plus a continental selection of freshly baked pastries and breads, we were able to start the day right.

Being able to look out of the windows at the ocean views and watch windsurfers flying across the waves as the tide went back out was a bonus.

One of the country’s oldest inns, the Pilchard has been standing on Burgh Island since 1336 – almost 700 years. Originally quenching the thirst of local fishers and then smugglers, its old-fashioned charm and character still remains. Offering a more laid-back setting than the hotel itself, the Pilchard serves up lunch and dinner, though it is advised to pre-book because it can only seat a limited number.

The Pilchard has an impressive history of its own, with notorious smuggler Tom Crocker using it as his hideout in the 14th century. Unfortunately for Crocker, he was caught and shot on the inn’s doorstep by the authorities.

At low tide, make the most of Bigbury Beach’s golden sand or try your hand at swimming and surfing.

Alternatively, take a leisurely stroll around the island and hotel grounds, go for a dip in the island’s private outdoor mermaid pool or try your hand at a game of tennis. For those wishing to stay inside, treat yourself from a range of spa treatments or kick back and relax in the film room.

The hotel also offers a snooker room, live music and ballroom dancing twice a week, and my personal favourite – a murder mystery night.

If you’d like to venture further afield, Bigbury-on-Sea and the nearby towns of Salcombe and Kingsbridge are accessible by crossing the sand – but be sure to make it back before the tide rises!