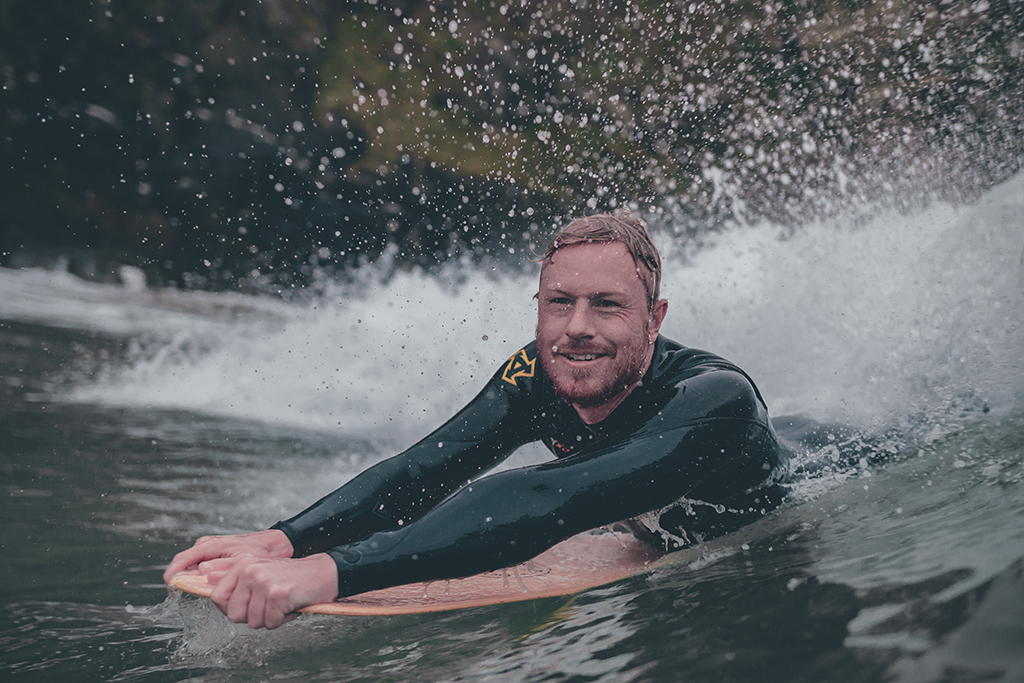 Dick Pearce have been producing beautiful, hand-crafted wooden bellyboards at their seaside workshop in Cornwall for over a decade. We head for the beach to meet the man behind the board…

The Cornish coastline is renowned the world over for its expansive white beaches, aquamarine sea, rugged cliffs, small coves and quaint harbours. It has been a surfing destination for decades, but at the same time retains a quirky, independent vibe that epitomises slow living, the beauty of the natural world and taking things easy. If it feels idyllic to visitors, that’s because it is.

In Newquay, on Cornwall’s wild Atlantic coast, Jamie Johnstone is busy in his oceanside workshop cutting, shaping and bending plywood to a precise technique that is nearly 100 years old, and a closely guarded secret. Jamie is making bellyboards – simple wooden boards, cut in a narrow shape, with rounded ends and gently curved tips. The boards are stamped with his company’s playful logo, and painted in bright, sunny colours. Everything about them speaks to a passion for surfing, but also a commitment to timeless quality, heritage, fun and the unadulterated thrill of being in the ocean and riding its waves.

“Fun. Connection to the ocean. Simplicity,” says Jamie. ““These boards are made to get people in the sea, to get them surfing, to get them smiling. What we love about bellyboarding is the pure and simple fun that you can have on a piece of plywood. And this is ultimately what drives the business.”

Jamie has been at the helm of Dick Pearce Bellyboards for a decade, after he and his business partner Andy bought the company in 2010 – although bellyboarding itself has been around for nearly 100 years.

Bellyboarding – which in originated in Hawaii – arrived in England in the early twentieth-century. Influenced by what their Commonwealth comrades had told them about, British soldiers returning from the trenches of the First World War, brought back ideas about the narrow wooden boards we know today, and they soon became an intrinsic and much-loved part of British beach culture.

Charles Pearce, who initially ran a manufacturing business from a small workshop in South Molton, was inspired by the ‘surf-riders’ he saw on the local beaches and began to experiment with making the boards himself. He was so good at it, that in the years after the Second World War, Charles Pearce and Sons’ wooden boards became a fixture on the beaches of the Southwest.

After Charles died, he passed the business onto his son Dick, who, born and raised in Devon, immersed himself in the surfing culture, and became a true champion of British bellyboarding. For fifty years, he stuck to the family’s time-honoured production methods and materials and he refused to compromise on quality.

When Dick died, Dick’s widow asked Andy, a long-time friend and surf shop owner, if we wanted to take over the business, along with his business partner Jamie. “There was one catch,” explains Jamie. “The original manufacturing methods used by Dick’s father were a safely-guarded family secret. Andy had to commit to buying the business before he was allowed to see anything of it.”

Andy agreed, and the business, along with the original workshop and beautiful old wood-working equipment, passed into Andy and Jamie’s careful hands.

Dick’s commitment to only making wooden boards, even in the face of competition from disposable, imported, polystyrene bodyboards, is something Andy and Jamie have taken forward with passion. Beach lovers themselves, the company is determined to resurrect this wonderful piece of British heritage, not only for posterity reasons, but also because of the environmental impact of disposable boards.

“Since the introduction of cheap foam boogie boards in the 1980s, there are now huge problems with these ‘disposable’ boards – which break quite easily – getting dumped at the beach in the summer holidays and polluting the seas,” says Jamie. “We want to bring the bellyboard back to its former glory. And it’s so satisfying to see more people taking up riding plywood again.”

Sourcing their wood from sustainably-managed forests in Europe, the plywood the company uses is carbon neutral in its growth and produces very little wastage. “It’s also incredibly strong, meaning our boards will last a lifetime,” says Jamie. “Sustainability is incredibly important to us. Outside of the bellyboards, we try to outsource all our accessories locally. Our board bags are made by the sailmakers in Padstow, and we are working this year on bags made from old sail cloth.”

Preserving and continuing to make the boards in the same way they have always been produced is central to the brand’s success, but also clearly something Jamie and Andy are personally passionate about too. Their workshop is now based in Newquay, where all the boards are cut, boiled, bent, sanded, sprayed and screen-printed, using an original template that’s been used for over 70 years. The team also use a lot of hand tools and original equipment from the Pearce family, which Andy inherited when he bought the business. “It’s a very dusty process in the workshop, but we love it,” says Jamie.

The company also uses the traditional bending racks that have been used in board-making for generations, and have created around 10,000 boards in their time. “They’re rough and ready and all the boards come out with different bends, but we like that because it makes them all individual and gives them their own character,” says Jamie.

It’s clear that for both men, Dick Pearce & Friends is as much a passion project as it is a business. Jamie and Andy are fiercely protective of both the heritage that has come before them, and their commitment to promoting and continuing the culture of bellyboarding for generations to come.

“The design of boards has remained the same over 60 years – and we are stoked to be continuing the tradition and re-introducing people to this form of wave riding.” Passionate surfers themselves, who learnt to surf using bellyboards, Jamie explains how the life in Newquay – both personal and professional – is tied to the sea. Their workshop is right in the heart of Newquay, in between Fistral and Towan beaches, and both Jamie and Andy often nip to the beach for a surf at lunch or after work to wash off the dust.

“I’ve got very happy memories of learning to surf on my grandparents’ bellyboards from the sixties,” remembers Jamie. “The boards are still in the shed to this day, with the original (faded) logos on them. Bellyboarding was, for both of us, where our love for the ocean began. Our boards are lovingly produced to last a lifetime, and we hope you’ll pass your board on to the next generation, just like ours were passed down to us.”

Jamie, who lives a few steps away from Fistral Beach, and surfs nearly every day, says that for him part of the magic of the business is being part of a community of makers and creators who are passionate about what they do. “I find being in Cornwall an inspirational place to be. Bellyboarding is the earliest form of waveriding in Cornwall – it’s great to continue the tradition of making and riding boards here on our beautiful beaches.”

“What’s good about bellyboarding is how simple it is. It’s just a bent bit of plywood but it is so fun to use, and anyone can do it. Whether it’s a little kid or your grandmother.”

“Just give it a go,” says Jamie. Walk out to waist deep water and look for clean breaking waves.

Position your board facing away from the waves, with the curve facing upwards, and make sure you hold your board tightly against your body as you take-off.

And then, just kick off into waves, resting your belly on the board and allowing the wave to guide you towards the shore.

You want to take-off just as a wave is breaking behind you.

“The good thing about bellyboarding, if someone’s never tried it before, it’s fun and easy. It’s a really good alternative to bodyboarding,” says Jamie. The more you practise the more you’ll improve your timing and technique.

“You can take flippers out to make it a bit more exhilarating,” says Jamie. And, when you get more confident, you can catch bigger waves and tubes.