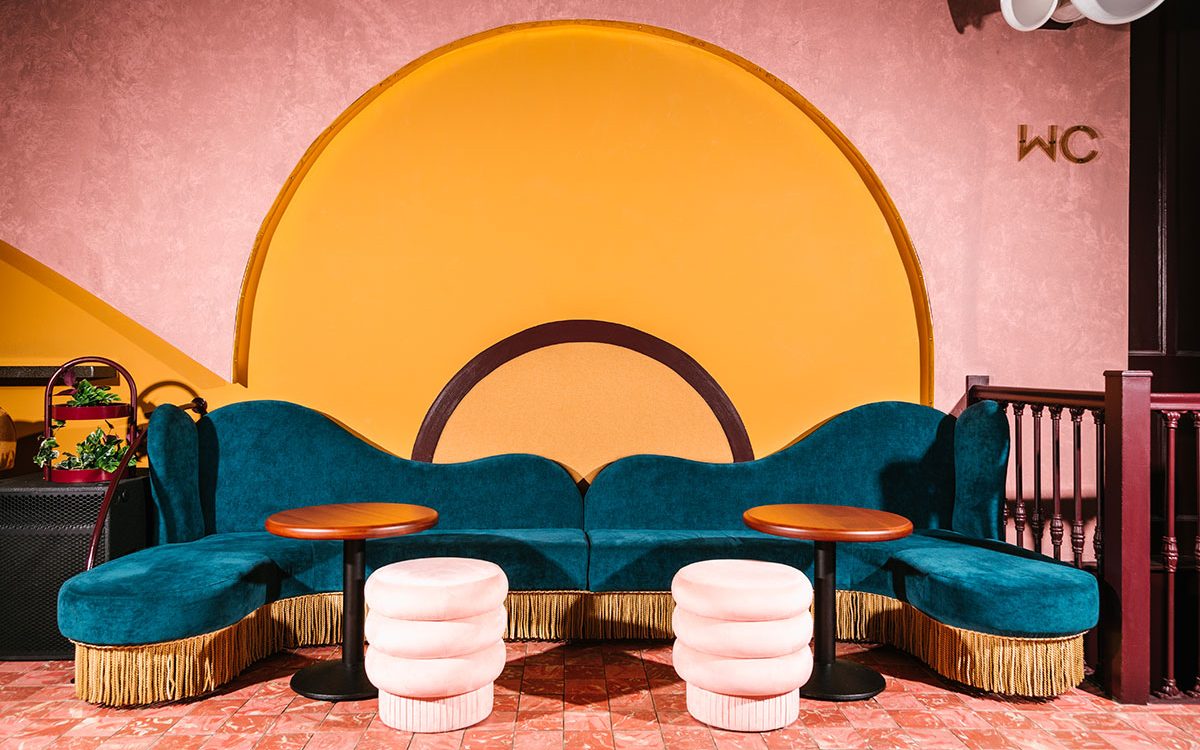 Scotland’s capital has come to life after months of pandemic hibernation, and the delicious news for visitors is that there are some brand new dining and drinking establishments to welcome them. Karyn Noble is just back from Edinburgh with the inside scoop for your next getaway…

Edinburgh’s food scene has been inspirational to watch over the past decade – a flurry of independent restaurants with boundary pushing chefs showcasing Scotland’s finest home-grown produce. It’s an easily walkable capital city, and diving down into quirky whisky dens or up to cosy rooftops to admire the dramatic spires of its Old Town makes for memorable barhopping too. The buzz around some of its new openings should not be underestimated. Book well in advance to secure these hot spots for your next long weekend away.

Open since 22 July 2021, the 180-seater Superico Bar and Lounge has been wowing Edinburgh’s New Town with its bold Latin-American influenced flavours and Art Deco design (superico.com/#99). Settling into a bright yellow booth, it’s not difficult to see why it’s been shortlisted for an award in the Bar, Club & Lounge category at the Hospitality Design Awards (held in New York in September 2021). A massive light feature, not unlike a gleaming full moon, dangles over the entrance, and the room practically glows with a vibrant sleekness.

Indulge in house-pressed chips (70 fine layers of potato, no less!) with chipotle crema or dulce de leche doughnuts while sipping on a Smoked Peach Fizz (Chivas Regal Mizunara, Del Maguey Mezcal, Creme de Peche, Earl Grey tea, lemon and soda) or a freezer-fresh Padrón Martini from a drinks list that spans cocktails, spritzes and frappés (all designed by Edinburgh mixologist Mike Lynch), as well as a tidy collection of spirits and liqueurs, alongside nonalcoholic offerings.

It might sound like a drinking destination, but Casablanca Cocktail Club (casablancacocktailclub.com) is actually the name of the new restaurant for Edinburgh’s oh-so-extravagant House of Gods Hotel (houseofgodshotel.com).

Since it opened in September 2019, the hotel quickly became known for its lavish Orient- Express style rooms and the ‘Treat Me Like I’m Famous’ experience (press a button to summon your butler for cocktails, midnight milk-and cookies, Prosecco, a breakfast hamper with Mimosas). Casablanca Cocktail Club is, unsurprisingly, not at all restrained. “It’s as decadent and opulent as House of Gods is,” says Co-Owner and Director Mike Baxter, from a Gucci-wallpapered room with a gold mirror ball on the ceiling. “Everything we do is the extreme of fantasy. I love this hedonistic idea of you come for dinner but end up dancing on the tables.”

Open since 16 September 2021, the restaurant serves 40 covers (think: thrones for chairs) with bar space for 40 guests, as well as a private dining area for up to 16 people. From head chef Andrew Logie (formerly of Edinburgh’s Galvin Brasserie de Luxe) expect such indulgences as gold-leaf Wagyu burgers served on Versace plates, cheese-and-truffle pizzas, as well as scallops-stuffed chicken wings marinated in Dom Perignon.

It doesn’t get more meta than looking at a slide of a cocktail called ‘Edinburgh’ through a retro Viewfinder, ordering it, then sipping on it from a rooftop bar while looking at Edinburgh Castle. This is Rooftop 51, where you’ll find a whole new viewing perspective atop the Moxy Hotel in Fountainbridge (marriott.co.uk): new brewery themed accommodation on the western side of the city. “Most visitors haven’t seen this side of Edinburgh before,” says Craig Aitchison, Assistant Captain at The Moxy, as he brings some ‘Wee Plates’ from the tapas menu (spanning everything from Baked Mac n Cheese Bites to a Vanilla & Toffee Honey Pot). While the bar (open since May 2021) is named after the 51 different types of beer available (the hotel is on the former Fountainbridge Brewery site, after all), there’s also eight internationally themed cocktails and a short wine list. If the tartan blankets on the rooftop terrace aren’t enough protection against the chill, you can bring your drinks indoors to the in house cinema where there’s the occasional theme night (James Bond was a recent favourite) and popcorn in a variety of wacky flavours.

An incredibly elegant addition to Edinburgh’s restaurant lineup, Rico’s is where modern Italy meets top Scottish produce in a sexy 56-cover space (ricosristorante. co.uk). Consider freshly made pappardelle with a ragù of organic rose veal (from Peelham farm in the Scottish Borders) and generous shaves of black truffle; or an exquisite risotto with East coast crab, shellfish bisque, chilli and coriander from 25-year-old chef Stefano Pieraccini. Open since 9 July 2021 and named after Stefano’s grandfather (Enrico Pieraccini), Rico’s has been extremely popular with the Scots-Italian locals, but there’s also a dedicated space for 20 to sit for a drink (there are three different types of Negronis, just saying) without any obligation to dine, though you may find the genuine warmth from the staff will tempt you to linger over Mortadella Gnocco Fritto or 24 Month Proscuitto San Daniele from the Bar Menu.

If the main venue in Edinburgh’s New Town is fully booked during your visit, you can also sample their pasta from a dedicated stand at Bonnie & Wild Marketplace in the new St James Quarter.

If you’ve always dreamt of making your own gin at a tutored tasting session, then this is the place to do it. Darnley’s Gin have ventured out of their home in Fife and opened a pop-up store right in the centre of Edinburgh in June 2021 (darnleysgin.com/pages/gin-experience). Over the course of 90 minutes, you’ll be guided through the history of their distillery while also tasting three of their delicious gins. You’ll then be presented with all manner of botanicals to sniff and select, as well as guidance notes and a flavour wheel, to create your own gin to take home (along with a Darnley’s blend). If you’re impressed by your own recipe, Darnley’s will even keep your bespoke blend on file and you can order bottles anytime. But if this all sounds like too much work, you can just order a G&T at the bar and sip it from the terrace outside. While it looks like a permanent store, the Gin Experience is in place until the end of March 2022 at this stage, though popularity may mean it becomes an Edinburgh fixture. Let’s hope!

If you fancy castle views while learning more about craft beer, then Cold Town Brewery more than delivers (coldtownhouse.co.uk/cold-townbrewery-tours). Since July 2021, small guided tours have started at their popular microbrewery. Over the course of an hour, you can learn more about the tank-to-tap process from one of the brewers, taste four of the range then decide on your favourite (whether that be a Cold Town Lager, a juicy New England IPA, or seasonal brews, such as the Pornstar Martini Ale or the Chocolate Cake Stout). Then settle in with your pint and a stone-baked Neapolitan pizza either on the roof terrace, the Grassmarket outdoor area, the Pizza & Prosecco Floor or within the Brewhouse; either way, it’s highly likely your views will be pleasingly turret-topped and medieval. And if you can’t see Edinburgh castle and want to remind yourself that you’re in Scotland, order the Holyrood pizza, which has a peppercorn sauce base, crispy bacon, fior de latte, Mull Cheddar…and yes, Chieftain haggis.

Don’t miss this extraordinary £1 billion development in the centre of Edinburgh, one of the largest regeneration projects in the UK. Sixteen years in the making, and after five years of construction, the first phase of the St James Quarter opened to the public on 24 June 2021 (stjamesquarter.com). Much more than a multi-level shopping galleria (it even has its own tartan, not to mention a W Hotel opening in 2022), it offers a broad range of dining experiences.

“Level 1 is family favourites,” says Rochelle Weir, Brand and Marketing Director for St James Quarter. “We have (an area known as) Leith St Eats; in there we have Five Guys, Tortilla, and Maki & Ramen, which is a local business. Level 2 is high street and fashion brands. Level 3 you have aspirational brands and high end names… Level 4 is more of a night-time economy: you can shop until 8 o’clock, come here and eat and drink. We’ve got The Alchemist coming on in autumn, which is a cocktail bar with different food offerings. And also Bonnie & Wild. We should have around 30 restaurants and bars.” It would be easy enough to meet all your gourmet needs in Bonnie & Wild Marketplace alone (bonnieandwildmarket. com). It’s no mere food court, though it’s certainly possible to perch at a table (there’s space for 700 diners) and order coffee, cakes, pasta and pizza. This marketplace features some unique independent Scottish traders in their first-ever stalls (CHIX) alongside bigger names (Masterchef winner Gary Maclean’s first solo venture). There’s MacDuff’s butchers for all your take-away meat needs, a bottle shop, a private events space, a demo kitchen, a living moss wall, photos from the Scottish Landscape Photographer of the Year Awards…don’t be surprised to see a queue to get in.