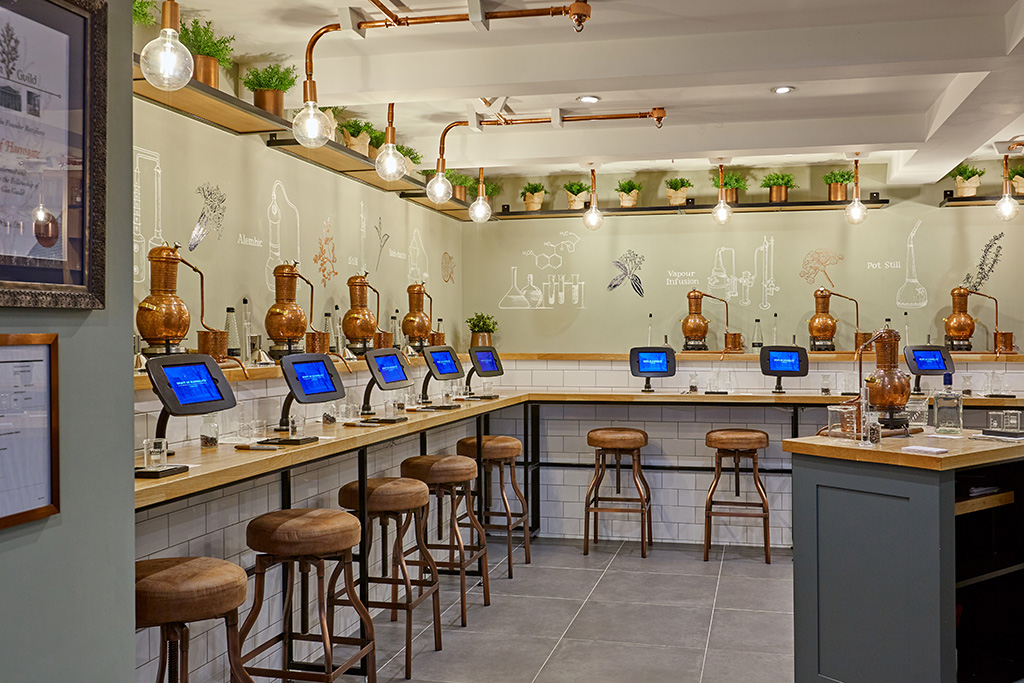 In recent years gin has become one of the great British success stories. Gin has a long relationship with our island’s history. It originated in the Low Countries as genever, a juniper-based spirit. In the 17th century, soldiers returning from fighting with the Dutch in the Eighty Years’ War brought with them a drink that emboldened their allies. They called the phenomenon “Dutch Courage” and the people of London enthusiastically adopted it.

Very soon genever stills were operating all over London. By the 18th century it was a cheap but very dangerous way to get drunk. The fact that it was often laced with turpentine, sulphuric acid or worse only added to its horrendous effects. City aldermen worried that a craze was sweeping Britain and destroying families. In 1751 William Hogarth created a famous etching called Gin Lane showing (among other gin-induced misfortunes) a baby falling to its death from the arms of its inebriated mother.

In an attempt to regulate what people were imbibing, the Gin Act of that same year established and regulated what would come to be called London Dry Gin. The drink that today is a benchmark for sophisticated living began as a way to stop poor miserable people intoxicating themselves to death.

In the 19th century London Dry Gin achieved a new role in the maintenance of the British Empire. Quinine was a useful chemical that could mitigate the symptoms of malaria but its bitter flavour was detested even when diluted as tonic water. By mixing quinine with gin however, the British found they could encourage their colonial staff to swallow the medication and a drink was born that became quintessentially British: the gin and tonic.

Later, at the beginning of the 20th century the USA gave the spirit a new life with the invention of the martini, an acceptable way of drinking, undiluted, with just a hint of vermouth. The writer H. L. Mencken called the martini “the only American invention as perfect as the sonnet”.

Gin and It (Italian Vermouth) was an alternative, a popular sweetened version of the martini. And martinis themselves became literally diluted by the James Bond-inspired fashion for “shaken not stirred” which just made the cocktail unpleasantly watery.

The time was ripe for a renaissance – or “ginaissance” as it is often talked of these days.

Bombay Sapphire led the way in 1987 when the British company IDV created a gin that was flavoured with an unprecedented number of botanicals: almond, lemon peel, liquorice, juniper berries, orris root, angelica, coriander, cassia, cubeb, and grains of paradise.

Not only did this gin have a much more complex taste, but it was marketed in a flat-sided, pale-blue bottle bearing a picture of Queen Victoria. Bombay Sapphire both harkened back to the days of empire but also gave the impression – to a generation new to drinking gin – that this tasty, intoxicating liquor was actually blue.

In the thirty years since Bombay Sapphire told the world that gin was exciting again the number of high-quality British distillers has shot up into triple figures. The makes and varieties of tonics have also greatly increased. London Dry Gin is now made all round the world and not all the best producers are British. Gin Mare from Spain and Monkey 47 from Germany are two that not only hold their own against Bombay Sapphire but have excelled it in complexity.

“In 2016 – known in the trade as the Year of Gin – 40 new distilleries opened in Britain.  It was estimated that British drinkers alone had bought 40 million bottles”

These days 10 botanicals is quite a modest tally. Because of the relative speed at which gin can be produced – drinkable in a few months rather than many years – many Scotch whisky distillers have also begun producing gin (like Grants, the famous whisky distiller who now manufactures Hendricks). Gin certainly improves cash flow when you have to wait years for a return on your whisky investment.

In 2016 – known in the trade as the Year of Gin – 40 new distilleries opened in Britain.  It was estimated that British drinkers alone had bought 40 million bottles. That’s enough to have made 28 gin and tonics for every adult member of the British population, never mind the inexorable rise of the export market.

Recent years have also seen the rise of the artisanal distiller producing relatively small batches of high-quality gin in premises in which they welcome visitors, offering distillery tours, gin history and masterclasses. Here’s our choice of some of the best you can visit in celebration of this quintessentially British spirit:

In a basement by St Bride’s Church lurks the only distillery producing London Dry Gin within the City of London. Two German stills, Clarissa and Jennifer (the Fat Ladies) can be seen at work and the company’s four plain gins in their distinctive bottles (modelled on the dome of St Paul’s Cathedral) can be bought over the counter. The company’s Square Mile Gin is super fresh, dry and yet fruity with hints of lemon balm. Prices from £35pp. 22-24 Bride Lane, London EC4Y 8DT, 020 7936 3636, cityoflondondistillery.com

Head along to the Portobello Star for a lesson in the history and production of gin and enjoy a tutored tasting before crafting your own bottle using a completely unique recipe exactly to your tastes. Masterclass prices from £60pp/Experiences £120pp. 186 Portobello Road, London, W11 1LA, 020 3034 2234, theginstitute.com

Beefeater is the only historic dry gin to be distilled in London today. The distillery tour tells the history of the production in London with extraordinary stories. The experience culminates with a complimentary cocktail – the classic Beefeater Gin and Tonic. Prices from £15pp, or £45pp for a VIP experience. 20 Montford Place, London, SE11 5DE, 020 7587 0034, beefeaterdistillery.com

TOAD has an unusually intensive production even by British artisanal standards.  It produces its own neat alcohol for the stills using grains sourced by an archaeo-botanist who has recreated medieval crops in fields within Oxfordshire. The two stills, Nautilus and Nemo, were designed by the master distiller himself and were welded together by a firm that builds steam-powered railway engines. An exceptionally good value given how much hand-crafting goes into the process. Hints of aromatic cardamom, toasted peppercorns and orange. Prices from £38.76pp. The Old Depot, Cheney Lane, Oxford OX3 7QJ, 01865 767918, spiritoftoad.com

Silent Pool Distillery is located alongside a large pond in the Surrey countryside that’s known as Silent Pool. The distillery itself is in an unremarkable agricultural building, but the Silent Pool’s distinctive turquoise and copper-coloured bottles more than make up for any visual paucity in the location. A complex floral gin featuring 24 botanicals including chamomile, rose, elderflower, Kaffir lime leaf, pear, bergamot and local honey. Prices from £39.50pp. Shere Rd, Albury, Guildford GU5 9BW, 01483 229136, silentpooldistillers.com

Though it only opened in summer of 2016, its illustrious location and impressively sleek and modern design, in the heart of the coastal town of Salcombe, has put this purpose-built distillery firmly on the map for all budding enthusiasts. Complete with tasting bar and school where visitors can craft their own unique gin – distilled using pure Dartmoor water – and take it home. Gin School prices from £100pp. The Boathouse, 28 Island Street, Salcombe, Devon TQ8 8DP, 01548 288 180, salcombegin.com

Learn how gin is distilled in the Edinburgh Distillery’s two stills, curiously named Flora and Caledonia in a 45-minute discovery tour or 75-minute “Connoisseur Tour”, or join a three-hour gin-making class and become your own distiller. And watch this space, as plans have been made for a multi-million pound third distillery in Edinburgh city centre, large enough to welcome 100,000 visitors through its doors each year. Prices from £10pp-£100pp depending on the experience. Distillery & Visitor Centre, Westend, 1A Rutland Place, Edinburgh, EH1 2AD/The Biscuit Factory Distillery, Leith, 4-6 Anderson Place, Edinburgh EH6 5NP, edinburghgindistillery.co.uk

If you would prefer to have your own Gin Guardian taking you on a tour of your chosen city’s finest gin endeavours, then Gin Journey is a great option. Guests are whisked around by gin carriage to world class cocktails bars and era-defining distilleries in Manchester, Liverpool, Leeds and London. The chauffeur-driven tours of each city’s finest cocktail bars are educational and fun — participants learn about the history of gin and its present-day incarnations, as well as taste cocktails along the way. Prices from £50pp, ginjourney.com

The masterminds behind Yorkshire’s finest award-winning Gin brand – Slingsby have launched an exciting new gin experience where you not only learn about which type of gin you should choose to suit your palate, you also have the opportunity to make your own bespoke bottle of gin from scratch! As pretty as gin bottles might be, it’s important to know whether the gin inside, is to your personal taste and preference, and this new experience demystifies the category and allows guests to explore the core categories and profiles from Juniper, Citrus, Spice, Floral, Herbal and Fruit flavours. Taste a variety, pick your own botanicals, distil on your very own traditional mini copper still and bottle with your own personalised label. Prices from £90pp, gift vouchers available. 5-7 Montpellier Parade, Harrogate, North Yorkshire, HG1 2TJ, 01423 541279, spiritofharrogate.co.uk/experiences

Sip gin from a selection of more than 300 while listening to live jazz, or join a masterclass that includes a nip of a vintage gin from the 1950s. 13 Well Court, off Bow Lane, EC4M 9DN, merchanthouselondon.com

Proprietor Philip Whiteman holds a Guinness World Record for stocking the most gins on a commercial premises – 600 from all over the world at the last count. A masterclass is held on the last Thursday of every month. Huddersfield Road, Saddleworth OL3 5EG, theoldbellinn.co.uk

On the mezzanine level of Manchester’s Gorilla, this bar is dedicated to gin and stocked with small batch, hand-crafted distillations — including its home-produced buttered gin and homemade tonic syrups. A wide cocktail list. 54-56 Whitworth Street, M1 5WW, thisisgorilla.com

Two floors with a martini bar on the first floor in the city where Jane Austen penned her most famous books. More than 250 bottles to choose from but closed on Sundays. 2/3 Queen Street, BA1 1HE, thebathgincompany.co.uk

Offering a comprehensive list of cocktails, not only featuring their own spirits but also acknowledging the rich heritage of spirits production around the world. Distillery and brewery tours are also available. Unit GF1, Bow Wharf, 221 Grove Road, London, E3 5SN, eastlondonliquorcompany.com