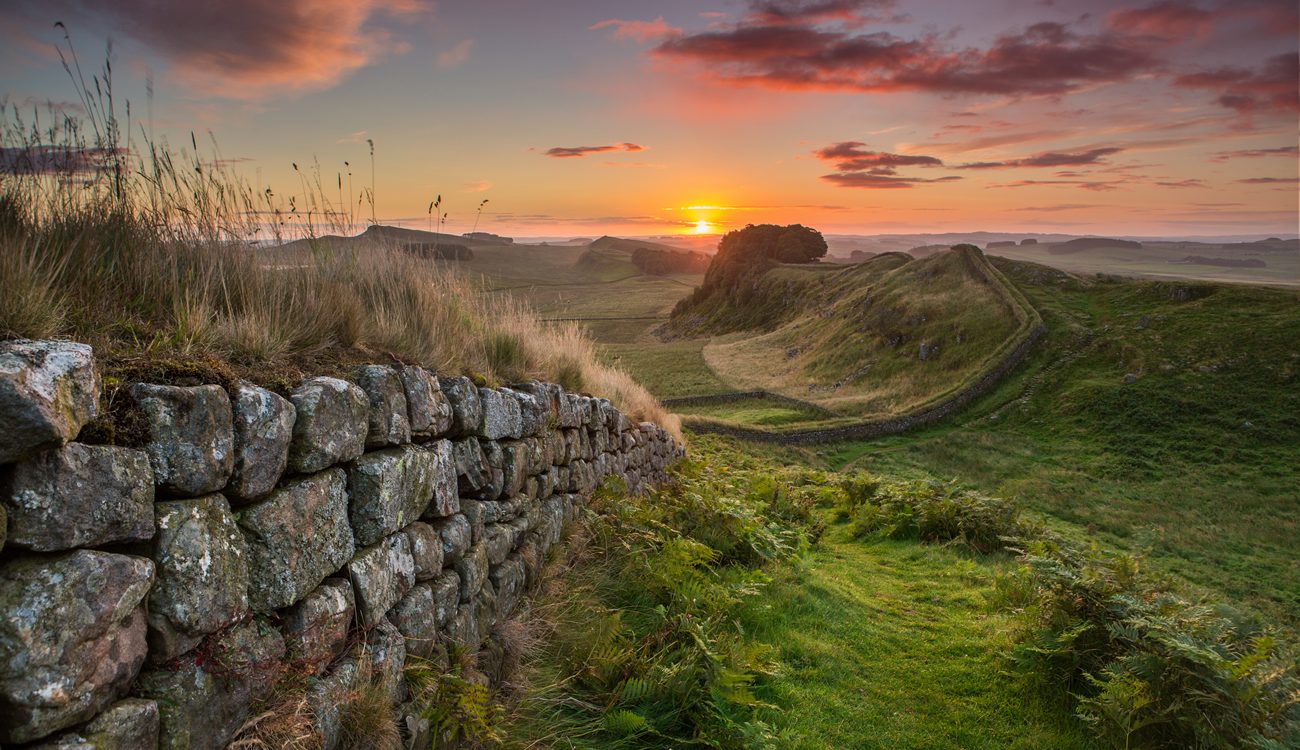 A Wall which did get built! Striding right across England, this coast-to-coast barrier marked the northern edge of the mighty Roman Empire. The great emperor in Rome must have decided ‘enough is enough’ and that there was little to gain from the huge effort required to subdue Britain’s warlike northern tribes. What he ordered to be built, nearly 2,000 years ago, is still recognisable today and, although much of the stone has been recycled into later buildings, enough remains, particularly in the more remote, central section, for Hadrian’s Wall to have become a UNESCO World Heritage Site and a national cultural icon.  Measuring 73 miles in length, the barrier was three metres wide and up to six metres high and a deep defensive ditch, the ‘vallum’, was dug behind it. With a series of permanently-manned forts, every mile, and garrison towns every five miles, this was a major construction enterprise and is the largest Roman artefact to survive, anywhere in the world.

Regardless of its purpose, or its effectiveness, this edifice, running from Solway Firth to the banks of the River Tyne, has the good fortune to have been placed in a most beautiful part of rural Northern England, ruggedly undulating, mostly agricultural and sparsely populated, criss-crossed by country lanes and dotted with sleepy villages. No wonder, then, that adventurous tourists, from all around the world, are drawn to the region, awed by the historic context and the glory of its setting. Whether hiking (there is a National Trail path along the full length), cycling, driving or travelling by the excellent AD122 bus, the Wall will weave its magic and the various amazing museums and archaeological sites along the way will enthral and inspire even the most jaded traveller. There are too many to list here and a little research will help you choose your favourites. Unmissable, among the many points of interest, are the excavated remains of forts at Birdoswald, Housesteads and Chesters, each of which is maintained by English Heritage and offers unique displays and exhibitions, and the world-famous Roman towns of Corbridge (also English Heritage) and Vindolanda, with its renowned museum of artefacts and treasures discovered during the 45 years of annual digs. Whatever you do, don’t rush it! It has stood for nearly two millennia and deserves a leisurely visit, as you leap back in time.

The Twice Brewed Inn (there is a nearby village curiously named Once Brewed) is a characterful modern roadhouse, sympathetically developed from a 16th century farm and outbuildings, offering a warm welcome, hearty portions of home-cooked food, using locally-sourced ingredients, and good selection of wines and beer, some from the pub’s own micro-brewery, including one called ‘Ale Caesar’!

Perfectly situated on the B6318, known as The Military Road, close by Steel Rigg, one of the most dramatic parts of the Wall, the inn is hugely popular with tourists, hikers and bikers, being at the crossroads of the Pennine Trail, up the ‘spine’ of England, the path alongside the Wall and two designated Cycleways.

In the bar and restaurant we heard many languages, and many accented versions of English, as kindred spirits broke down barriers and the typical social interaction followed. The modern, en-suite accommodation is compact and well-equipped, providing a well-deserved place of peace and comfort before the new day’s challenge. First, enjoy the fantastic breakfast!