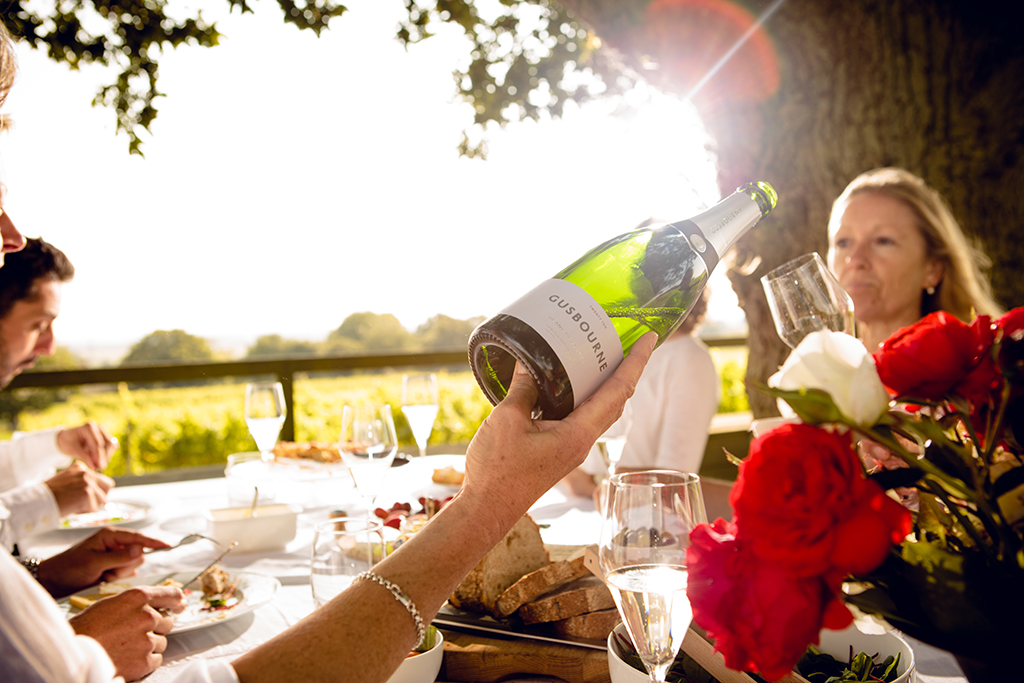 In search of sparkling wine

The Royal Family serves it. So does 10 Downing Street. English Sparkling Wine is a fizzing success. Even Taittinger is getting in on the act.

Ten years ago in London a rumour circulated that Prince Charles no longer served champagne at Highgrove but an English sparkling wine called Nyetimber. The wine was being produced at a vineyard in the West Sussex South Downs. Planting had begun in 1986 after geological similarities were discovered between southern England and the Champagne region of France.

By 2010 the Nyetimber secret was out. The vineyard’s Classic Cuvée beat Bollinger in a blind tasting and was named best sparkling wine in the world. Suddenly it was being served at 10 Downing Street and replaced champagne at the Queen’s Diamond Jubilee celebrations in 2012.

Since Nyetimber swept the British Isles and Britain’s export market, other excellent sparkling wines have been discovered. They cannot be called champagnes because the grapes are not grown – and the wine is not produced – in the eponymous French region, but the soil is similar, the method is the same and the grapes – Chardonnay, Pinot Noir and Pinot Meunier – are just the same as used in Champagne. Once upon a time the idea of English “champagne” would have been a joke, but the right climatic and geographical conditions were always there in the south of England.

The British just had to prove to themselves that it could be done. Britain has enjoyed a long, happy connection to the sparkling wines of Champagne. At the same time that Dom Pérignon was rigorously trying to eliminate the bubbles from wines produced at his abbey in Saint-Pierre d’Hautvillers, Londoners were importing the wines of Champagne specifically because they enjoyed quaffing the sparkle. In 1662 the Royal Society discussed a paper that sought to explain secondary fermentation in the bottle and soon after Sir Kenelm Digby set his glassworks the task of creating a bottle strong enough to hold this fashionable new wine. Up until Digby’s intervention sparkling wine had a worrying tendency to explode during its secondary fermentation.

However, it wasn’t until 1984 that a commercial vineyard in England managed to produce traditional method sparkling wines although it used German grapes. Two years later in 1988 a vineyard was planted at Nyetimber with the three traditional champagne grapes. The first sparkling wine from Nyetimber was released in 1997 and immediately won a medal. Other vineyards followed where Nyetimber led. Some – like Denbies in Surrey – were existing still wine producers who branched out into sparkling wines. Many more, like Gusbourne in Kent, set up business with the intention of creating sparkling wine.

Today, the majority of wine produced in England is sparkling. Current production levels suggest 12million bottles will be produced in 2020 with the three Champagne varieties accounting for over 70% of all grapes planted.

There are now over 100 wineries in England producing sparkling wines, including the French Champagne house Taittinger which planted its first vines in Kent in 2017.

Many have visitor centres and even dining rooms. Those that do not often welcome tours and arrange tastings. Here are seven to visit – from Kent to Cornwall.

This beautiful half-timbered site in West Sussex has been key to the transformation of England’s sparkling wine industry. As a very busy winery producing over a million bottles a year, Nyetimber is not normally open to the public, but there are six open days during the summer months. Tickets cost £35 and include tastings. There is also the opportunity to stay on for a dinner cooked by top UK chefs with Nyetimber-pairings (£150 pp). ► nyetimber.com

Where to stay: Amberley Castle

This 19-room converted castle lies nine miles south of Nyetimber. Ancient Amberley has had many owners including the 15th Duke of Norfolk who restored its medieval portcullis in Victorian times. Charles II visited the castle twice after the Restoration. Family-owned for centuries, it became a country house hotel in 1989. ► amberleycastle.co.uk

Creamy texture with notes of lemon and brioche. Nyetimber’s vineyards all face south, ensuring the ideal conditions for the slow ripening of the grapes. This orientation results in optimum levels of acidity and complexity. Details of each bottle’s history can be found by entering the number on the back label on Nyetimber’s website

Ridgeview was recently crowned one of the best vineyards in the world (No 36 in the Top 50 and the only UK entry). Its Cellar Door is open daily for complimentary tastings and sales. Ridgeview is very visitor-friendly with private tours by appointment, exclusive dinners in collaboration with top chefs, picnic hampers for sale to those who want to eat in its wine garden and an annual Ridgefest in August. ► ridgeview.co.uk

Where to stay: Ockenden Manor

This sixteenth-century manor house only became a hotel after World War II. Standing six miles north of Ridgeview, it offers a fine-dining restaurant, elegant drawing room, croquet lawn and an outdoor swimming pool fed by the hotel’s own spring. Ridgeview has long been the house “champagne” at Ockenden Manor and the hotel will arrange visits to the winery for guests. ► hshotels.co.uk/ockenden-manor

Ridegeview’s signature blend is predominantly Chardonnay, with Pinot Noir and Pinot Meunier adding depth and character. Bloomsbury is light golden in colour with a fine, persistent mousse,  citrus fruit aromas and even hints of honey. The company also produces a Fitzrovia Sparkling Rosé and a rather more expensive Rosé de Noirs.

This family-run Hampshire winery was founded in 2004 and now has 15,000 vines. Owner Simon Bladon claims that when he attended a furniture auction in 2003 he was handed a glass of English sparkling wine for the first time and had a Damascene conversion. Bladon bought no furniture that day, but came home and began planning to cultivate vines in the old hop fields next to his house. ►  jenkynplace.com

Where to stay: The Merry Harriers

The Merry Harriers is a picturesque, wonderfully eccentric pub with rooms, 18 miles south east of Jenkyn Place. Guests can stay above the bar or in some luxury shepherd-hut caravans in the garden. Best of all, the pub owns a herd of llamas who are very friendly and can even be taken for walks by guests. ► merryharriers.com

A beautiful golden wine with aromas of green apple, floral hints and minerality. Jenkyn Place wines are said to age well so this is also one for laying down. The vineyard also produces a Rosé and Blanc de Blanc. Dermot Sugrue, Jenkyn’s winemaker, was also responsible for some of Nyetimber’s early success, hence the accolades.and a rather more expensive Rosé de Noirs.

Appledore is said to be the second-driest place in England, which has helped Gusbourne’s vineyards prosper. Self-guided tours cost £25 and end in the beautiful modern wooden tasting room known as “The Nest”. Hosted tours are also available for £65pp and feature rarer wines and lunch in The Nest. ► gusbourne.com

Where to stay: Chilston Park

17 miles north of the Gusbourne Estate, Chilston Park is like spending the weekend at the country house of a gentleman acquaintance. It became a hotel in 1983 but still has the feel of a family home with an eclectic collection of paintings and a very small bar tucked under the great oak staircase.

This wine clearly benefits from being grown on clay and sandy loam soils on a south-facing escarpment. It’s bright gold in colour with hints of apple, pear and citrus and an elegant finish. Gusbourne produces just three wines: Brut Reserve, Blanc de Blancs and Gusbourne Rosé. So popular is the wine that people subscribe in advance to be guaranteed 12 bottles a year, four of each.

This eighteenth-century estate was established as a farm by Thomas Denby but today contains the largest vineyard in Britain, a visitor centre and – surprisingly – the Surrey Performing Arts Library.  Many wines, still and sparkling, are produced at Denbies and there is also an on-site brewery. A range of tours is offered starting at £11.50 pp. ► denbies.co.uk

Where to stay: Denbies Vineyard Hotel

Actually on the Denbies Wine Estate itself. Our surprise entry, the recently upgraded farmhouse B&B, following a £4m transformation, has opened as the UK’s first-ever vineyard hotel. Stay in one of the 17-bedrooms in the new Denbies Vineyard Hotel and enjoy outdoor dining in the orangery garden restaurant, in the heart of the wine-making experience. ► denbies.co.uk

Denbies produces a wide range of still white wines as well as eight sparkling wines, some named Cubitt after the master builder, Thomas Cubitt who redesigned the estate in the nineteenth century. The Cubitt Blanc de Blancs 2013 won silver in Decanter’s 2019 World Wine Awards. There are notes of apple and citrus with hints of vanilla and minerality.

Where to stay: Camel Valley Estate

There are two barn conversion cottages on the estate and a complimentary bottle is supplied for each new arrival. During fishing season, guests can, by arrangement, use the vineyard’s own private stretch of the Camel River. Salmon and sea trout have been caught here by experienced anglers. ►camelvalley.com

Because of a damper climate than Sussex, Camel Valley Vineyard blends its Chardonnay and Pinot Noir with 50% Seyval grapes. Moreover the planting on a loam soil rather than the traditional chalk slopes of southern England results in a very fresh wine, fruitier than most UK sparkling wines. Camel Valley Brut Reserve has won many awards and has a citrus character with a touch of honey on the palate.

Not all British sparkling wines come out of England. Wales produces 2% of the UK output. Glyndwr Vineyard was established in in 1979, making it the oldest family estate in Wales. Lying on the same latitude as Sussex (51°) but far to the west, this estate exists in a climate that is distinctly damper and chillier than Sussex and Surrey. For this reason the vineyard eschews Chardonnay, Meunier and Pinot grapes in favour of single grape variety that suits sparkling wines, Seyval Blanc. ► glyndwrvineyard.co.uk

The estate offers two self-catering bungalows in its gardens. Both have views of the lake and are surrounded by lawns, orchards and a 6-acre vineyard. There are also friendly llamas on site.

Seyval Blanc vines ripen early and are well suited to cooler climates. The resulting wine has hints of pears and apples with small sharp bubbles. It’s a light, floral, fruity, medium-dry white with hints of apple and a clean, fresh finish. Glyndwr also produces dry white, rosé and red wines, and a Welsh brandy. Its wines have been served at European State banquets, in the restaurant at the House of Lords and at a NATO Summit. 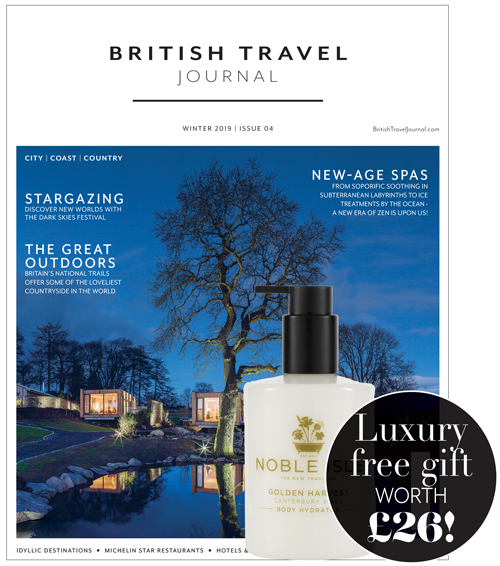 9 must visit Vegan restaurants in the UK

Staff at Hever Castle are celebrating after getting a hattrick at the Beautiful South awards. The historic attraction scooped a gold award in the Large […]