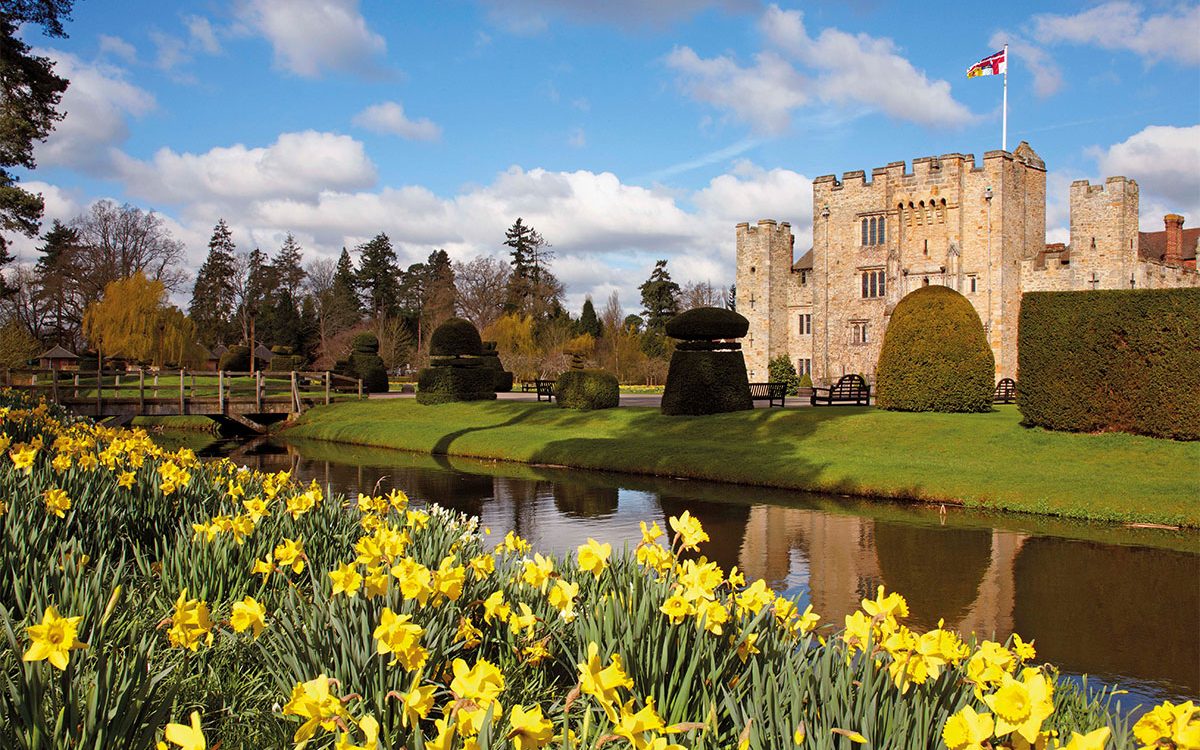 Enjoy exclusive access in the gardens where the Tudor queen grew up when you stay the night in the Tudor Village at Kent’s Hever Castle, and spend an evening in the same room where she slept with Henry VIII at Thornbury Castle in Gloucestershire.

It’s so quiet as I stroll along Anne Boleyn’s walk that I fancy I can hear the swish of her skirt skimming the grass. To my left is the fairy-tale castle where she grew up and the formal Italian garden; ahead lies the lake, with its pleasant hour-long circuit by the water. The only person I meet on my early-morning perambulations is a gardener; guests staying the night at Hever Castle get exclusive use of the grounds before they open to the public and after everyone else has gone home.

It’s a delicious feeling having all this history to yourself, imagining Anne strolling along with Henry VIII, the Tudor king she so enraptured that he broke with Rome and set up the Church of England just so he could marry her. The story might not have ended well – Anne was one of Henry’s two wives who were beheaded – but it still never fails to entrance me.

At opening time, I’m first through the door of her crenelated, moated home, where the door to the great hall with its huge fireplace, wood ceiling and minstrels’ gallery still has the lock Henry brought with him to ensure his safety. Upstairs is the long gallery where the enamoured pair may have promenaded, two of the ill-fated Queen’s prayer books, one exhorting the reader to ‘remember me when you doth pray’, and the room believed to have been slept in by the Tudor king.

I wouldn’t mind curling up in the four poster there, but visitors to Hever can’t stay in the castle. Instead, I’m just next door, in the Tudor Village (now called the Astor Wing) created for guests of its 20th-century owner William Waldorf Astor. It’s a long way from slumming it – Astor really did things properly when he ploughed some of his vast fortune into restoring Hever, landscaping its gardens and creating the lake. Insisting on only using materials and methods current in 16th-century Britain, his guest extension featured rooms with half-timbered or elaborate plastered ceilings that have welcomed everyone from Winston Churchill and Arthur Conan Doyle to Elizabeth Taylor and Grace Kelly. Even the least expensive of the 28 rooms are beautifully done out.

Henry VIII himself would have surely felt at home in the Tudor Village’s dining room with its enormous fireplace, brocade curtains, oak panelling and ribbed wood vaulted ceiling. While they don’t serve dinner here (for that you need to stroll to the Henry VIII pub through the grounds or drive further afield), the breakfasts are particularly impressive. After consuming what feels like my body weight of fresh fruit, yogurt with granola, cheese, pastries and avocado on sourdough, I feel a bit like bluff king Hal myself.

So much for eating like a king, but if you want to truly live like one you need to drive west for three hours to Thornbury Castle in Gloucestershire, the only Tudor castle that operates as a luxury hotel, and is now a member of the prestigious Relais & Châteaux group.

Here, I hit the jackpot and sleep in the very room that Anne Boleyn shared with Henry for ten days during their royal progress in 1535. Up a spiral stone staircase with steps worn deep by the imprint of footsteps over the centuries, the Henry VIII suite is magnificent, with an ornate ceiling, a four-poster bed and the original garderobe toilet (thankfully now with plumbing). When the royal couple visited, Henry was already beginning to tire of his second wife – he had her beheaded in 1536 and married Jane Seymour, who didn’t stay at Thornbury but still has a room named after her, just beneath this one in the octagonal stone tower.

Right at the top of the tower, up a dizzying 77 steps, lies the most opulent suite of all, named after Henry’s first wife, Catherine of Aragon. The enormous ten foot by six-foot bed here is surely big enough for all of Henry’s six wives beneath its canopy of 24-carat inlay, while the capacious bathroom could have held all their ladies in waiting too.

You don’t need to pay a king’s ransom to stay here though; even the least expensive of the 26 rooms have a regal feel, some with four posters or a seating area in the oriel window area. Like the rest of the castle, they are fresh from a multimillion-pound facelift after the Emirati Khamas group bought it in 2019. Under the watchful eye of English Heritage, it has been restored sympathetically, adding contemporary comfort to the Tudor trappings. Carpets have been peeled back to reveal Tudor flagstones, Victorian tiling and floorboards; furnishings were overhauled, plumbing and electricity upgraded, and discreet modern frescoes added.

You certainly get a lot of history with your hotel here. Thornbury was one of the last castles to be built before firearms rendered them obsolete, so while it has the traditional crenelated walls, turrets and arrow slits, there is a distinct palatial side to it, with 12-foot red brick chimneys and luxurious apartments.

The most lavish of all is the double-height drawing room, its elaborate oriel windows framed by crimson and gold curtains. It’s the perfect spot to enjoy pre-dinner canapes and cocktails, and although its twinkling chandeliers wouldn’t have been around in Tudor times, they certainly add to the atmosphere.

Carved into the ornate arched doorway and the enormous fireplace surrounds I can make out the Stafford knot, the emblem of Edward Stafford, the third Duke of Buckingham. It was Stafford’s pretensions to grandeur and probably the throne (he was a descendant of Edward III) that led to his downfall. Fearing for his throne, and fancying the castle for himself, Henry effectively cried “off with his head” by signing the duke’s death warrant before nabbing Thornbury. After he visited with Anne, his daughter, Mary Tudor, spent part of her childhood there.

Moving from the drawing room into the wood panelled restaurant, the arrow slit in the four-foot castle walls by my table reminds me that I’m still in a castle, albeit a palatial one. It’s a lovely place to savour the six course tasting menu, which becomes quite ceremonial with a succession of perfectly cooked dishes along with a matching flight of wines.

Daytime brings the chance to explore other Tudor castles nearby. Berkeley Castle, which also belonged to Henry, is just nine miles away. While the king and Anne probably didn’t stay here, their daughter, Elizabeth I did – and left behind her bedspread when she stormed off after a row about hunting. An hour’s drive from Thornbury takes you to Sudeley Castle, which Henry and Anne visited, but which is better known as the home and resting place of Henry’s last wife, Catherine Parr, the Queen who outlived him.

Back at Thornbury, there is falconry and archery on offer by way of regal pursuits, or afternoon tea beneath the minstrels’ gallery. Here, too, are gorgeous gardens, with ancient yew hedges, sections for roses and herbs and a particularly pretty walled garden. In Tudor times, its creeper-clad walls were topped by a timber gallery, allowing the duke to walk from his rooms to his pew in the adjacent St Mary’s church without mixing with the hoi polloi.

Now, as I walk at ground level around a flower bed carefully planted in the shape of the Stafford knot, my thoughts turn to Anne again. She too must have walked here, probably aware that she was losing the king’s favour.

Her story doesn’t end at Thornbury, but at the Tower of London, where she was taken by barge, passing through the shudder-inducing Traitors Gate. It’s no surprise that after she was executed on Tower Green and buried in the Chapel Royal of St Peter ad Vincula that people frequently report seeing her ghost there.

I prefer to think of it at Hever instead, running around in the garden, happy and smiling outside her childhood home.

Rooms at Hever Castle cost from £175, B&B, including access to the castle and grounds during the stay; hevercastle.co.uk. Thornbury Castle rooms start from £249, B&B, with the Henry VIII suite from £559; thornburycastle.co.uk

Set on an exclusive clifftop overlooking the famous sands of Fistral Beach, The Headland is, without doubt, one of the grandest and finest hotels in […]

Discover the latest hotels this summer, we tell you where to look. Hare and Hounds, Berkshire They’ve had a lot of fun playing on the […]