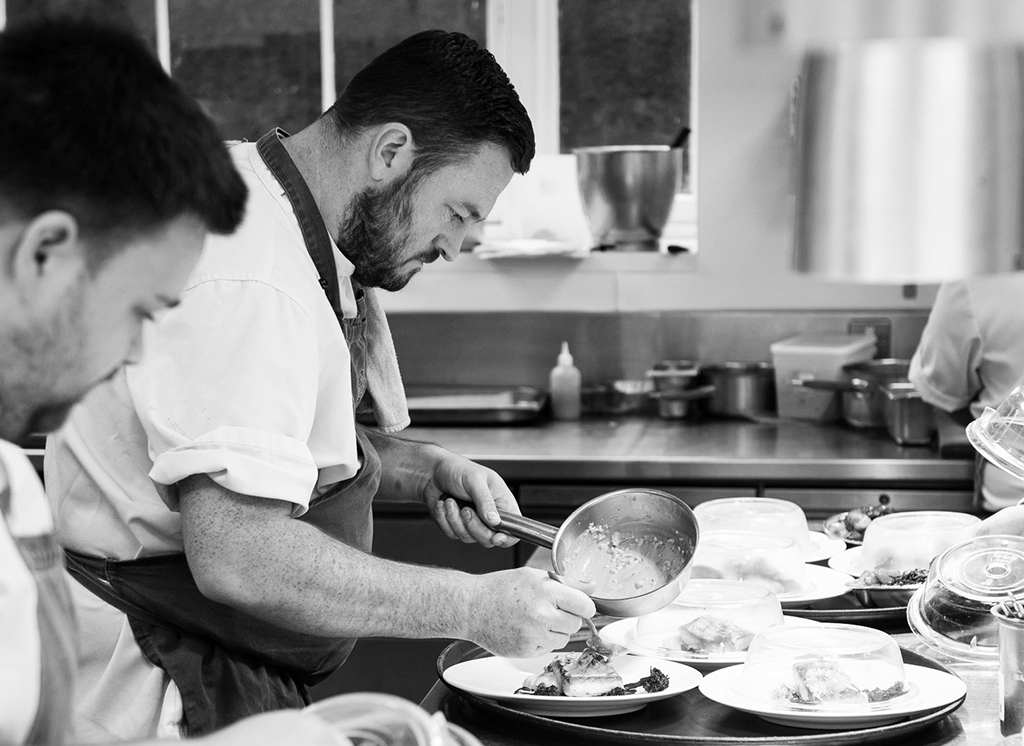 A country estate that has stood the test of time like no other. Chantal Borciani uncovers the secrets of Cliveden House and meets new executive head chef, Paul O’Neill.

Set in 376 acres of National Trust woodland, Cliveden House has one of the most colourful legacies of any British country house. The magnificent estate sets the stage for over 350 years of aristocratic dalliance, regal parties, political scandal and iconic moments in British history.

Cliveden was built in 1666 by the 2nd Duke of Buckingham, as a gift to his mistress, and since then has been home to three countesses, a Prince of Wales, two dukes, and the Viscounts Astor. Its roll-call of guests is just as illustrious; Queen Victoria is noted as a frequent guest during her reign, writer and playwright George Bernard Shaw visited, as did Winston Churchill, Henry Ford, Teddy Roosevelt, Mahatma Gandhi, and the Beatles – who filmed part of their movie Help! at Cliveden.

Today, the elegant hotel is still favoured among the elite – the Duchess of Sussex famously spent the night before her wedding at the five-star luxury hotel – as did many of the star-studded guests of the Royal Wedding.

At the turn of the year, Paul O’Neill took on the role of executive chef at Cliveden – a big task considering the calibre of guests rolling up the immaculate drive, but the revered chef is no stranger to the pinnacles of power. Paul started his career at Claridges, worked at Ashdown Park, won the Roux scholarship in 2003, and worked under Andre Garrett at Cliveden before taking over the helm.

He says it’s impossible not to be inspired by the setting where he works. “When guests walk up that driveway it’s an experience in itself and the food should reflect that sense of occasion. This place has such an amazing history.”

The building itself most certainly reflects some fine British pedigree. The Grade 1 listed Italianate mansion that stands today was built in 1851 by the architect Charles Barry following two catastrophic fires that destroyed the original mansion and its replacement in 1795 and 1849. Charles Barry designed The Palace of Westminster and the Houses of Parliament and Cliveden is still considered to be one of his architectural masterpieces.

Amid such grandeur, it would be easy to rest on your laurels but Paul’s attention to detail and culinary prowess has long-since been celebrated by the industry.

“I like to strip things back to great ingredients, we work seasonally and let the produce sing.”

The hotel welcomes guests for afternoon tea, à la carte and seven-course tasting menus at the Cliveden Dining Room, relaxed dining at The Astor Grill and private dining in several opulent banquet rooms – should you wish to follow in the footsteps of Chaplin, Churchill, Lennon and Lawrence.

“I want everyone who walks through the door to be wowed by whatever they eat, whether they’re coming for afternoon tea, a sandwich or a seven-course tasting menu,” explains Paul.

Seasonality is key, he continues. “Spring is fantastic because it’s the start of all the great produce such as the new season asparagus and wild garlic but also I like autumn with the fabulous root vegetables and British ingredients.”

Life has come full circle for the chef, who visited Cliveden during his Roux Scholarship with legendary gourmand Albert Roux.

“A week before the final of the Roux Scholarship we came here with Albert because this was his one of his first jobs when he came to England. Funnily enough, he used to polish silver in what is now my office.”

Set up by brothers Michel and Albert Roux, and now run by their sons Alain Roux and Michel Roux Jr, the Roux Scholarship is the premier competition for up and coming chefs in the UK.

“I wouldn’t be here today without it,” says Paul. “It was a once in a lifetime experience. Only last week Alain just phoned me up to see how things are going, it’s really nice to have that family mentality and for them to be there to help you through anything you need.”

Alongside Cliveden’s exquisite dining, guests staying overnight will experience the full stately home hospitality. There are 48 flawless bedrooms and suites, including the famous Spring Cottage, which played a part in the Profumo affair that rocked British politics in the 1960s. In July 1961, Christine Keeler was staying at Spring Cottage and met John Profumo, Secretary of State for War, at a party by Cliveden’s outdoor swimming pool. This meeting and their subsequent affair brought down the Conservative Government in 1963.

We stayed in the Mansion House, in the sensational newly refurbished Deluxe Suites, furnished in a beautifully traditional, classic style. Luxurious and generously proportioned, the suites feature high ceilings and are decorated with antiques and original works of art with a very spacious lounge area, with open fireplace. Sunlight flooded in through the double set of sash windows, offering spectacular open views of the estate.

Complete with complimentary access to the Butler’s Pantry (honesty bar), you can enjoy a drink out on the large private terrace (with a table and chairs for six) and simply relax and unwind in what feels like the grandest of settings. Each of the guestrooms and suites (all named after characters in its history) have been refurbished to the highest standard, some with private hot tubs, separate dressing rooms, and there are even some suites designed to accommodate small dogs.

The glorious gardens and woodlands, including the grand ‘Fountain of Love’ and romantic ‘Water Garden’, are today maintained and owned by the National Trust, open for hotel guests to enjoy at leisure, and for day visitors to explore for a small entry charge. For those who wish to follow the footsteps of dukes, earls and royalty inside the Mansion House, there are also guided tours of the hotel, held on Monday, Tuesday and Thursday afternoons, March-October.

Hidden behind the brick walls of the garden and enveloped in tumbling scented roses and lavender, you will discover a tranquil oasis, offering a real sense of well-being and relaxation – in Cliveden’s magnificent spa.

There are seven treatment rooms, offering quintessentially British treatments, such as the Signature Oskia Glow 75 minute Facial, an exercise studio, state-of-the-art gym, sublime indoor pool with Jacuzzi and in the centre of it all, the infamous ‘Profumo’ pool – which is incredibly the last remaining listed outdoor pool in England. Time spent here is certainly not time wasted, and if it had not been for our dinner reservation, I’m not sure we would have left the outdoor hot tubs before the evening drew in.

The impressive Great Hall, complete with antique suits of armour and a vast, and ornately-carved, 16th-century fireplace, is the ‘reception’ room for incoming guests – and also the perfect setting for an afternoon tea. The bar has found its home in the Library, facing south and overlooking the immaculately maintained 4-acre parterre. As you would expect, next to the bar is the Dining Room, exquisitely appointed and sharing the view across the 17th century terrace and down to the Thames valley, quite breathtaking on its own but absolutely brilliant when, as happens on most evenings, the resident red kites swoop and wheel, majestically, over the parterre.

From every corner of the stately home, there are mesmeric views of the countryside, woodland, wildflowers or riverbeds and along each hallway room monikers give a hint of bygone days and historic moments; Gladstone, Kipling, Garibaldi, Asquith and so on.

Yet there is only one place executive chef Paul wants to be, and that’s at the heart of Cliveden, in the kitchen with his brigade of 26 staff. “It’s my domain and it’s what I love,” he concludes.