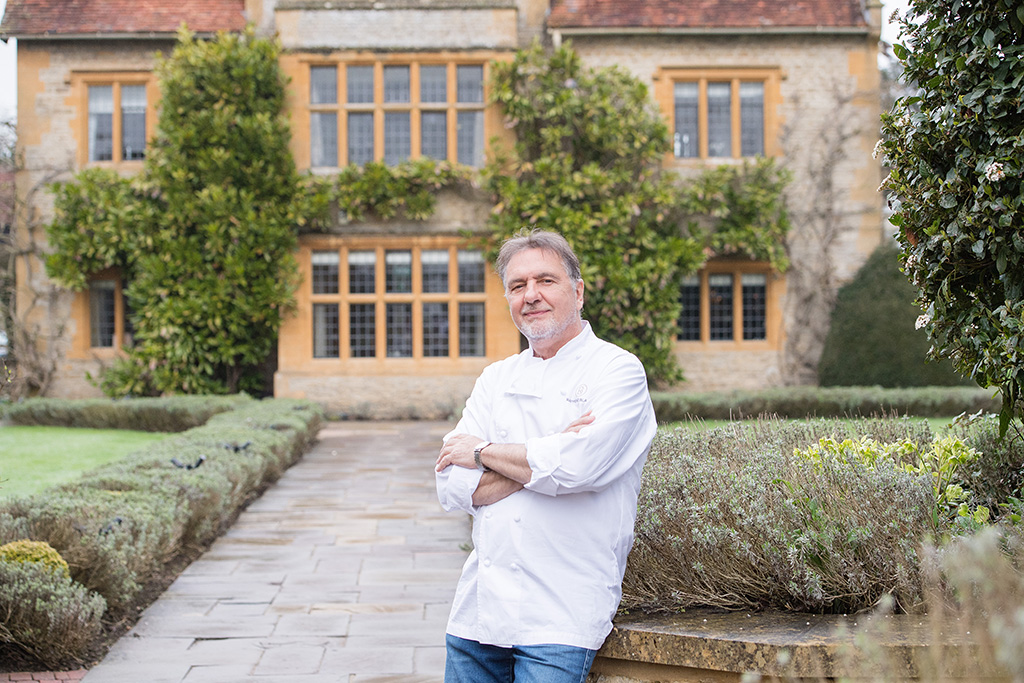 Interview with Raymond Blanc in a special year

Top chef Raymond Blanc celebrates two milestones this year – his 70th birthday and the 35th anniversary of his hotel-restaurant, Belmond Le Manoir aux Quat’Saisons. The perfect interviewee tells Max Wooldridge how the UK food scene has changed and who remains his greatest influence.

Gosh, if only every interview was as delightful as an hour in the company of the renowned chef Raymond Blanc.

I’ve chatted with a number of celebrities over the years, mostly about where they’ve travelled to, and what inspires them. Not every meeting has been an enjoyable experience.

There was one celebrity who couldn’t remember the country he’d been to on a free holiday; another couldn’t properly pronounce the key destinations in the region she was being paid handsomely to promote.

And too often than not there’s an overzealous PR close by to steer their client towards the key points that need to be hammered home. At times, you’re even left to decipher monosyllabic grunts and somehow transform them into a sentence or two.

An interview with Raymond Blanc is a different encounter entirely. He’s cheerful, garrulous with a ready smile and makes the writer’s job very easy indeed. All the reporter has to do is turn up and remember to switch on their recording device.

But best of all, perhaps, is the famous chef’s joie de vivre and passion for food and life. His attitude soon rubs off and you walk away from the meeting feeling another two feet tall. For a long time afterwards you apply his inspiration to what makes you tick.

I simply need not have bothered with the long list of carefully thought-out questions prepared in advance.

Blanc talks continuously and passionately in a thick, melodic French accent, which is regularly punctuated with his trademark “ooh la la”.  And as he talks, you tick off the questions one-by-one until suddenly there’s none left.

In fact, Blanc answers my first question before we’ve even sat down.

He says he has certainly seen the food scene in this country improve drastically since he arrived in the UK in the early 1970s.

“Back then the British food scene was very different, totally unrecognisable with nowadays,” he recalls.

“The UK was simply not a nation of food-lovers.  Sure good food was available but it

was class-led and exclusive. The country was a culinary wasteland with lots of intensive farming.

“But now it’s so different and there’s a real celebration of proper, authentic food.”

The change, he believes, is not due to the rise of master chefs and successful TV cooking shows but humble everyday British folk.

“The revolution in food in this country has largely been down to British consumers themselves. People are so much more food-aware and curious nowadays. They want to know what’s in their food and realise the extent to which food connects with everything, with every part of our lives.”

Blanc turns 70-years-old in November, in the same year as his famous Oxfordshire hotel-restaurant, Belmond Le Manoir aux Quat’Saisons, celebrates its 35th anniversary.  The hotel and its renowned two Michelin-starred restaurant are now part of the Belmond luxury hotel group.

He bought the 15th century manor back in the early 1980s when he had his restaurant Les Quat’Saisons in Summertown, Oxford.

As soon as he saw the property for sale (in Country Life magazine) Blanc immediat-ely drove to see it in his old Vauxhall car. When the owner opened the door he told them he wanted to buy their manor. He launched Le Manoir aux Quat’Sa-isons as a hotel in 1984.

Despite his numerous culinary triumphs and accolades, Raymond Blanc thinks of himself as a simple man at heart.

“I’m still just a humble chef and gardener, a country boy from a small French village.”

That village is Saône, near Besançon, in the rural Franche-Comté region that borders Switzerland.

Blanc says how his gastronomic career in the UK started almost by chance when he arrived from the Jura mountains in the summer of 1972.

“In a way, looking back, I guess I was exiled to England,” he recalls with a grin.

“The chef at the restaurant I was working at in France did not like it when I criticised his sauce. He first broke my jaw with a copper saucepan, and I was then sacked by the boss!

“But unlike Napoleon,” Blanc jokes, “who had the idea of conquering, I arrived in England with a lot more humility. I was full of lots of ideas and aspiration.”

Nowadays Blanc feels at home in the UK, and he certainly seems to like Britain, and the British people.

“I am very happy in Britain, and on a daily basis it feels like home for me.  And you British have taught me a lot about life!”

Blanc says the British pragmatic approach to life has served him well. It has opened his eyes and improved him greatly as a person as well as broadening his mind.

“Perhaps the best thing I’ve learned from the British is a sense of fairness. And I’ve learned the ability to laugh at myself. This is often the greatest hurdle for any Frenchman!

“Oh yes, and I’ve also learned to queue, too. In fact, I get really upset now when I see people jumping the queue!”

Then he reveals the person who has inspired him the most in his life.

“At the risk of sounding like a Mummy’s Boy, my mother is unquestionably still my greatest inspiration. She gave me such a fundamental grounding and taught me that food is an act of love. You bring your family together, and you create a feast or banquet.

“She showed me that the dining table is the centre of the house, not the living room. It’s where you share things, where you joke, you argue, you get to know each other, and the dinner table is the most natural place to do so.

“But sadly, I really feel we are losing this ability to engage with each other these days. I’m lucky that I have the same energy as my mother, and I always try to pass on her wisdom to others.”

Once again, before I can ask him, he tells me how a top chef keeps in shape.

“Let’s just say I have a good metabolism!” he says, laughing.

“No, actually, if you work in a hot kitchen for half the day or more, believe me, the heat means you’re going to burn off a lot of calories, maybe as many as 3,000 calories, more even. It’s not quite like riding a stage of the Tour de France but not far off.”

Despite being an honorary Brit, Blanc returns to his native France regularly, especially Paris. He reconnects with friends and meets with his culinary contemporaries he greatly admires, like the renowned chef Pierre Gagnaire.

“Pierre is one of the best chefs in Europe. His Paris restaurant has three Michelin stars.

I love his approach and sensitivity to food.

“I’ll usually visit Paris for a day or two at a time. I’m not an expert on the place. I just know a lot of chefs and gardeners!

“Each time I visit Paris I discover somewhere wonderful – a great new cafe, or a small bistro with a lot of character.

“But the best thing about Paris is the wonderful fresh food markets. They are some of the best in the world. They are all about proud people selling fresh, local produce.”

He singles out one market, in particular: the Marché President Wilson in the 16th arrondissement on the Avenue du Président Wilson (between Rue Debrousse and Place d’Iéna, also known as the Pont de l’Alma market.

“Markets like this are so much more than just a place to buy food. It’s a wonderful snapshot of Parisian daily life, a lively gathering of vendors and regulars catching up with each other.”

Somehow he has sensed that I have a trip to Paris in the near future. Blanc reels off his recommendations for places to eat in the city of light.

Then he’s back to extolling the virtues of Parisien food markets, and the Marché des Enfants Rouges (in the Marais district, in the 3rd arrondissement).

“It’s the oldest food market in Paris. It is so-named because it used to be an orphanage where the children dressed in red.”

There’s a rare but brief pause in the conversation before he dishes out the advice he would give to any young chefs starting out.

“Equally, talent alone will never be enough to carry you where you want to go, so you have to work really hard, too. Build up your will power and inner strength, so when you’re down you can pick yourself up. It also helps if you love people. If I ever stop loving people then I will stop doing what I’m doing.

“And it’s important to remember that a well-run kitchen is a quiet and harmonious kitchen. Being a chef is not about humiliating other people like we see on our TV screens. In a kitchen no-one ever needs to shout.”