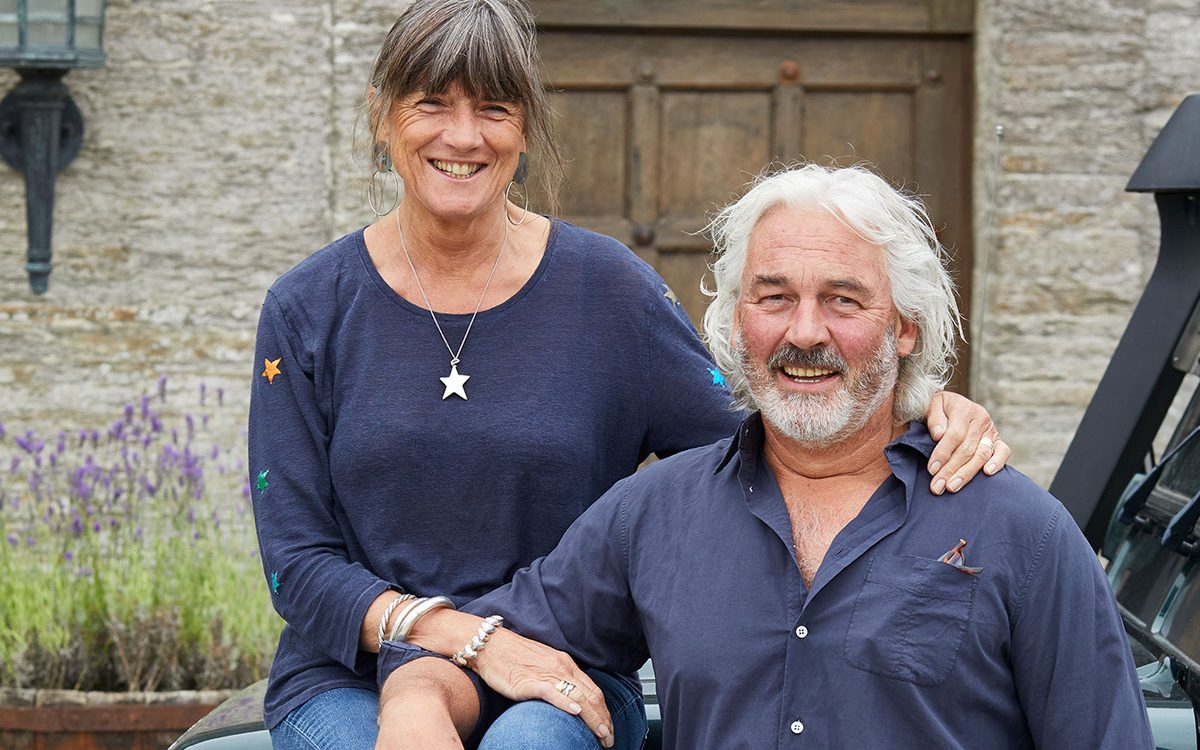 They say that from little acorns great oaks grow, but in the case of Robin Hutson, the starting point was in fact a few weeds and a couple of carrots.

After selling his hugely successful hotel chain Hotel du Vin in 2004, Robin was ready to kick back and relax, but a chance encounter in the New Forest quickly changed all that.

“I was planning to put my feet up!” he laughs. “Then I got a call from Jim Ratcliffe who asked me to help him get Lime Wood (a five-star hotel in the New Forest) open. I was looking at other bits of property that the hotel owned; tidying things up, closing and selling, and there was this little hotel in Brockenhurst called Whitley Ridge…” he recalls. “I went there to have it valued for sale, but when I walked into the kitchen garden I had a lightbulb moment, I suppose. This small but perfectly formed garden had two carrots and a few weeds growing in it, and I just suddenly thought, I wonder if there’s a way of bringing the kitchen garden right to the fore of everything?”

And with that seed firmly sown, great hotels began to grow. Robin and his wife Judy transformed Whitley Ridge and in 2011 it reopened as THE PIG. Since then, the litter has expanded considerably, and there are now a further seven PIG hotels spread across every county along the south coast of England. Today, Robin, who earlier in 2022 was awarded an OBE for services to the hospitality industry and philanthropy, is one of the most influential hoteliers in the country. He is deeply admired by his peers and, most importantly, well-liked, and it’s easy to see why; when we speak, he is full of warmth, sincerity and has a palpable sense of fun, much like his hotels.

“Coming from a background of five-star properties, I was aware that the country-house sector was peddling an out-of-date concept, really. It was all rather formal and stuffy – punters were scared to go up the drive,” he explains.

“Not being too grand was central to what we wanted to do. That’s really where the name THE PIG comes from. I wanted it to have an agricultural connotation because of the garden, but I also thought – it sounds a bit like a pub, people aren’t scared of going to pubs. It was never going to be ‘the something-something grand manor hotel’, or anything that sounds too posh.”

Having weathered the recent pandemic storm, Robin’s unique porcine properties have been at the forefront of the UK hotel scene for over a decade now. Widely celebrated for their laid-back ethos and distinctive sense of organic style, THE PIG offers guests a luxurious, yet unpretentious stay immersed in the bucolic British countryside, with plenty of delicious sustenance on offer. This same recipe for success (and the perfect weekend break) has now been applied to PIGs in Somerset, Southampton, Dorset, Devon, Kent, Cornwall and Sussex, but despite this impressive expansion, much of what was first sown in the New Forest way back when remains part of the glorious experience today; the walled garden, the Potting Shed treatment rooms, roaring open fires, upcycled furniture, resident animals and the hotel’s highly acclaimed 25-mile menus, which use ingredients sourced from within a 25- mile radius alongside fresh, seasonal produce harvested from the kitchen garden.

“We let the garden inform everything that we do, from the menu to the design and decor and so on. I want it to feel very natural, comfortable, friendly, not too designed, and somewhere you can put your feet up on the table if you want to and have fun,” Robin enthuses.

Ingeniously, while retaining the unique formula of the first, each PIG also has its own distinct sense of identity. They share the same handwriting, but each one has its own unique signature. Because of this, most regular guests are known to have a favourite, from THE PIG-on the Beach, which overlooks the golden sands of Dorset’s sweeping Studland Bay, to THE PIG-at Harlyn Bay in Cornwall, with its abundance of original features and indulgent outdoor dining hotspot, The Lobster Shed. I love THE PIG-at Coombe; a secluded, Grade-I-listed Elizabethan manor, nestled in Devon’s green and pleasant Otter Valley. Its bedrooms are characteristically PIG, with rich and cosy fabrics, reclaimed textures and wood, rolltop baths, locally stocked ‘larders’ and each one totally unique. There are also three bountiful walled gardens, one home to an old stone folly, now a scenic spot designed for ‘quaffing and troughing’, as is positively encouraged.

“I always say that the hotels are like kids and that you can’t have a favourite, but there are certain ones that have particular significance. Brockenhurst was the first, so that makes it very special, and the last one you do is fresh in your mind, as you live it night and day for so long,” Robin explains.

“But Bridge Place (in Kent) is very special – Judy, my wife, lived in the village of Bridge throughout her teenage years, so we knew that beautiful building very well.”

Today, each hotel is undeniably shaped by the historic property that it inhabits. These grand old buildings are carefully hand-picked by Robin and Judy, who is also responsible for the group’s celebrated interior design.

“We look at loads of properties all the time, and I get a gut feeling. Sometimes I don’t even get out of the car,” Robin laughs.

“There are common elements to all the hotels – the restaurants follow a theme, but we allow the buildings themselves to dictate how we lay the rest out. We don’t fight the building; we allow it to give us the clues as to what we should do,” he explains.

“And our design philosophy is very personal – Judy and I just choose stuff that we like. Our dining room table at home is always full of swatches and things, every surface is covered. It drives me nuts sometimes!”

The couple’s latest transformation is THE PIG-in the South Downs, a beautiful old dower house tucked away near the ancient market town of Arundel in Sussex. Much to Robin’s delight, it is home to THE PIG’s very first vineyard.

“It’s my train set,” he says, grinning from ear to ear.

“Wine is a bit of a passion of mine, I am quite partial to the odd glass. So, it’s very exciting. All the team are involved in the pruning and picking, and we’ve all adopted a row.”

With Robin’s eyes firmly on the vines, it is son Ollie who oversees THE PIG’s all important kitchen gardens and has done ever since their conception. Robin’s other son, tattoo artist Will, has also recently made his distinctive mark by creating striking treasure map-esque illustrations that feature in the hotel group’s brand-new book, THE PIG: 500 Miles of Food, Friends and Local Legends.

Released in May 2022, this lively and energetic coffee-table compendium celebrates the several counties that THE PIGs now call home, shining a spotlight on the unique produce and flavours associated with each one and the cast of characters that all play their part, from scallop divers and surfers to farmers and foragers.

As well as mouth-watering recipes and some handy gardening tips, the book also provides a potted history of each remarkable building, and some truly riveting and often heart-warming stories and anecdotes of how Robin and Judy are connected to each one, making THE PIG feel even more personal than ever.

“We’ve opened three new hotels since the last book (THE PIG: Tales and Recipes from the Kitchen Garden and Beyond), and I felt it was time for an update. I was proud of the first book, and I like it a lot, but I felt it was safe. It was a bit ‘John Constable’ for me. A bit sweet! I felt that there was more of a story to tell.” Indeed, there is. And how about the next chapter? Before we part ways I ask if there are plans afoot for further additions to the much-loved piggy litter? “Yep,” says Robin, smiling. “And there could be more vineyards too…”