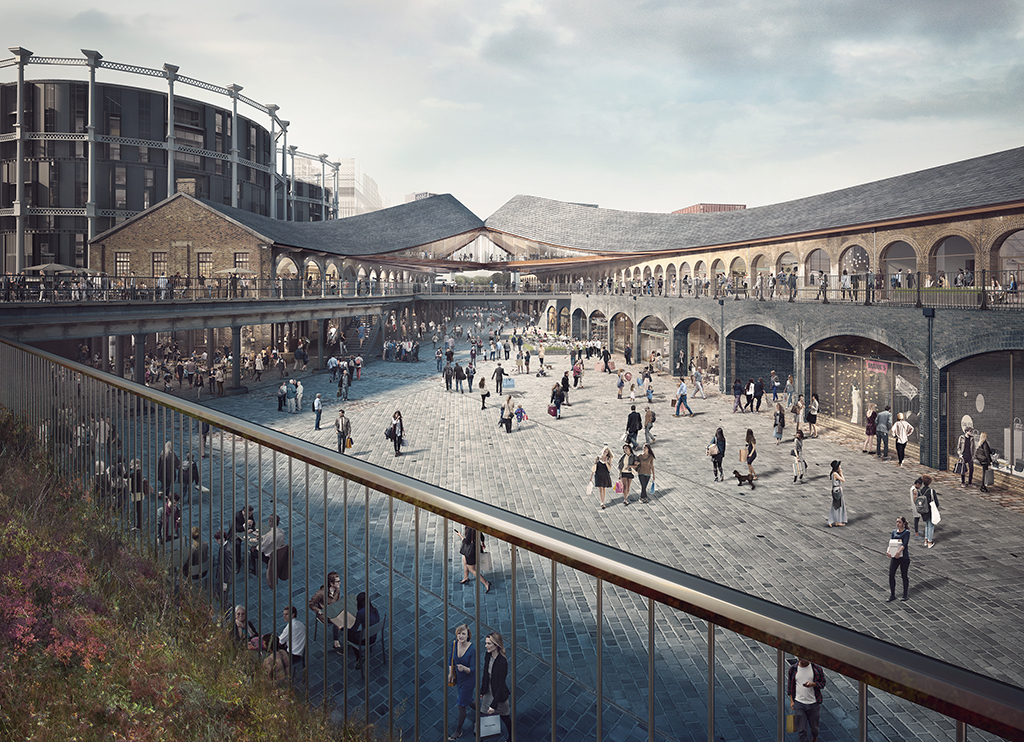 London’s hippest new area is buzzing with shops and restaurants – it’s the perfect urban base for a city break with attitude.

The location of the King’s Cross – in the heart of London, and easily accessible from almost anywhere, makes it surprising that it was ever an unloved patch of the capital. But just a few years ago it was nothing more than a grimy transport hub, with a few derelict warehouses thrown in for good measure. However, the neglect that the area suffered has turned out to be its saving grace.

From the neo-gothic exuberance of St Pancras, to the urban majesty of the repurposed gas holders that line Regent’s Canal, via the sleek brutalism of the former Town Hall extension, now The Standard hotel, you could come to King’s Cross just for the architecture – but it offers so much more.

If the area had been developed hotchpotch over the years, many of its architectural gems might have been lost when they were out of fashion – as St Pancras, famously saved by John Betjeman in the 1960s, nearly was. As it is, the buildings have been largely preserved – and over the past decade King’s Cross has undergone a transformation that has been social as well as architectural. World class hotels nestle side by side with quirky gems, like a floating bookshop in a 1920s Dutch barge, and a peripatetic café cooking up food grown on site.

Next door to Granary Square, Coal Drops Yard is a great place to sample the best of London shopping – with stores from iconic British designers like Paul Smith and Margaret Howell, as well as relative newcomers such as Blackhorse Lane Ateliers, selling London-made denim clothing, and independent British spectacles brand, Cubitts. ►coaldropsyard.com

St Pancras Station is more than just a railway terminus, it’s also home to numerous stores – Cath Kidston, Hamleys, Fortnum and Mason, and Aspinal – to name a few. For a more off-beat shopping experience, visit Word on the Water – a floating bookshop on the canal by Granary Square.

Although it’s easy to reach any of London’s multiple attractions from King’s Cross, there’s plenty to do without leaving the area.

Take a walk along Regent’s Canal, and you can enjoy a tranquil view of this slice of London – the gas holders at dusk are a particular joy. The canal will also take you to Granary Square, home of Central St Martin’s art college, spectacular fountains, and regular events and outdoor art installations.

Also in Granary Square is the House of Illustration. Founded by Quentin Blake, this is the only public gallery in Britain dedicated solely to illustration and graphic art.►houseofillustration.org.uk

King’s Cross station itself is worth a visit – both for the original building designed by Lewis Cubitt, and the spectacular 2012 extension. Not to mention the Harry Potter connection – while you’re there, don’t forget to have yourself photographed flying into platform 9¾.

Swap your soft drink for a nice glass of red wine and a slice of freshly made pizza served to your seat while you watch the latest movie or one of the classics at Everyman Cinema in Handyside Street.
►everymancinema.com

Just the other side of St Pancras is the British Library. You’ll need a reader pass to visit the famous reading rooms, but there are also numerous exhibitions inspired by the library’s collections, all open to the general public, and many of them free.► bl.uk

A short stroll down Euston Road will take you to the Wellcome Collection, a free museum and library which hosts inventive exhibitions exploring the connections between science, medicine, life and art. ►wellcomecollection.org

And if you do manage to exhaust everything King’s Cross has to offer, a pleasant amble through Bloomsbury will take you to the British Museum – or after a few minutes on the canal towpath you can find yourself in Camden Town or Islington.

With the regeneration of the area, numerous great restaurants have sprung up, and King’s Cross is positively bristling with places to eat good food, and watch the world go by.

At Caravan, an eclectic global menu is cooked up in an old grain store, very much in keeping with the whole area’s industrial chic. ►caravanrestaurants.co.uk

Indian with a difference – Dishoom offers a scrumptious Iranian-Indian menu in a restaurant with décor inspired by 1920s Bombay. ►dishoom.com

For an ultra-glamorous and sophisticated martini lounge head to Anthracite in the Great Northern Hotel.►anthracitelounge.com

The Skip Garden Kitchen serves vegetarian food from around the world, using local, seasonal and organic ingredients – some of them grown on site. It moves around King’s Cross as different spaces become available, so check out its latest location online. ►globalgeneration.org.uk

The only European outpost of this ultra hip US hotel chain is housed in a mid century brutalist monument, once home to the local council. The building, which opened as hotel in July 2019, has been lovingly refurbished, with pleasing, playful touches. Furniture is upholstered in custom-woven Harris tweed and the reception area has a ceramic installation by London-based artist Lubna Chowdhary. Carpets echo London Underground moquette, and the hotel lounge houses an eccentrically-curated library – a nod to the fact that the ground floor of the building was once home to the local municipal library (this has now been moved to the council’s new offices just across the road). If you’re looking for idiosyncratic luxury, with a mid-century James Bond vibe, The Standard is your place. ►standardhotels.com/london

Facing The Standard across Euston Road, the Renaissance is a different experience altogether. A fairytale in red brick, designed by gothic revivalist George Gilbert Scott, it’s stage-set Victorian London (and, in fact, several films have been shot here, including Harry Potter and the Deathly Hallows). Ceilings are vertiginously high, and rooms are packed with period features. Perfect for train spotters and Potter fans alike – some of the rooms actually overlook the interior of St Pancras Station. ►stpancraslondon.com

If you’re already in London it’s almost impossible not to pass through King’s Cross at some point, as the tube network converges here. Trains from all over Britain also arrive at King’s Cross and St Pancras stations, as well as nearby Euston. St Pancras is the home of the Eurostar terminal, with trains direct from Paris, Brussels, Amsterdam and beyond. Tube or rail links will also bring you direct to the area from most of the capital’s airports.