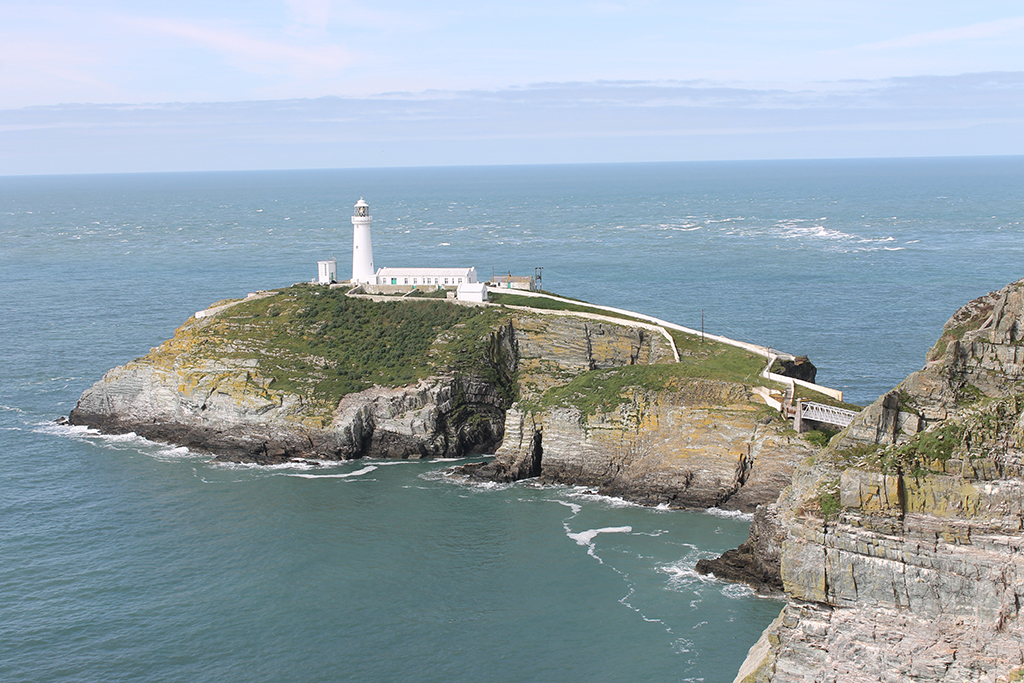 Have you ever dreamed of travelling the British coastline but not known where to begin? Sarah Kerr, author of The British Lighthouse Trail, shows us how to do so – one lighthouse at a time.

Almost 35 kilometres out to sea off St David’s Head is the 41-metre lighthouse known as The Smalls. Introduced in 1861 and designed by Trinity House architect James Walker, this remote wave-washed tower is not the easiest to visit. Getting a closer look is possible though using boat operators in the area who do run occasional, and very weather-dependent, trips. It is well worth the effort and just one of a number of offshore lighthouses dotted around our coastline.

Isle of Man, Point of Ayre

The Isle of Man attracts many visitors at certain times of the year, but few recognise its value as a location for spotting some fantastic lighthouses. While Point of Ayre at the northern tip lacks the dramatic scenery of many of the bigger lighthouses on the island, it has two, very different towers to take in. The 30-metre tower with its distinctive red bands was the creation of Robert Stevenson – the first of the famous “Lighthouse Stevensons” dynasty – and was first lit in 1819. Closer to the shore, on the shingle beach, can be found a lighthouse known as The Winkie. This tower, which is considerably smaller than its older counterpart, was introduced 70 years later and shone until 2010 when the light was discontinued.

Surely one of Anglesey’s most popular day trips has to be South Stack lighthouse. Housing a Visitor Centre with guided tours of the tower, the lighthouse is located on a small island linked by a bridge. The views from the top of the 28-metre 1809 tower are panoramic to say the least. Reaching the lighthouse is no mean feat though as there are 400 steps weaving down the cliff, which make for a rather strenuous return journey.

The island of Muckle Flugga off the northern tip of Unst in Shetland, is home to the most northerly lighthouse in Britain. In fact, the island itself is only beaten by its neighbour Out Stack as the most northerly piece of land in the British Isles. Visible only from Saxa Vord or from the Hermaness headland, Muckle Flugga is not an island you would want to attempt to build on, and yet that is exactly what the Northern Lighthouse Board did in 1854. The 20-metre tower that stands today, designed by David and Thomas Stevenson, was built in 1857, to replace the original tower.

We are reading The England Coast Path >>>>

Another David and Thomas Stevenson design is the 19-metre Ornsay lighthouse, which sits on the small island of Eilean Sionnach off the east coast of Skye. Accessible on foot only at low tide via Ornsay island, the views from this tower are outstanding at any time of year. With the stunning mountains on the Knoydart peninsula as the backdrop, there is a lot to love about this place. It is also possible to stay in the old lighthouse keeper’s cottage here if superb views and being cut off from civilisation when the tide comes in appeal to you.

Perched high on the cliffs at Bull Point, the most westerly tip of Rathlin Island, off the Northern Irish coast, is Rathlin West lighthouse. This incredible feat of engineering stands out not only for the awe-inspiring views that surround it, but also for being the only “upside down” lighthouse in the British Isles. Open to the public during the summer months as an RSPB Seabird Centre, this 18-metre tower designed by Charles William Scott is entered from the top of the tower. One must then descend the 98 steps down to see the lantern with its red tinted light at the very bottom. A real treat to visit and filled with lighthouse-related displays too.

There is something special about lighthouses that are only accessible at low tide and Corbiere lighthouse off the west coast of Jersey is certainly that. Designed by Sir John Coode and first lit in 1874, Corbiere lighthouse itself stands at 19 metres tall, but its prominence on top of the highest section of rock gives it a much more elevated position. It’s a popular spot to visit so be warned that you will be lucky to capture any people-free photographs from your visit.

The island of Lundy offers far more in lighthouse terms than you would expect. The island tells the common story of an old lighthouse – in this case the old 29-metre 1820 tower – built in a prominent position only for it to be discovered that it was so often shrouded in fog. In Lundy’s case this resulted in two more towers being built at the most northerly and southerly points in 1897. The island has a lot to offer both day-trippers and those on a short break, with passenger ferries operating from Ilfracombe and Bideford.

The 27-metre tall lighthouse at Flamborough Head stands majestically over some astounding coastal geology. With its chalk coves, arch and stack, it’s the perfect place to while away a few hours. The lighthouse, designed by Trinity House architect Samuel Wyatt, was first lit in 1806 and now houses a Visitor Centre with the opportunity to join a guided tour up the tower, giving you an elevated view of the glorious landscape below. Be sure to look out for the old chalk lighthouse on the approach road. Built in 1669, this tower is one of the oldest lighthouses in Britain.

The British Lighthouse Trail, a regional guide by Sarah Kerr.
Priced £18.99. The only book of its kind to provide a comprehensive listing of all lighthouses in Scotland, England, Wales, Northern Ireland, the Isle of Man and Channel Islands
► Buy here

For a unique holiday experience, look no further than a voyage aboard the Trinity House flagship THV Patricia. The Trinity House flagship THV Patricia carries passengers as she completes her vital work around the coasts of England, Wales and the Channel Islands. This popular experience allows guests to view her statutory duties maintaining navigational buoys and lightvessels, attending and refuelling offshore lighthouses and on occasion dealing with emergencies at sea.