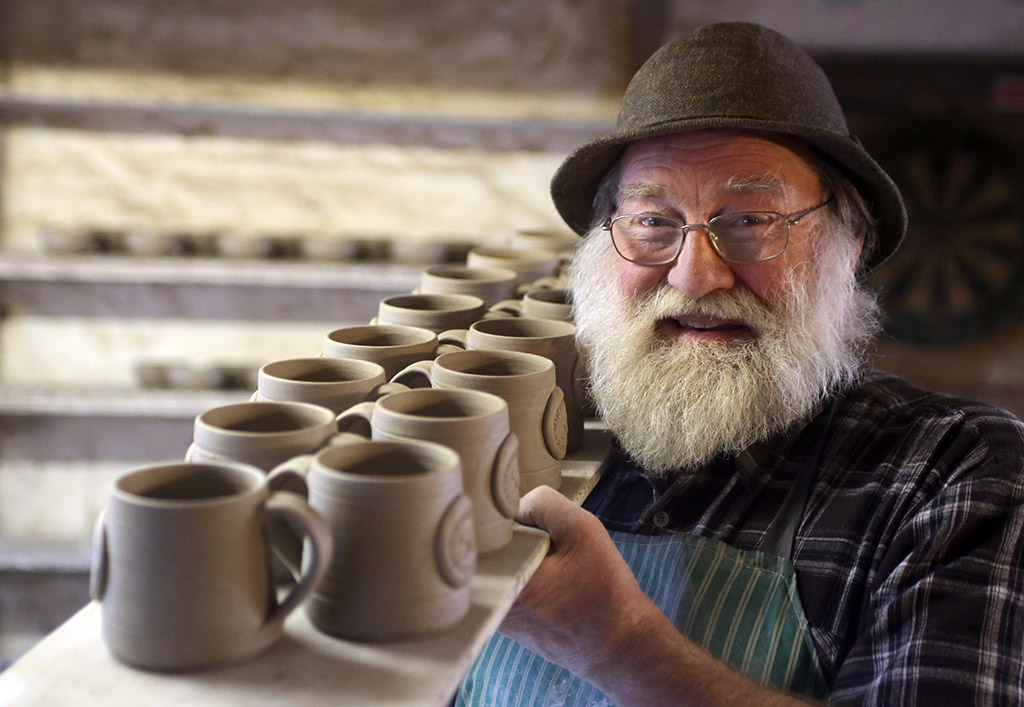 Nestled amongst the water-flanked lanes and thatched-roofs of the Somerset Levels, is the village of Muchelney, home to the John Leach Pottery. This tranquil place, with its ancient abbey and 15th century church, has a rich heritage and a wealth of beautiful houses and quaint cottages, surrounded on all sides by the expansive green fields and watery stretches of the Levels – but it is the peace of the village which master potter John Leach loves most.  “It’s a silence you can almost hear,” he says.

Muchelney has been home to John Leach Pottery since 1965, when John and his wife Lizzie decided to turn John’s family background in pottery into a business.

Both John’s father and grandfather (renowned potter Bernard Leach) were potters, and John was raised on the tradition of high-quality hand-thrown ceramics, made with love and care in a small family pottery.

The pottery produces a series of kitchen pots and serving dishes, as well as cups, jugs, plates and storage jars. Made using local clays, the honey-coloured pieces are wood-fired in a three-chambered kiln to 1320°C, giving them a distinctive ‘toasted’ finish. “The flames in the kiln impinge on the pot’s surface marking it uniquely and unpredictably,” explains John.

Leach’s aesthetic is for tactile, robust pieces, with an earthy, simplistic feel and a rawness to them that connects to both the landscape around and the heritage which inspired them. The creation of the pots is based on using natural substances, and knowing how they can be worked to create items of beauty and functionality. “My pieces are all about understanding line and form – a tactile feast for the eyes as well as the hand,” explains John.

Leach pots are not decorated or painted during the process of making them, as John and his team feel that the natural marks from firing create a unique design that speaks directly to the process of their creation. “Our pots are mainly ‘decorated’ or scorched by the long snaking flames in the kiln, each pot is always unique with its own special qualities,” says John.

The present three-chambered kiln was designed by John Leach following a traditional Japanese climbing kiln and was built by the pottery team in 1998. It takes about 37 hours to fire the kiln at Muchelney, while three extra helpers take shifts to stoke the kiln with off-cut wood and monitor the temperature. The pottery does around six firings a year and occasionally has public kiln openings.

Working with John are two potters, both of whom have been with John for decades. Nick Rees began potting in 1972 at the pottery in Muchelney and has been with John Leach ever since. Now his daughter Rachel also works there, alongside John’s son, Benedict. Mark Melbourne completes the team, having also trained at John Leach pottery before working in West Africa as a VSO volunteer, building kilns, training and making pots. It’s clear that building this team has been as important for John as building the pottery or the kiln itself. “Our pots are made by happy people who care, fashioned by hand on the potter’s wheel,” he says.

John’s range of stoneware pots has now been in constant production for over 50 years, but, he says, his great joy is in creating one-off designs. Some are fired in sawdust-filled saggars, producing exciting black pots with unpredictable white markings – his ‘Black Mood’ pots – while others explore his fascination with antique leather bottles, African and early English and American country pottery.

These collectable, signed pots are available in the John Leach Gallery, adjacent to the pottery, which opened in 2003. The beautiful gallery is a light airy space, run by John’s wife, and its exhibitions feature the work of local and internationally-renowned potters.

Inspiration for John’s signature pieces comes from a variety of sources – travel to Africa, local museum pieces and the traditional skills of fellow potters from all over the world. But, mostly, explains John, he is inspired by what’s around him, including John’s Pond – a County Wildlife Site (CWS) which John dug in 1988, and is home to a wealth of local wildlife, including hundreds of dragonflies. Stretching over nine acres and flanked by 4,000 broad-leafed trees native to the area, the pond is an essential part of the fabric of the village, and a beautiful secluded place to find inspiration and solitude.

And John continues to work on restoring and developing the pottery too. In 2008, following a major restoration of two Grade II Listed buildings – the pottery cottage and the old pottery – the John Leach Pottery re-opened, and today, the pottery produces all its pieces on site, which are then sold in the adjacent gallery and shop. Bringing everything together has been very important to John, reinforcing the important identity of this very British, very local business.

At the centre of this, of course, are the pots – beautifully simple, woodfired stoneware, individually handcrafted in classic and friendly, unpretentious forms. For John they are as much a part of his family business as his wife, children and fellow potters, and to hear him talk lovingly about his stoneware is both endearing and inspiring.

In a world where our consumption of ‘things’ has reached an all-time high, craftsmen like John remind us how special it is to invest in something that you can keep for decades and which will become part of the fabric of family life. “These pots are reaching out to be used,” he says. “And each one has a personality all of its own. Warm and toasted by the flame, we like to think that the pots become friends for life.”

Tag: Lifestyle, Made in Britain, Meet the Maker