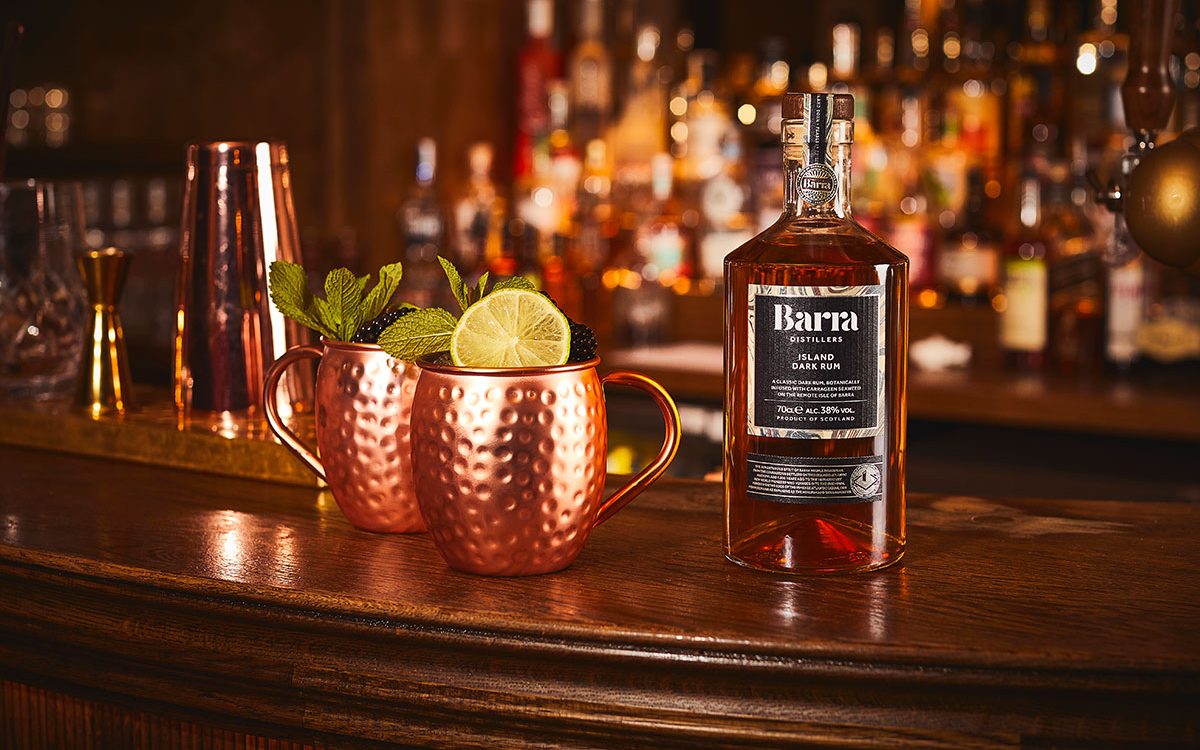 From heritage distilleries to family makers and new crafters, Britain is brimming with master blenders and unique spirits that are raising the bar. With creativity, legacy and sustainability at their core, these distilleries are well worth hitting the road for…

Situated on the Albury Estate in the heart of the Surrey Hills, the distillery sits adjacent to its namesake, The Silent Pool, a tranquil body of water that dates back to The Ice Age. Distilled from 24 different botanicals, which are collected where possible from the local area, Silent Pool Gin uses Bosnian juniper berries, liquorice root, cassia bark, orris, and bergamot, alongside honey sourced from a neighbouring beekeeper in its secret recipe. The distillers work closely with local farms and fruit producers in the area and uses their leftover fruit to make limited edition small batch gins including blackberry and damson gin, apricot aperitivo, and greengage gin.

The Silent Pool distillery tour takes visitors around the renovated barns that now house the bespoke copper stills, down to the banks of the Silent Pool, and culminates in a tasting of the award-winning Silent Pool gins, and a number of the small batch range of gins, cordials and aperitivos. In 2021 Silent Pool launched Green Man Woodland gin – the first spirit in the world to be sold in a paper bottle. Ethical in ethos and production, Silent Pool reuses, recycles and reduces waste wherever it can. The company ditched polylaminate capsules in 2018, replacing them with bottles and stoppers made of glass, capped with tin. To keep fuel miles to a minimum, Silent Pool’s original still is fired by wellseasoned local hardwood supplied from the Albury Estate, and Silent Pool’s Rye Grain Vodka is filtered using locally made charcoal.

A recent addition to the UK distillery family, The Henley Distillery was founded in 2021 by 28-year-old Master Distiller Jacob Wilson. Headquartered from a restored threshing barn just outside Henley-on-Thames, its small batch, single-shot sipping gins have already bagged a number of industry accolades. One of only a handful of distilleries in the UK owned and run by a Master Distiller, The Henley Distillery is one to watch. The range includes the multiple award-winning Henley Gin Classic Dry – giving a contemporary twist on a London Dry; and The Henley Gin Oriental Spiced – a complex blend of rich spices inspired by the Silk Road. Visitors can try their hand at making their own gin at The Henley Distillery’s new, fully immersive gin school. Guests see the distillery in action, learn about the history of gin and, of course, taste several of the gins made at the distillery. As the finale, guests have the opportunity to create a bottle of their very own bespoke gin under Jacob’s guidance using their own mini copper still and choosing from a library of over 100 botanicals.

Founded by Nina and Joe Howden in June 2019, the most easterly distillery in Wales has a craft spirit range, which includes the award-winning Silver Circle Aquavit, Wye Valley Gin, and Black Garlic Vodka, and its Botanical Vodka No.1 in the Monmouthshire village of Catbrook. The distillery has recently opened a new tasting room and shop in the heart of Chepstow, providing the perfect place to savour the fine range of Silver Circle’s spirits.

The shop offers Make Your Own Gin Experiences for up to eight people once a week (Saturdays), as well as tutored tasting sessions for up to 12 people. Alternatively, guests can enjoy the shop’s gin taster board (featuring Wye Valley Gin, Gunga Gin, and Silver Circle’s Catbrook Honey Gin), a cocktail taster board (featuring three of Silver Circle’s small batch, ready-to-drink cocktails) and the Aquavit Taster Board (featuring a taster of Silver Circle Aquavit along with two miniature aquavit cocktails). The ethically minded brand sells 50cl refill cans for its Wye Valley Gin, while walk-in customers at the Silver Circle Tasting Room in Chepstow can bring back their empty Wye Valley Gin bottle for a refill. Hospitality customers can buy the gin at trade prices in reusable 5L ‘jerrycans’ to refill their original bottle for use on the bar – saving on seven glass bottles entering the recycling stream.

The female-founded Nc’nean Distillery sits on the wild and captivating Morvern peninsular, on the beautiful west coast of Scotland. After leaving her job in London in 2013, Annabel Thomas spent four years raising funds and building the distillery from the ground up. Located a stone’s throw away from the tranquil Sound of Mull and surrounded by lush green hills, Nc’Nean was created to change the way the world thinks about whisky from Scotland. Annabel’s predominantly female-led team aim to create light and delicious spirits that can exist in harmony with the planet (NcNean is the UK’s first whisky distillery verified as having net zero carbon emissions from its own operations.) Nc’nean’s core expression, a smooth and elegant Organic Single Malt Scotch Whisky has flavours of citrus, peach, apricot and spice, while its Botanical Spirit is flavoured with ten locally grown botanicals and provides a refreshing alternative for gin lovers. Nc’nean is known for quietly rebelling against the ‘rules’ of traditional Scotch. The distillery uses longer mashing times and experiments with different yeasts not commonly associated with whisky making. The team also age their spirits in interesting casks, including Tokaji and Tequila, to bring creative flavours to their special releases. Visitors can tour Nc’nean Monday to Friday while sampling Nc’nean’s fine spirits, alongside different cask samples that make up their signature recipe.

Cornwall’s only single estate distillery is founded on five generations of farming and produces awardwinning vodka and gin. Unlike distilleries that buy in mass-produced ethanol, Colwith makes everything from scratch, using potatoes grown on their family farm to create their Aval Dor (Cornish for potato) spirits sustainably. Colwith Farm Distillery’s Aval Dor Original Vodka is the first British vodka ever to win a Platinum Medal at The San Francisco World Spirits Competition (SFWSC). Its range of gins use a variety of botanicals, including fresh lemon balm, rosemary and bay leaves picked from the family’s grandmother’s garden. This summer, Colwith has launched the UK’s first plough-to-bottle vodka school, where guests can make their own bespoke vodka from Cornish potatoes. Guests are invited to craft, blend and fill their own 70cl flavoured Cornish vodka to take home using a blend of botanicals bespoke to their taste. Alongside its vodka school, Colwith also offers gin experiences, tutored tastings and distillery tours.

Hattiers sources aged rums from around the world, blending them in Devon as part of a family business. The UK’s first B Corp certified rum – an award for high social and environmental performance – Hattiers has been plastic-free from day one and has a carbon negative workforce. The brand produces Eminence Blended Aged White Rum, Egremont Premium Reserve Rum and its Resolute Navy Strength Rum, and in 2022 founder Philip Everett-Lyons began offering guided distillery tours of the South Devon-based facility. Guests can explore Hattiers blending room, learn about the impact of oak and cask aging and discover how they blend their three premium rums. Eminence is a light–medium bodied, dry blended aged white rum. Egremont is a blend of four cask-aged rums hand-picked from across the Caribbean and Central America and gently paired with pure soft spring water from the hills of Dartmoor. And finally, Resolute is a blended aged Navy Strength rum, made using rums from Barbados, Australia, Guyana and Jamaica.

Launched by husband-and-wife team Martyn and Karen Luke in 2018, the Heart of Suffolk Distillery is based in Finbows Yard, Bacton. The family business distils small batches of a London Dry style gin with nine carefully chosen hand crushed botanicals to create a modern and refreshing taste. Their signature tipple is named to honour Betty, Karen’s mother, who shared the same love and enjoyment of a good quality gin. Each batch of around 70 bottles is hand signed and numbered by master distiller Martyn. The Heart of Suffolk Distillery is open to the public and offers a relaxed experience for those wanting to enjoy a sample and purchase a bottle of the handcrafted gin.

Something a little different for gin, whisky, vodka and bourbon lovers – this year visitors will be able to enjoy a train ride and a tipple, thanks to the opening of a new rail link on the volunteer-operated Cambrian Heritage Railways, which will connect Oswestry town centre to Henstone distillery on the outskirts of the charming North Shropshire town. The 15-minute journey takes visitors to one of Shropshire’s most lauded small-batch producers where Henstone’s range of award-winning gins, whisky, charcoal-filtered vodka and Old Dog Corn Liquor is made.