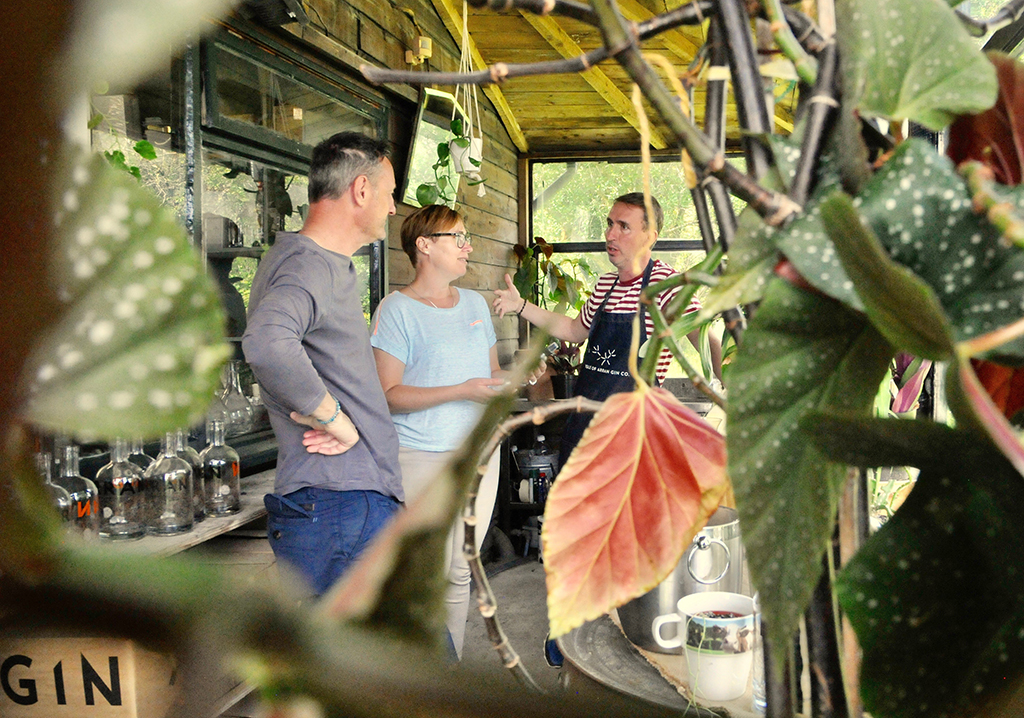 Meet the makers of Isle of Arran Gin

There’s a growing artisanal movement on Scotland’s Isle of Arran, and now it has its first craft gin. From a cosy lounge by the crackling fire at Cladach Beach House, we meet the locals behind the brand.

A small island off the southwest coast of Scotland, Arran is accessed via the daily car ferry from the mainland; the occasionally-snow-capped Goat Fell, its highest mountain, looming dramatically into view. It’s a trip that takes just under an hour from Ardrossan, wild weather pending, but the island’s peaceful charm is immediate. Popular with hikers and cyclists for its stunning landscapes, Arran is also home to some impressive food and drink producers, with whisky, cheese and ice cream being strong drawcards.

But the island has a secret: one of the most joyful gin distillery locations you may ever stumble across. Isle of Arran Gin co-founders Stuart Fraser and George Grassie still revel in visitor reactions to their rustic set-up at the Cladach Beach House, tucked away on the coast near Brodick Castle. “I love watching it happen the first time,” says George. “This is a very magical little corner. I think people respond to that.” A locally loved cabin that was once the Arran Nature Centre, and then home to a stained-glass maker, has been sensitively renovated by the lads, using furniture they’ve either found or made. The result is an endearing lounge-room-meets-botanical-lab vibe, complete with an open fire, a casual piano in the corner, and stacks of vinyl records piled beside uninterrupted views from a sunroom across the Firth of Clyde. And some random dinosaur sculptures on the beach. “We weren’t looking for something as quirky as this, to be perfectly honest,” says Stuart. “But we want to try and reimagine the distillery experience a bit and put people really close into the production as much as possible. So, while you’re sitting here having a tasting session, rather than standing about a boardroom kind of environment, you sit here by the fire, you have a little taste, we have a blether about it.”

A gap in the Scottish gin market

Far from having distilling or drinks industry experience, Stuart and George have come to the business in a roundabout way. George regularly forages for botanicals on Arran, but primarily to use in the kitchen: he’s an artisanal baker at Blackwater Bakehouse at Blackwaterfoot on the southwestern side of the island, having previously honed his craft in Norway.

Stuart and his wife own the Bay Kitchen & Stores, a cafe and grocery shop that stocks George’s bread in Whiting Bay, a 20-minute drive south of the Beach House, which they purchased in 2013 after running a hair salon in New York. “Straight away I noticed we were selling a lot of craft gins and craft beers,” says Stuart. “I said to George ‘we’re selling a lot of gin from all these different [Scottish] islands, why not our own? There’s no other Arran gin. I spotted a gap in the market and we jumped in.”

A New York–based friend of Stuart’s, Ross Hamilton, is the third (mostly silent) Scottish partner in the business. While the business was launched in 2017, the visitor experience at the Cladach Beach House has been a work in progress, with a series of event pop-ups across the summer of 2019 helping them hone the offering, as well as establish partnerships with local food vendors.

While they might be novice gin-makers, they have had some expert advice and guidance, and become almost evangelical of their ‘shoreline-to-mountain’ approach as they bring out boxes of the local ingredients that comprise Arran Gin, recalling foraging expeditions with their friend Mark Williams, of Galloway Fine Foods. “He’s worked with other gin companies and he had a good handle on what grows here…because he [also] grew up here,” says George. “And he does a lot of wild booze as part of his repertoire.” Initially picking between 50 and 60 plants, of the Arran-grown botanicals they eventually settled on six for their gin: sea lettuce (“salad fresh, but very full of that rockpool brine…sort of coastal scent”), hogweed (“the seeds are incredibly punchy in flavour: orange bitters, coriander-like aromas…a real belter”), meadowsweet (“one of the big flavours”), lemon balm (“our idea for citrus… but you also get [notes of] forest floor, woodland tobacco box”), noble fir shoots (“more of a grapefruit pine not a floor-cleaner pine”) and fuchsia flowers (“rifled from the [Brodick Castle] National Trust gardeners’ hedge…they actually quite like it now”).

And while they use other ingredients common to most London dry gins – juniper, a little bit of orange peel, cassia bark and angelica – they venture that the microclimate on Arran lends the locally grown ingredients a somewhat mystical, unfathomable power, citing an experiment they did with a friend who picked the same plants on the mainland in Largs. “It’s the same stretch of water but the Arran ones are much stronger. Why are the plants bigger and better here?” Stuart shrugs. “We’re not asking too many questions…just accept it and enjoy them.”

While the Cladach Beach House was being readied, the gin has been distilled on the mainland at Glenshee Craft Distillery in Perthshire with advice from Simon Fairclough (of Persie Gin), who they met at a drinks event in Glasgow a few years ago. “We could go somewhere a lot closer to do some of our work than go all the way up into Glenshee but he’s our guy,” says Stuart. “We just have that connection; we’re almost like his apprentices.”

They make between 300 to 400 bottles a month and the gin is sold mostly on Arran as well as some bars and shops on the Ayrshire coast, part of a deliberate ‘anti-distribution’ philosophy. “We want to try and have a personal relationship as much as possible with the people selling the gin, because it does require a bit of education,” says Stuart. “It’s not trying to be a supermarket brand.”

Future expansion of the business

Having dipped their toes in the gin waters, the boys already have another product: Arran Cassis made from blackcurrants in Whiting Bay. There’s potential for an Isle of Arran kombucha and/or kefir down the track, expanding the brand more broadly into a drinks company. “It’ll be whatever it’ll be,” says Stuart. “We really don’t have a particularly explicit business plan. I think we are to some extent just going where it takes us.”

The local lads favour independent places that are in keeping with their rustic, pared-back, community-spirited ethos.

Mara Fish Bar & Deli: “Offers an authentic taste of the windswept, salty Arran coastline. It’s not a fishmongers or a fish-and-chip shop, it’s proper cheffy fish. Local catches always come with a twist; think of it as a premium takeaway served up right by the beach.” mara-arran.co.uk

The French Fox: “The best of traditional French cooking sold from a cute old Peugeot van, which they drive around the island.” facebook.com/thefrenchfoxfood

The Sandwich Station: “It’s a hut in the middle of nowhere which is so cosy you think ‘I shouldn’t be getting a sandwich this good from this hut in this place’.” thesandwichstation.weebly.com

Isle of Arran Cheese Shop: “You have to get the Arran Blue cheese from Bellevue Creamery, I <George> use the creamery’s whey to make my croissants (at Blackwater Bakehouse: facebook.com/bakehouseblackwater). Calum’s the only real cheesemaker left on the island now and it’s the best blue you’ll taste bar none. He’s a milk whisperer.” arranscheeseshop.co.uk

The Wineport: “Our next-doorneighbours in Cladach, serving great-value lunches… and they have outdoor tables. It often doubles as a pop-up space for other foodie events. Right up our street (and on our street).” wineport.co.uk