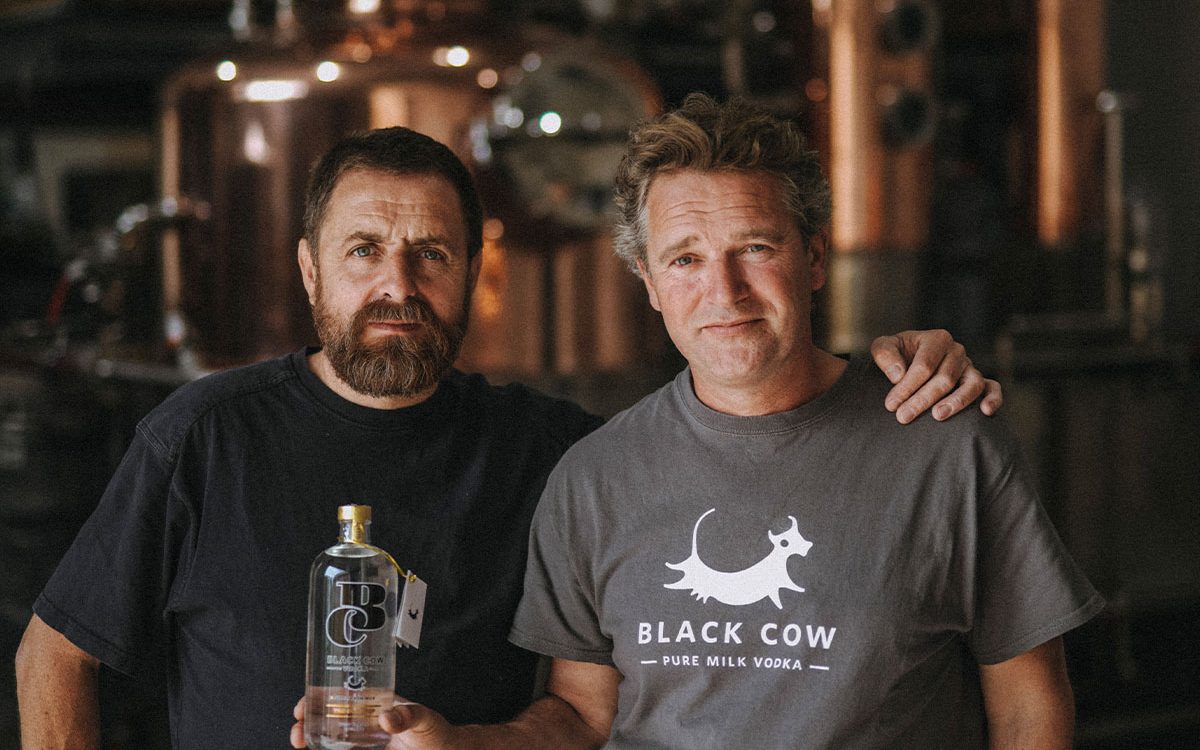 Meet the makers of the world’s first pure milk vodka

Visiting farms deep in the West Dorset countryside, it’s not unusual to discover examples of innovation meeting necessity. But would you expect to find the world’s only vodka made from cows’ milk? We meet the trailblazers responsible…

“West Dorset is a great place to visit, it’s a lovely gentle landscape. But a lot of people drive past us or go on to Cornwall, and there’s a lot to do here.” Paul Archard (aka ‘Archie’), co-founder of Black Cow Vodka, is sitting in the custom-designed Bar + Kitchen adjoining the distillery in Childhay. He casually reels off the outstanding cheese, cured meat and wine producers of the famed agricultural region; the flourishing arts scene; the local creatives making knives and “amazing things out of metal”. But what about the little project he has going with his dairy farmer neighbour, Jason Barber? “We set out to make the world’s best vodka, that’s what we set out to do, basically,” chimes in Jason. “And we’re pretty much there, to be honest.”

When whey is not a waste product

Jason’s family have been making Cheddar cheese since 1833, which makes the Barbers the oldest surviving Cheddar cheesemakers in the world. ‘Basically, my cows are milked twice a day and I sell the milk to my family,” says Jason. “They want the protein [the curds] to make the cheese and we want the lactose [from the whey] because it’s the sugar that makes the alcohol.” They venture they’ve made one of the most sustainable vodkas on the planet, given whey’s reputation as a waste material. “Typically, whey is a rather forgotten-about product,” says Archie. “Especially in this country.

The Italians really know how to use whey. We end up feeding it to the pigs. What we’ve done is we’ve taken an almost valueless by-product from cheese-making production and turned it into something wonderful.”

The whey is fermented with a special yeast that converts the lactose into alcohol. This milky beer is distilled in a pot called Ermintrude (named after the cow from children’s TV show The Magic Roundabout), then blended and triple-filtered into a very pure, smooth and velvety vodka. The realisation that they didn’t need to add water was a significant breakthrough texturally and taste-wise. “There’s a real lack of minerality,” says Archie, “It’s incredibly soft. It’s got this creamy texture and that’s because everything in that bottle comes from milk.”

“Not needing to add water was a significant breakthrough… It’s incredibly soft. It’s got this creamy texture and that’s because everything comes from milk”

While it was initially difficult to get their distilling licence (“When we talked to HMRC, they didn’t know quite how to deal with it”, says Archie), they give kudos to “maverick” Julian Temperley from Somerset Cider Brandy Company who obtained the UK’s first-ever cider-distilling licence, for paving the way and breaking the monopoly of larger distilleries. The first bottle of Black Cow Vodka was sold in May 2012 and then it was a matter of winning over bartenders and distributors. “When we first went to the bars, there were probably about 12 vodkas on the back bars,” says Jason. “Now there’s probably five: you’ll find a rye one, a wheat one, a milk one. Now it’s all about the raw material and I like to think that we had something to do with that.” The vodka is now sold in 17 countries. “Once we get people to try it, they’re normally converted to it,” says Archie. “We have a very good conversion rate.”

‘What grows together goes together’ is the ethos behind their recommendation of pairing their pure milk vodka with cheese. “We really see ourselves as the foodie’s vodka of choice and it’s a great thing to have with food,” says Archie. “In Poland and Russia, people think they knock back vodka as shots. They do but they’ve always got little bits of food, whether it’s nuts or dried fish. One of the best things is cheese. Jason’s family made this incredible Black Cow Deluxe Cheddar that we sell at Fortnum & Mason. It goes really well with a bit of Jarlsberg or a bit of Brie or Stilton or anything. It also goes really well with seafood, it’s great with oysters, it’s great with prosciutto.”

They have branched out into a sustainably produced English Strawberries Vodka (launched in the summer of 2019) as well as a Christmas Spirit that was much lauded by locked-down Brits across the winter of 2020. But bartenders are particularly impressed with the purity of the original spirit, which lends itself to holding fragile flavours very well. “Everyone makes Espresso Martinis with liqueur – Kahlua or Tia Maria – we don’t,” says Archie. “The reason why they do that is to make it sweeter and because they want it to froth up, so it’s got a head like a Guinness. But if we just put in maple syrup and make an espresso, you put them with our vodka in a shaker, and you get the most perfect Espresso Martini with the perfect head like a Guinness, and that holds because of the lack of the minerality in the water. Restaurants love it because they don’t have to pay for the shot of the liqueur, which means they make a better profit on it as well.”

While the team have missed hosting distillery tours during Britain’s COVID-19 lockdown, there’s usually a variety of idyllic, bucolic experiences for food and drink lovers. “We’d go out on the farm and take you around the cows,” says Jason. “Have plenty of drinks, see a bit of the countryside.”

Acclaimed local chef and restaurateur Mark Hix is also a frequent visitor to the Black Cow Bar + Kitchen, having designed the three-course lunch that’s part of the Distillery Experience, which also includes a cocktail-making class in addition to the distillery tour. “Mark puts a recipe together for us with locally sourced food,” says Archie. “We integrate the vodka and the cheese. There’s hand-picked scallops out of the bay at the moment or someone’s shooting rabbits or picking mushrooms.”

Whatever the future brings, Archie and Jason remain as inventive as ever, particularly when it comes to cocktail creations. “I would love to do a Gorgonzola cheese wash martini with a pear infusion,” says Jason. “Do you think the world is ready for it? We could do it.”

While Archie concedes that he and Jason “always like to think quite big”, despite their enthusiasm and ambition, neither can have truly anticipated the outcome of a casual chat in 2002 with one of the dairy workers, Jozef. Jason was gauging Jozef’s opinion on their latest distilling experiment, an eau de vie: “he’s Polish, so I said to him, come on Jozef, how do you make vodka, it’s your national drink? And he said ‘anything with sugar in it’. And I thought, hold up, milk’s got sugar in it.” Archie remembers the two of them looking out the kitchen window towards Jason’s herd of 250 grass-fed dairy cows. “We took one look at those lovely ladies and I looked at Jason and saw a lightbulb go on over his head.” It took years of experimentation to get them to a unique product: a vodka not just derived from milk, but made entirely from it.

“We already love going to Mark Hix’s restaurant (The Oyster & Fish House in Lyme Regis: theoysterandfishhouse.co.uk, but he’s just taken over this pub, which locals have been going to for decades, and it’s amazing.”

“Our friend Cass is the chef there and the owner, with his wife Louise. Foodwise, it’s really good.”

“Run by our friend Mary-Lou Sturridge, who used to be the MD of the Groucho Club [in London]. She’s set this up, which is really a hotel. It’s a really good place to stay, very relaxing, right on the sea”

“The Ollerod, which is the name of a flower, is a wonderful place to stay, the food’s really good, the bar’s really lively and the rooms are really nice.”

“Guy Mallinson, who is a friend of ours, has built absolute luxury treehouses, which have got beautiful bathrooms in them: proper five-star treehouses.”

“Harry takes people out on day trips fishing, which is excellent if you want to come and catch your own fish and eat it.”