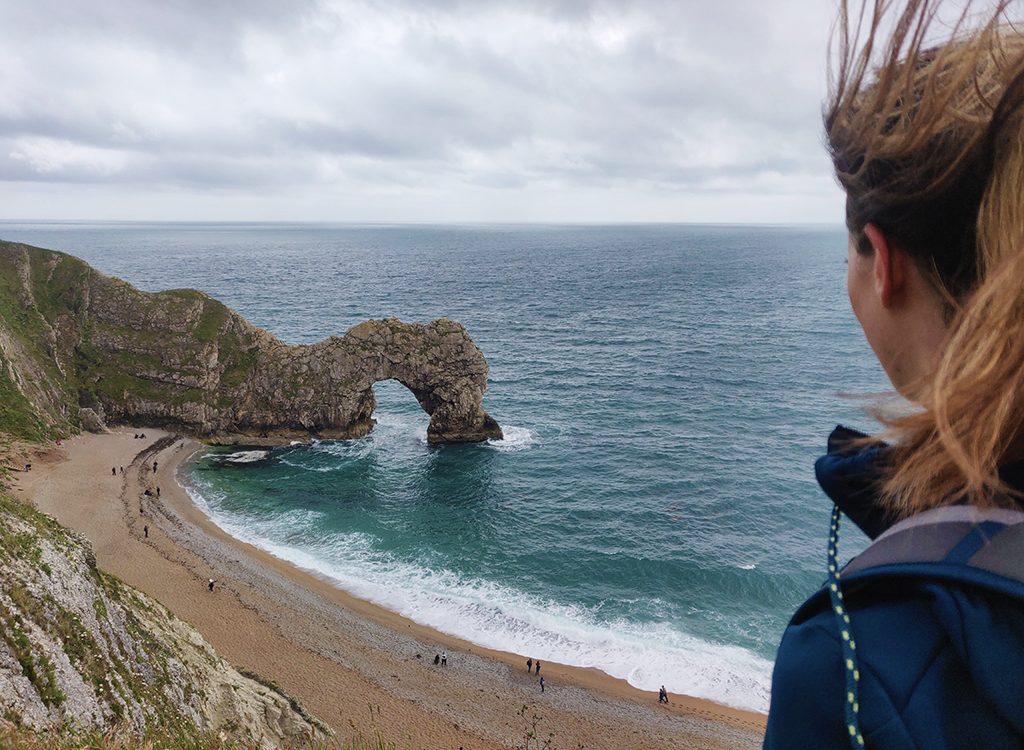 Thousands take to their feet each year to raise much-needed funds for the Macmillan charity, in support of people living with cancer, each route taking hikers through stunning countryside and breathtaking landscapes. Our Editor Jessica Way shares her experience.

Yesterday I was one of 2,217 adventure trekkers to take on The Jurassic Coast Mighty Hike – a walk which meanders from Weymouth to Wareham – the 2nd in a series of 8 one-day marathon hikes taking place across the UK this summer, which kicked off last weekend (8 June) with the South Coast hike, from Brighton to Eastbourne.

The weather was windy, rainy and hazy as people gathered at the start to register and warm, up but it didn’t dampen our spirits. There was a warm and welcoming atmosphere as people sipped their teas and coffees and offered gentle words of reassurance.

The very first hikers set off at 6.50am, at which time I was still asleep in the Lodmoor Country Park Premier Inn, just a few minutes walk from the start line. Each participant is given an allocated start time before event day, distributing the flow into groups of around 250 hikers, setting off together at 20-minute intervals.

My start time was 9.10am, so there was plenty of time for a hearty breakfast in the Brewers Fayre Lodmoor, next door to the Premier Inn, which had opened its doors earlier than usual to cater primarily for the first waves of Mighty Hikers.

I cheered on the passing runners of Lodmoor Park parkrun, a weekly timed 5k running event that takes place across the UK all year round in hundreds of destinations, often country parks, and how I would usually get my weekend started. Then camera and route map to the ready, it was time to set off from Lordmoor Country Park, along the South West Coastal Path.

Despite being reasonably fit from regular parkrun and the occasional 10k or half marathon, the concept of walking 26.6 miles, over challenging terrain, was a completely new experience for me. Although I had followed some of the recommended training in the lead-up to the event, this was my first real test of endurance. I was a little apprehensive at the start, mostly about the possibility of getting blisters. My friend Rich reassured me and, safe in the knowledge of having packed blister packs, snacks, extra socks and covering almost everything we had read about on the forums beforehand, we were as prepared as could be.

The hills were very steep in the first stretch of the course and, as it had been raining, we carefully watched every step. Sadly, we witnessed someone twisting their ankle just a few miles in – medical assistance was with them within just minutes. We marched on, and there was a real sense of achievement with reaching the top of each ascent. With so much encouragement, enthusiasm and determination from everyone around you, the atmosphere was immensely sustaining.

There was a short hold-up as a queue formed for negotiating a stile located at an exceptionally elevated and exposed part of the route. This was a gruelling few minutes (felt like 10) and the gale-force winds thrashed any chance of retaining a good hair day. Once over this hurdle, it was a beautiful stretch, where I spotted the fabulous Osmington White Horse to our left, and the coastal views were utterly breathtaking.

Our first pit stop was at just over 5 miles – and wow, everything was there, energy bars, fresh fruit, hot drinks, Mini Cheddars, jelly babies, chocolates, water stations, toilets (with no queue) – it was fabulous. Smiling faces, music, comfy chairs, it felt like the best of a boutique festival, only there was little time to relax.

We continued, refuelled and now rather excited by the prospect of lunch, if the first pit stop had been anything to go by. Durdle Door is one of the main highlights along this route – its natural limestone arch is one of Dorset’s most photographed and iconic landmarks. As an additional service, there is a professional photographer strategically located here, offering hikers the opportunity for a memorable photograph.

From Durdle Door the route took us inland for around half a kilometre through some trees, passing the beautiful Durdle Door Holiday Cottages, for the base point of our lunch stop. There was so much food on offer, with options to cater for vegetarians, vegans, coeliacs and more. I filled my plate with falafel, fresh salad and pasta – it was delicious. I finished with a chocolate cookie and cup of coffee as people began to cheer and sing and dance now that the sunshine had come out!

The weather from this point onwards was like stepping into a completely different world – it was glorious, and nothing could have lifted our spirits more for the final 13 miles than the sunshine and blue skies.

Just a couple of miles further on and we reached the picturesque Lulworth Cove. Leading down to the beach was a pretty cobbled street, lined with quirky gift shops, cosy pubs and stylish coffee shops. It was hard to resist stopping at Marshfield Farm ice cream parlour, serving some of the best ice-cream in Britain – it’s rum & raisin for me every time. Some hikers opted for the pub garden, in need of a rest, while we passed others enjoying fish and chips on the beach.

This was the last of the coastal route, taking trekkers along the sandy beach of Lulworth Cove, up some steep, challenging steps, where you walk for a short distance doubling back on yourself in the opposite direction before heading inland.

The rest of the afternoon walk took us past West Lulworth and the adorable 16th century Castle Inn, through the sumptuous green fields of Coombe Keynes up to East Stoke and East Holme. We passed beautiful gardens, wildlife and cottages, with a mix of road, countryside, bridleways and woodland. The route continued over Knowle Hill with its amazing views across Purbeck and Poole Harbour, and across the National Trust’s Purbeck Ridge.

We met an inspiring lady from Plymouth called Natalie (dressed below in a pink toutou) in the last mile of our walk, and she shared her emotional story. Having lost her husband (when their daughter was just two years old) and other family members, she wore a photograph of one of her best friends, Jacqui Batterbee, on her t-shirt.

Jacqui was a lady who sadly lost her heroic fight against cancer in January this year, and who had raised thousands of pounds for charity with multiple fundraising events including cycling challenges in Vietnam, Cambodia, Cuba, Africa and Brazil. Described as a shining example to all, full of adventure and determination, and someone who lived every day to the full, she has inspired the JB Warriors team of 14 to raise £4,097 so far – smashing their £3,500 target and still going strong.

Myself and Rich have since donated, their Just Giving page is justgiving.com/fundraising/jbwarriors

Together we approached the fabulous Corfe Castle, standing above the pretty village of the same name, a landmark indicating the end of our challenge was almost within reach. As we walked to the finish line, family and friends lined the way, cheering and congratulating. You are given a medal and glass of fizz as you cross over the line. There’s a great atmosphere, with tents of more food for you to help yourself, hot drinks and water stations. There’s a celebratory party atmosphere, and the support is contagious, as you find yourself then cheering on those coming in close behind you.

The registration fee to take part in this fantastic event is only £25 per participant (with a pledge to raise a minimum of £250). The catering and organisation from the many marshalls and medical professionals seen along the route was extremely impressive – you really couldn’t fault the event planning and day itself. It was fantastic.

An unforgettable day, experienced with so many like-minded positive people, each with their reasons for being there, and their own unique story, but with one thing in common – a shared passion of feeling good about giving back, made even better when doing it collectively.

FIND OUT MORE ABOUT MIGHTY HIKES

Next month there are hikes taking place along Northumberland Coast, Lake District, Thames Path and Peak District (July) followed by Rob Roy in Scotland and Wye Valley in August/September. There are still places to sign up for Wye Valley 2019.

To find out more and sign up to Jurassic Coast Mighty Hike 2020, visit https://www.macmillan.org.uk/get-involved/fundraising-events/event-detail/1886/jurassiccoastmightyhike2020

Set on an exclusive clifftop overlooking the famous sands of Fistral Beach, The Headland is, without doubt, one of the grandest and finest hotels in […]