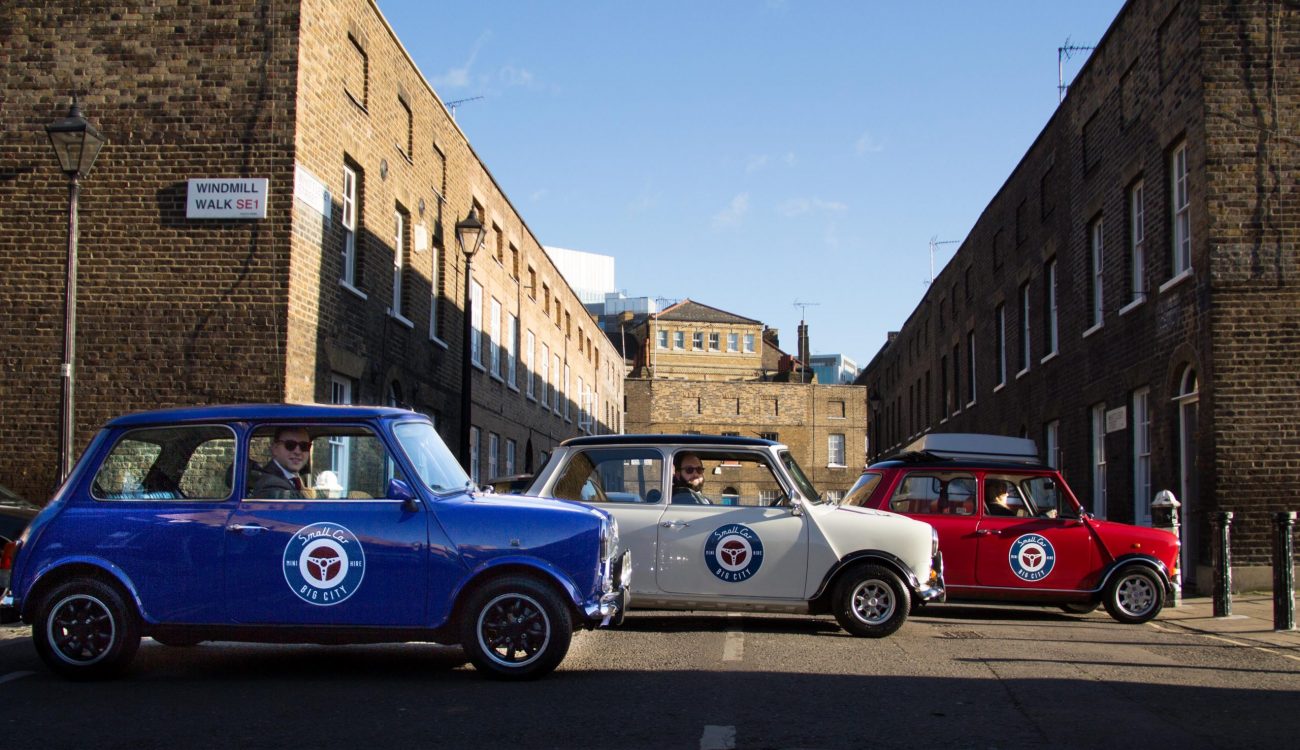 Our tour of London begins at Waterloo Station, near the South Bank of the River Thames, with Lilly, our beautiful white Rover Mini Cooper (1991) – a true British icon of the 1960s – and our cheerful driver for the day, Samantha, eagerly awaiting our arrival. Following a warm welcome, we were whisked away in true British style – the sun shining, and London’s hidden gems just moments from our discovery. We were immediately made to feel relaxed, both inside and out, with smiles from people on the street also sharing in our enjoyment for this vintage classic as we cruised past. We felt infinitely cooler than I have ever felt on an open-top bus! We chose to experience London’s Best Bits Tour, and having worked in the city for years, I wondered how much of this tour I would, or at least should, already know. Surprisingly, however, I knew very little – with such fascinating information being generously shared by Sam, conversations flowed and enthusiasm was reciprocated, right from the word go. Lilly sneaks into roads, and finds short-cuts, and gaps between the traffic, winding through narrow streets to take us to places that only a Mini Cooper can go, while our extremely knowledgeable driver delivers historical stories, countless quirky facts and insider-wisdom.

What better way is there to discover the city than through the eyes of its most quintessential car, and whether you’re an intrepid London traveller, a proud Londoner over a life-time, or an international visitor for the very first time to the UK, I highly recommend doing this, and, if my recommendation alone isn’t enough, take it from TripAdvisor, who have voted smallcarBIGCITY, the company behind these unique tours, ‘Top London Attraction’.

So, as you’ve gathered by now, it’s one of the best experiences I have had in ages. You find yourself taking in the views and details of London in a way that the sightseeing buses just won’t do for you. Like so many others, I have walked, cycled, driven, tubed and taxied myself across London, paying very little attention to the city in my passing. Following this experience, I will certainly be taking a more inquisitive and appreciative eye, during city-breaks and business commutes of the future.

With such a valuable wealth of information shared during the tour it is difficult to know which highlights to mention. With every new view and stopover there was something to discuss, be it explanations of road names, to the reasons behind the details on monuments, buildings and iconic landmarks. We discovered something unusual at every encounter and rev of the engine.

We visited the very colourful Leake Street Tunnel, just underneath Waterloo train station and behind The Eye. A disused 200-metre-long tunnel, jam packed full with impressive visual displays of graffiti, first used by Banksy in 2008, and still known by many as ‘The Banksy Tunnel’. Art covers the underpass wall, which was originally built for the Necropolis Railway, opened in 1854 as a reaction to severe overcrowding in London’s existing graveyards and cemeteries, operating funeral trains to take bodies out of town to the newly-built cemetery in Brookwood, Surrey.

On 16 April 1941, during World War II, the railway was heavily damaged in an air raid with much of the building destroyed and the tracks to the station rendered unusable. It was decided that reopening the London Necropolis Railway was not financially worthwhile, and so it was never used again. Today the tunnel is operating as an authorised area for artists to express themselves, with the art regularly changing – and it’s quite impressive. However, when Sam passed me a couple of coloured pens to add my own mark to the wall I felt it was best that I left this to the experts. While driving over Waterloo Bridge, Sam explained this is also known as the Ladies’ Bridge because it was re-built by women during WWII who resourcefully used Portland Stone which self-cleans itself in the rain. Covent Garden is an absolute joy to visit in a Mini! Originally the Convent Garden of the Abbey of Westminster, it was misspelt on the original signage, and since then it has been left and re-named as Covent Garden. →

We pass by the Garrick Club, discussing A.A. Milne leaving the rights to Winnie the Pooh to the club, as one of his four beneficiaries, each of whom later received £300m from Disney when the company purchased those rights. We swiftly followed that by nipping around Seven Dials, an intriguing network of seven atmospheric streets that link Covent Garden to Soho. Here we took a moment to soak up the buzzing atmosphere and talk about our favourite independent boutiques and heritage brands and the success of Neal’s Yard, which first opened its store here in 1981.

Before leaving Covent Garden, we also discovered Bow Street’s Magistrates’ Court and Police Office, recently given the go-ahead for a multi-million pound development to transform the building into a 76-bedroom hotel with a museum and 16 additional sleepover cells.

We drive past Cecil Court, just off Charing Cross Road, widely believed to be the inspiration for the Wizard’s high street, Diagon Alley, in the Harry Potter series. While driving through St James’, I learn that the most famous hatters in the world, Lock & Co, have been owned by the same family since 1676, we admire Berry Bros & Rudd, one of Britain’s oldest wine and spirit merchants, and pass by Dukes Hotel, famed as the place where Ian Fleming, creator of James Bond, enjoyed his Martinis, ‘shaken, not stirred’.

Sam then tells us about the origin of the name Mayfair – the area which, from the 17th century, accommodated the ‘May Fair’ – where we go on to appreciate the former home of The Beatles’ music label, 3 Savile Row, and look up at the roof of the building where they famously performed their last ever public appearance, the rooftop concert in 1969. We drive past and discuss the prestigious Brown’s Hotel on Albemarle Street, which claims to have been the site of London’s (and Britain’s) first ever telephone call in 1877, made during Alexander Graham Bell’s visit from Boston.

Next it’s across Oxford Street, so named as it was originally the Roman road that led to Oxford, and down to Westminster, where we learn that all British citizens are entitled to take a tour of Big Ben (Elizabeth Tower) by simply writing to their local MP to apply for access to visit.

The 75-minute tour includes taking visitors to the top of Big Ben, looking at the clock faces, the clock’s mechanism, and the bell itself. They run three tours a day with 16 people per tour. I have since discovered that the tower is due to close to tours, possibly for two years, to enable essential maintenance work to be carried out.

As we drive along Whitehall, past Banqueting House to our left, Sam points out a clock in the archway of Horse Guards Parade opposite on the right, and we notice that on the face at 2pm is a black mark. Sam explains this commemorates the execution of Charles I, carried out at 2pm, on January 30th 1649.

Then, one of my favourite parts of the tour. Sam zips down a side-road to an insignificant looking hidden-away location, and James Bond Skyfall filming location, to see a door outside an official government building, explaining that it leads to London’s secret tunnel system, which, among other places, would offer direct access to Buckingham Palace. There is, of course, no entry allowed, and the door is surrounded by multiple CCTV cameras – so, a shame but we can’t explore this one further, and we’re quickly off again.

In Trafalgar Square, we enjoy discussing Nelson’s Column’s bronze panels and bronze sword, cast from captured French cannon, and then, drive in the direction of his gaze, where he is said to be surveying his fleet, looking to the Mall. First though, we take a loop round, and pass the official entrance to St James’ and Buckingham Palace, Lilly gracefully cruising beside the wonderful Royal Horse Guards Parade. We appreciate the detail of each lamppost bearing the effigy of a galleon, and bring our thoughts back again to Nelson. This was also where Sam pointed out the world’s smallest police station, more of a police box really, located in a hollowed-out corner of Trafalgar Square, but with a direct line to Scotland Yard.

I have taken so much with me from this tour. Even as I am writing this, I am following one of Sam’s recommendations, and admiring the sights all over again from a spectacular 155-metre view above London, sitting in the city’s highest public garden, Sky Garden – the famous enlarged glass dome of 20 Fenchurch Street – described by those in the know (like Sam) as ‘The Walkie-Talkie’, because of its distinctive shape.

smallcarBIGCITY officially launched in the Autumn of 2009, exactly 50 years to the day after the first ever classic Mini rolled off the production line. The business was founded by Robert Welch, who has been driving a Mini around London since he was just 17. Jules, his first 1974 Mini Cooper, is still in the fleet, along with seven other fabulous Cooper classics.

As well as the themed tours (which include Live Like A Local, Beatles Tour, Christmas Lights Tour, and Harry Potter Tour) there is also the option to design your own perfect trip, self-drive hire and wedding car hire. Prices for the tour start from £119 per hour.