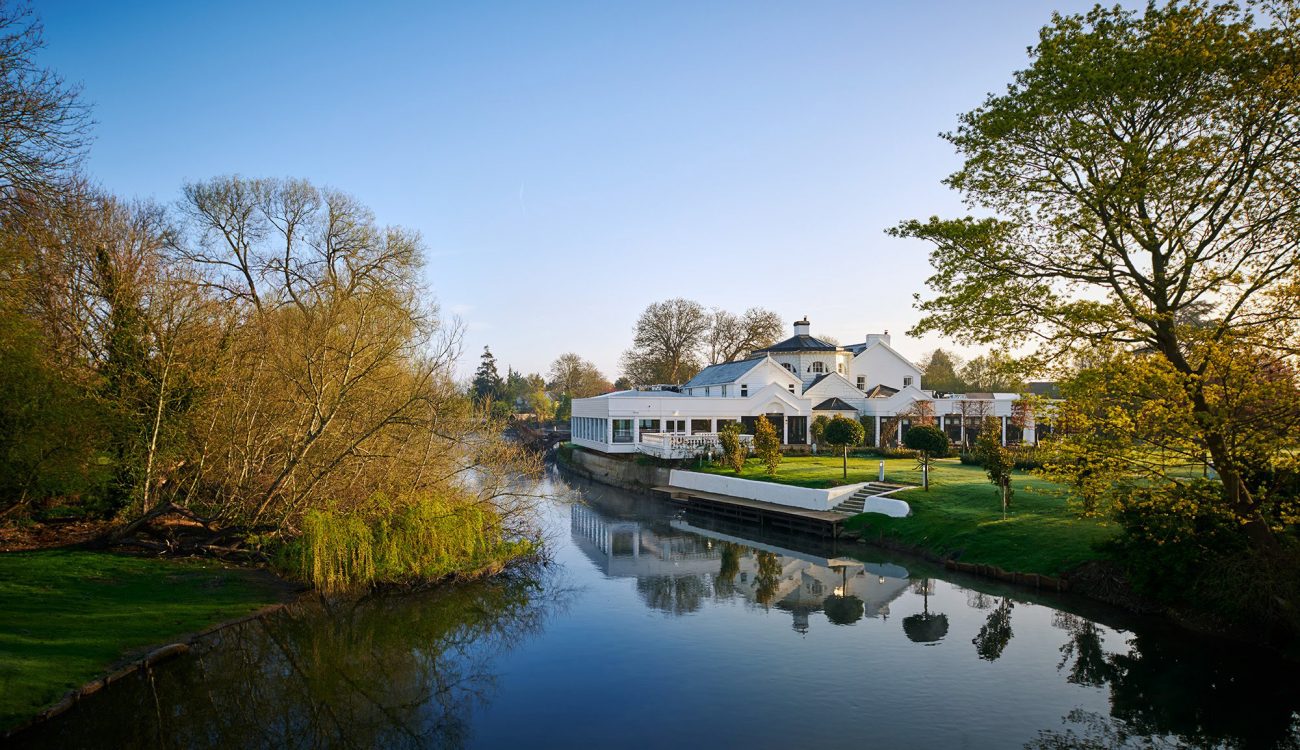 We discover riverside delights at Monkey Island Estate near Bray, an island idyll, less than an hour from London. Few estates can claim to be built upon the historical DNA of a nation, yet after the 1666 Great Fire of London barges scattered rubble from the capital’s reconstruction onto Monkey Island in Berkshire, laying the foundations for this riverside retreat.

The small island, set near the pretty village of Bray on the Thames River, in fact dates back to around 1197 when local monks  christened it Monks Eyot – one possible root of the estate’s moniker – however, it was the ruins from the Great Fire of London that raised the isle above flood level thus making it possible to build upon. The 3rd Duke of Marlborough fell in love with the riverside plot and in 1723 created an idyllic angling retreat on the island with a two-storey Fishing Temple and octagonal Fishing Pavilion commissioned from Palladian architect Robert Morris.

Despite changing hands and guises over the centuries, the Temple and Pavilion survived and today the stunning Grade I listed buildings remain the backbone of Monkey Island Estate.

Now under the ownership of the YTL Group, Monkey Island Estate opened as a new luxury boutique hotel earlier this year following a three and half year restoration. Located 35 minutes by train from Paddington Station, the luxury estate may be conveniently located but feels a world away from the city. River charm runs deep here and guests can even arrive by boat – the hotel’s private wooden launch, Dragonfly, will pluck you from the nearby quays at Windsor, Cliveden, Marlow and just about anywhere in between.

The hotel offers 41 bedrooms and its elegant, refined design is the calling card of New York-based Champalimaud Design, which also has The Dorchester and The Gainsborough to its name.

Most guest rooms are located in the Temple building where a couple of the larger suites also boast balconies and terraces. The pièce de résistance, however, is The Wedgewood Suite, which occupies the original building and boasts magnificent near-360° views of lawns and riverbanks. Its spectacular ceiling features Neptune, shells and mermaids in high relief Wedgewood blue plasterwork and feels regal in every sense of the word. Guests warmed by quintessential British touches will delight in the stunning bone china tea set, dark panelling, historic portraiture, and semi-canopied bed. Modern luxuries also abound with cloud-soft linen, a river-view roll-top bath, vast waterfall shower, and fragrant Aromatherapy Associate toiletries.

Monarchs, aristocrats, literary icons and a multitude of famous names from war poet Siegfried Sassoon to HG Wells have enjoyed river life at Monkey Island over the past 800 years and the hotel proudly celebrates its legacy.

A 1905 photograph on display shows Edward VII enjoying afternoon tea under the island’s walnut trees and on arrival moreish orange and walnut brownie slices await us, giving another nod to the hotel’s rich history. The brownies are made by executive chef William Hemming using a traditional recipe dating back centuries to the time when the island was home to orange and walnut trees. Accompanying the delectable goodies is an embossed card with a quote from Frances Countess of Hertford writing in 1738 of the island’s horticulture.

Historical touches such as a these are frequent and engaging, ensuring every guest’s stay is intertwined with the island’s fascinating story.

On our side table, a complimentary gin elixir makes the perfect sundowner to recline with as we relish the Wedgewood Suite and its views of the gardens and flowing river. The elixir pays homage to the monks’ centuries-old tradition of making potions and remedies using botanicals. This monastical connection continues at the hotel’s brand new Floating Spa. Located on a custom-made river barge moored alongside the hotel gardens, The Floating Spa has three treatment rooms and draws inspiration from the monks’ homemade botanical tinctures and celebrates a time when apothecaries would use barges to ship medicinal herbs up and down the bustling River Thames. A host of five-star facials and massages are on offer, and homemade elixirs are stored in a collection of wonderful bell jars at the spa’s ‘Elixir Bar’ – the on-river setting only serves to increase the blissfully soporific vibe.

Retaining a wonderfully natural, meadow-like feel, the hotel’s flower beds are sown with cascades of wild flowers while the fresh-cut lawns extend out to the water’s edge. Wild geese saunter past and the two riverfront terraces are ideal for enjoying the tranquil surroundings, perhaps with a Monkey Island Pilsner in hand.

Across the small main lawn, guests can explore the hotel’s herb garden, where botanicals are grown for the spa’s tinctures and some kitchen produce. There’s also a smokehouse, which produces some of the most delicately flavoured and delicious smoked salmon I’ve tasted. The charming tea room greenhouse will soon provide the hotel with its own signature blends, three beehives deliver the gooey honeycomb for breakfast and a chicken coop houses the hotel’s resident flock.

Guests can collect their own eggs for breakfast should they wish to and in true Monkey Island Estate style the chickens are named after the famous ladies of the property: Vicky, after Queen Victoria who used one of the island’s cottages for her lady in waiting; Maggie, after Princess Margaret who would attend the exclusive Oxfam Ball on the island during the 1960s and Alexandra, after Queen Alexandra who picnicked with King Edward on the island.

Across the small footbridge, the hotel has three country chic and beautifully restored cottages on site (there are three more in the village centre), which are perfectly suited to larger groups. As always, history is never far from hand, with one of the cottages having played host to Edward Elgar when he stayed at Monkey Island. The composer famously worked on his First Symphony and the same cottage would, decades later, also become former British Formula One racing driver Sir Stirling Moss’s home.

The island’s Pavilion is home to the hotel’s other public spaces. In the Monkey Room, original 17th Century frescos adorn the ceilings – restorers found scraps of the original paintings strewn around the property and spent eight months restoring the historic murals that may have also played a part in the naming of the island. A newly built bar and brasserie overlook the river and gardens. On the top floor, a 12-seater whisky snug and bar provides a cosy winter setting.

The brasserie, open to both hotel guests and visitors, is very reasonably priced for Bray and boasts a fantastic river locale. The alfresco waterfront terrace is a perfect spot for lunch, afternoon tea or dinner during the summer and the interior has a relaxed bistro with floor to ceiling windows and French doors that keep those river views coming. The menu celebrates local and seasonal British produce.

Dinner highlights included that house-smoked salmon, the Cornish catch of the day, and British lamb on black pudding. Breakfast is a time to savour – both the festoon of freshly baked pastries – and the surroundings – watching little motor boats pootle by as the river wakes up.

Part of Monkey Island estate’s undeniable allure is its setting and unique experience. Guests can enjoy a picnic cruise, sunset trip or pre-dinner sail aboard Dragonfly. The stunning launch can also ferry you to and from Henley – perhaps for the Regatta come summer, to Windsor for dinner or a day trip, upriver to the Roux’s legendary three Michelin-star Waterside Inn, to Marlow for lunch at Tom Kerridge’s restaurants, or to nearby Cliveden or Eton Dorney. For larger celebrations, three riverboats can be hired. On the island’s lawn, a clutch of handcrafted bespoke Shepherd’s Huts provide guests with the ultimate star-gazing experience. Take a seat by the fire pits with a blanket come nightfall, toast marshmallows at the huts’ fire pits and snuggle down with a boozy hot chocolate, looking skyward to spot the stars on a clear night.

Small touches, too, make for memorable stays. When we returned to our suite after dark, two miniature flower pots filled with velvety ganache and chocolate soil were left as extra treats, together with a parting gift of a packet of wildflower seeds – to help us recreate that Monkey Island ambience at home. And our turndown service was accompanied with another embossed card, this time with a quote by ex-resident Edward Elgar, and was left with a sprig of fresh lavender and deep sleep pillow spray.

Whether fascinated by history or in search of a luxury escape a stone’s throw from the capital, Windsor and Marlow, Monkey Island Estate has stories and offerings in abundance. The added bonus of having Bray’s exceptional foodie hotspots on the doorstep –  Heston Blumenthal’s three Michelin-star Fat Duck sits in the centre of the village alongside his one Michelin-star coaching inn The Hind’s Head – means there’s even more reason to extend a stay.