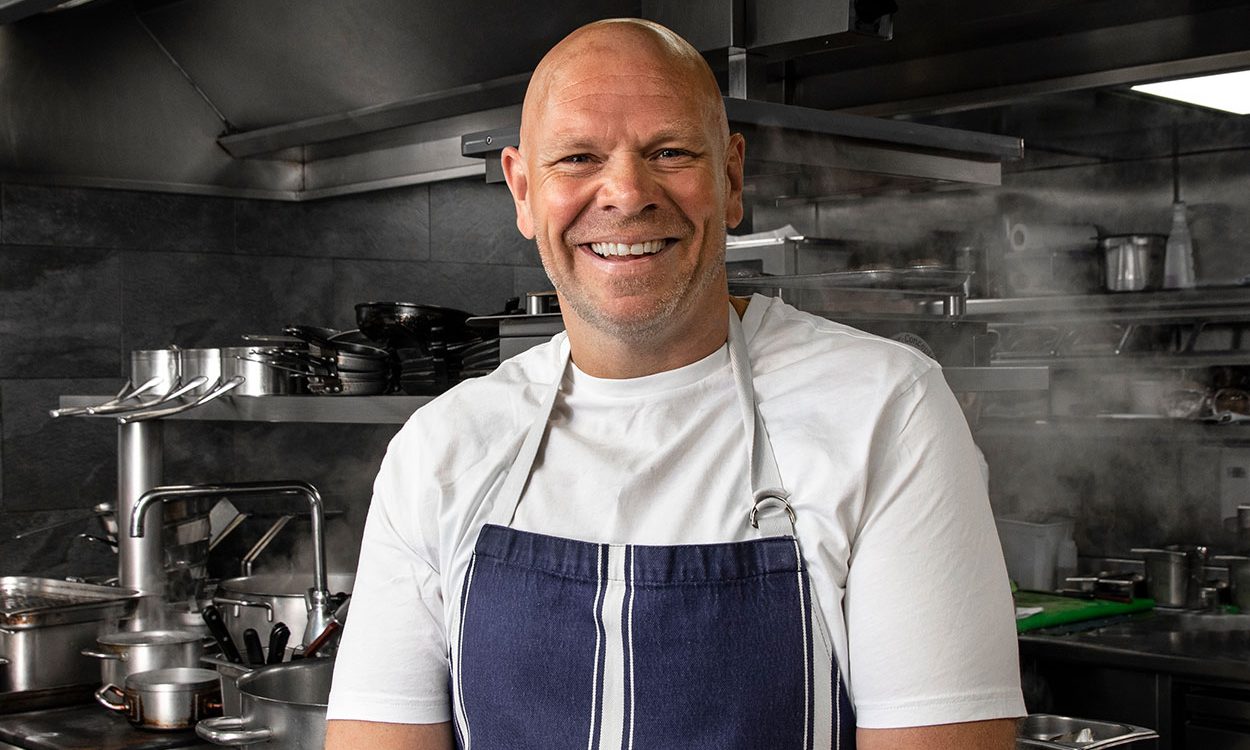 Owner of the first pub to win two Michelin stars, Tom Kerridge reflects on his stratospheric success and his exciting new launch of Kerridge’s Fish & Chips in Harrods.

The restaurant trade is not for the fainthearted – any business owner emerging from the last couple of years will attest to this – but Michelin chef Tom Kerridge has never been averse to seizing an opportunity and rolling the dice. In 2005, Kerridge and his artist wife Beth bought a rundown pub in Marlow, Buckinghamshire, and invested every penny they had in the business. The gamble paid off, and then some – within 10 months The Hand & Flowers won its first Michelin star and it’s been one of Britain’s finest gastronomic flag bearers ever since. “It was a real case of just grabbing an opportunity and running with it. Working with your other half is amazing. Sometimes it’s very hard to know the boundaries between your work life and home life – it all becomes a bit of a melting pot – but you’re both driven to create something fantastic and exciting, and it’s amazing because you achieve things together as a team.”

In 2012, The Hand & Flowers won its second Michelin star, making it the first gastropub to receive two stars in Michelin history. “I think the second star was even bigger because we had constantly reinvested in the business, the company and the people. We got rooms on board (Kerridge has cottages and luxurious bedrooms dotted around the charming town of Marlow for rental) and we just tried to get better every day. We didn’t expect to win two stars. It’s such a monumental achievement for anyone to win two, but for us to do it in a pub and being the first pub to do it, was just mind-blowing. Every year when it maintains that level, it’s like winning it all over again.”

Tom says his cooking is honest with menu inspirations often taking one dish – even if intrinsically very simple – “and doing it the very best it can be done”. It’s a recipe that has worked wonders, with the Michelin guide inclusion for The Hand & Flowers reading: “Food is based around pub classics, but those classics are elevated to new heights and are among the best in the UK. The sourcing of ingredients is given due reverence and execution is skilful and confident, while the dishes themselves are characterised by rich, powerful flavours – and the presentation is first-rate. Desserts are a real highlight and you’ll always find a soufflé on the list.”

Of his ethos, Kerridge says: “A lot of people sometimes are intimidated by Michelin stars or Michelin-star experience, but we want people to enjoy it and love it. Of course, feel that there’s something very special there, but without them feeling that they’re on edge. For us it’s all about encompassing and embracing everybody.”

The success of The Hand & Flowers has led to some delectable offshoots. Tom now has two further pubs in Marlow where he lives with his family; The Coach which opened in 2014 and won a Michelin star in 2017, and The Butcher’s Tap – Kerridge’s traditional butchers’ shop that serves the highest quality meat prepared by expert butchers, which also opened in 2017. “Marlow is home. It’s a beautiful place and so easy for heading in and out of London,” the chef says.

“Working with your other half is amazing – you’re both driven to create something fantastic and exciting, and it’s amazing because you achieve things together as a team.”

When it comes to new ventures, Kerridge has zoned in on venues of historical note. He opened his first London restaurant Kerridge’s Bar & Grill at the Corinthia Hotel in 2018 and then went on to open his Manchester restaurant The Bull & Bear in 2019 at the new Stock Exchange Hotel.

Born and raised in Gloucestershire, it was a combination of luck and necessity that led him into the hospitality trade, aged 18. “I needed some money, so I went to wash up in a kitchen when I was 18, and I just fell in love with the industry. I fell for the energy – the excitement, the late nights, and the early mornings. After all the routine of school, there was something so exciting about it all. The nine to five, Monday to Friday was never going to have been for me.”

Kerridge went to culinary school in Cheltenham and worked in country houses and hotels across Gloucestershire as a junior chef before moving to London in his early 20s to work with the likes of Philip Britton, Gary Rhodes and Steven Bull.

“You can get influenced more by people who sometimes you don’t work with – like big names in the industry, great French chefs and fantastic people like Marco Pierre White; his White Heat cookery book has been amazing for many chefs my age. But I suppose one person in my career who stands out is Gary Rhodes. Having spent time working with Gary, the godfather of British cuisine, is special.”

“I fell for the energy – the excitement, the late nights, and the early mornings… the nine to five, Monday to Friday was never going to have been for me”

Kerridge’s food continues to be honest, true to its roots and more often than not a celebration of Britain, which makes his latest opening – Kerridge’s Fish & Chips in Harrods, in the historic Grade-II-listed Dining Hall – an even better fit.

Launched in summer 2021, the sociable, laidback food hall has booths and a bar, with a menu that includes freshly caught turbot, lobster, Rock oysters, Cornish squid, and Dublin Bay prawns, along with joyously British sides of pease pudding, and snacks of chip shop pickled onions, cockle ‘popcorn’ with malted beer vinegar, Morecambe Bay shrimps and treacle bread. Kerridge adds: “It’s a massive celebration of British food in such a magical shop. The dishes include incredible lobster, oysters and freshly caught fish from some of the best suppliers in Britain and beyond. They are all cooked to perfection and served with sensational sides, such as the triple-cooked chips topped with an option of Matson curry sauce, Lobster Thermidor, Morecambe Bay Shrimps or Caviar – it’s an unbeatable combination.

“Everyone remembers trips to Harrods as a kid. I remember going with my grandparents and walking around with my mouth wide open thinking how magical it was – and how special to now be able to serve our food there. We see it as a great place to represent Great Britain and the food that we do.”

The king of elevating British classics, Kerridge notes his fish-and-chip dishes as some of his favourites from across his menus: “Fish and chips appears on all of the restaurants at some point, in some style, so that’s something that represents us really well, I think.

There’s a smoked haddock omelette that’s on the starters at The Hand & Flowers that has been there pretty much from the beginning, which is another dish we are really proud of.”

Despite the challenging last 18 months, it’s buoying to see a chef still as enamoured with his kitchens and his craft. “It’s not a job, it’s a way of life and it’s what I fell in love with all those years ago. The energy, the chaotic hours, the enthusiasm.”

When he does take a break, he retreats to Cornwall, where best friend and top chef Paul Ainsworth has his famous restaurant No6, alongside Caffè Rojano, The Mariners Public House, Mahé Cookery School and Chef’s Table, with rooms at Ainsworth’s Padstow Townhouse. “He’s down in Padstow in Cornwall and Paul’s got rooms at the Padstow Townhouse and his restaurant No6 is just fantastic so we love going down there.”

Humble, down to earth and authentic – true of both the dishes and the chef – Kerridge has no plans for further named expansions and so continues to lead from the front and keep food at the core of all that he does.