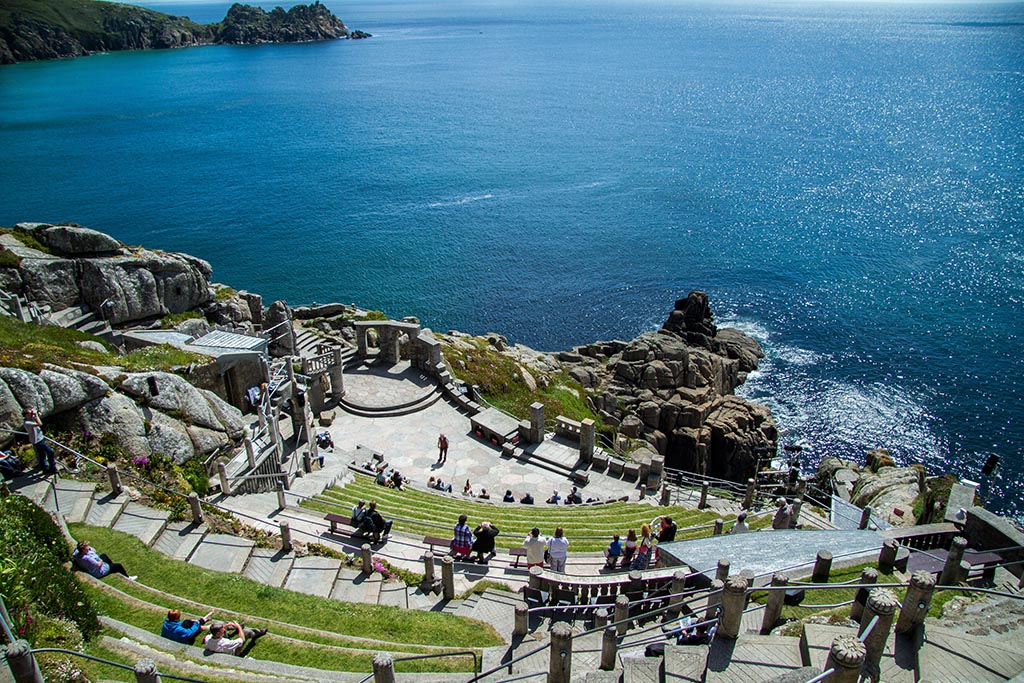 From cliff tops to abbey ruins, witness world-class open-air theatre this Summer at a range of iconic British locations what could be more enchanting than witnessing live theatre set within one of the country’s most beautiful backdrops? Rugged cliff tops, sandy beaches, lidos, palace lawns, ancient abbey ruins and grand country houses – all play host to critically acclaimed, award-winning theatre over the summer. Ideal for all the family, simply bring a picnic and blanket, then relax in comfort with a glass of wine, while the troupe entertain you as the sun sets.

Outdoor theatre brings you much closer to the action – crashing waves and occasional downpours only add to the drama, as the actors respond to heckles from seagulls or sheep. Countless productions pop up at jaw-dropping locations across the UK, offering everything from Shakespeare to slapstick, sometimes both at once. Perhaps unsurprisingly, A Midsummer Night’s Dream is a popular choice, with an array of interpretations to be experienced.

What’s more, the admission price will often include pre-show entry to the garden or country house hosting the event. We challenge you to find a better way to spend a summer’s evening. So unpack your hamper, get comfy and let the show begin!

Arguably the Holy Grail of British outdoor theatre, you’ll be hard pushed to find a more dramatic setting to stage a performance (pictured above). Literally perched on a cliff edge above the Atlantic in far west Cornwall, the Minack resembles the ruin of an ancient Greek amphitheatre. Though an entirely modern creation fashioned largely out of concrete, its story is no less fascinating. A gloriously eccentric lady, Rowena Cade, bought the remote headland for a mere £100 in the 1920s, and swiftly organised a production of (yes) A Midsummer Night’s Dream. Following its success, Rowena sought a more permanent stage, and so in the early 1930s began to build the amphitheatre herself, enlisting the help of two gardeners. The Minack staged its first official performance, The Tempest, to glowing national reviews in 1932. Rowena continued adding to the theatre throughout her life and could often be seen hand mixing concrete well into her 80s. Now, almost 90 years on from its first performance, the theatre continues to thrive, with a varied summer programme including Romeo & Juliet and Great Expectations.

Spectacular, world-class theatre staged in a beautiful Royal Park in the heart of the capital. If that sounds tempting, then you’re in luck. Just minutes from Baker Street station, Regent’s Park Open Air Theatre offers the calibre of productions you would expect in the most prestigious West End theatres, only in a stunning outdoor setting. This summer offers a vibrant programme, with extended runs of the English National Opera’s Hansel and Gretel, A Midsummer Night’s Dream, as well as the Andrew Lloyd Webber and Tim Rice classic, Evita. As with the venue itself, these lavish, large-scale productions are designed to dazzle. Regardless of your show of choice, it’s bound to be a spectacle at Regent’s Park. There are also special relaxed, captioned and audio description performances on select dates to help enrich the experience if required.

Where better to witness ‘the Scottish Play’ than in the grounds of the historic Scottish castle that actually inspired it? Glamis Castle is a real feast for the senses. With a thousand-year history dating back to the real Macbeth, the current building is largely a seventeenth century creation, complete with imposing parapets and turrets. The Ancestral seat of the Earl and Countess of Strathmore and Kinghorne, Glamis is both the Queen Mother’s childhood home and birthplace of her daughter, Princess Margaret. On 16th July, The Three Inch Fools, a troupe of five actors and musicians take on two Shakespeare productions in the grounds. Sit back and enjoy an evening of Much Ado About Nothing and Macbeth itself (matinee performance). To get into the spirit, you can even take the ‘Macbeth Trail’ in the grounds.

But, with no disrespect intended to the Bard, the real story of Glamis is perhaps even more intriguing. The castle’s colourful history encompasses several shady characters inducing the ‘Monster of Glamis’, Earl Beardie who played cards with the Devil, and the ‘White Lady’ – an apparition for whom a seat in the chapel still remains reserved to this day.

Another fantastic touring company is Illyria, which The Telegraph has rightly labeled ‘top notch outdoor theatre’. Wherever you find yourself across Britain this summer, you have a fairly good chance of catching a performance. Illyria will be popping up throughout Scotland, Wales and England in some truly wonderful locations. Fulham Palace, Glastonbury Abbey, Sandford Parks Lido, Arundel Castle, The Lake District, Gordon Castle Walled Garden (Scotland), Drum Castle (Scotland) – the list goes on. This year’s programme really does have something for everyone, with performances of Ali Baba and the Forty Thieves, Shakespeare’s The Tempest and Mary Shelley’s Frankenstein bound to set the country alight.

Miracle Theatre, Across the South West

Of course, a stunning venue is something to behold in itself, but it’s the touring companies putting on the shows that really make them come alive. A prime example is Cornwall’s Miracle Theatre, which celebrates its 40th anniversary this year with a tour of A Perfect World from June to August across the South West. The Minack is just one of many staggering and unusual venues where you can witness the action, from beaches to gardens. Some others include a Neolithic henge in Dorset (Maumbury Rings); a subtropical garden amphitheatre by the Helford River (Trebah); a cliff overlooking the Jurassic Coast (Kimmeridge Bay); various locations on the Isles of Scilly; and several Cornish castles (Bude, Launceston, Restormel and St Mawes). To make the St Mawes Castle performance even more memorable, indulge in the ‘Showboat’ package, taking a specially charted ferry from neighbouring Falmouth.

On a smaller scale, though no less enchanting, is Smallhythe Place in Tenterden, Kent. In fact its intimate setting only adds to its charm. Managed by the National Trust, Smallhythe Place is a beautifully preserved timber-framed cottage, perhaps dating from the late fourteenth century. It was once home to the eminent Victorian Shakespearian actress Ellen Terry, and her daughter created the ‘Barn Theatre’ in the seventeenth century thatched barn in her honour. Still going strong today, it is complemented by several open-air performances in the beautifully-kept gardens. The Winter’s Tale is probably the last thing you’d expect to see in the height of summer, but this adaptation of Shakespeare’s classic by Changeling (13th July) is one not to miss, with the intriguing promise of ‘just a hint of ABBA’ surely worth investigation alone. Other summer open-air performances include Alice in Wonderland (7th August) and Sense and Sensibility (15th August). Arrive early to enjoy a pre-show evening picnic in the gardens.

Smallhythe Place is but one of countless National Trust properties nationwide, from the grand to the snug, that regularly hosts open-air performances. Whether you hanker for a classic such as Wuthering Heights, or perhaps something a little more contemporary like Gangsta Granny, you’re well catered for. Many, such as Scotney Castle, offer a VIP theatre experience, which includes a welcome drink, as well as a mezze platter to sup on and a tub of artisan ice cream for the interval – all to be enjoyed in style and comfort in the VIP area. What’s more, children are welcome and under-fives go free. Why not experience Austen as it should be, in the grounds of a grand stately home like Attingham Park in Shrewsbury; or laugh along to Wind in the Willows in a country pile worthy of Toad Hall. Visit the National Trust website to find a performance near you.

Coincidentally, in the very same year that the Minack began its journey in 1932, a similar story was unfolding at a seaside resort at the other end of the country. The natural amphitheatre at Scarborough’s Northstead Manor Gardens proved the perfect setting for staging outdoor performances. Today, the colossal Scarborough Open Air Theatre is supposedly the largest in Europe. (The record attendance in former years is said to be around 11,000). The football pitch sized stage, which has accommodated up to 200 performers at once, is built upon an artificial island set into a lake – a feature often incorporated into performances. This summer the venue is hosting big pop act, from Kylie Minogue to Madness. But for theatre lovers who particularly enjoy a good musical, there’s the West End Proms (5th July). See the real stars of the West End and Broadway perform the stage hits backed by a 32-piece orchestra. Whether you’re a fan of Phantom of Opera, Les Miserable or The Greatest Showman, there’s something for you.