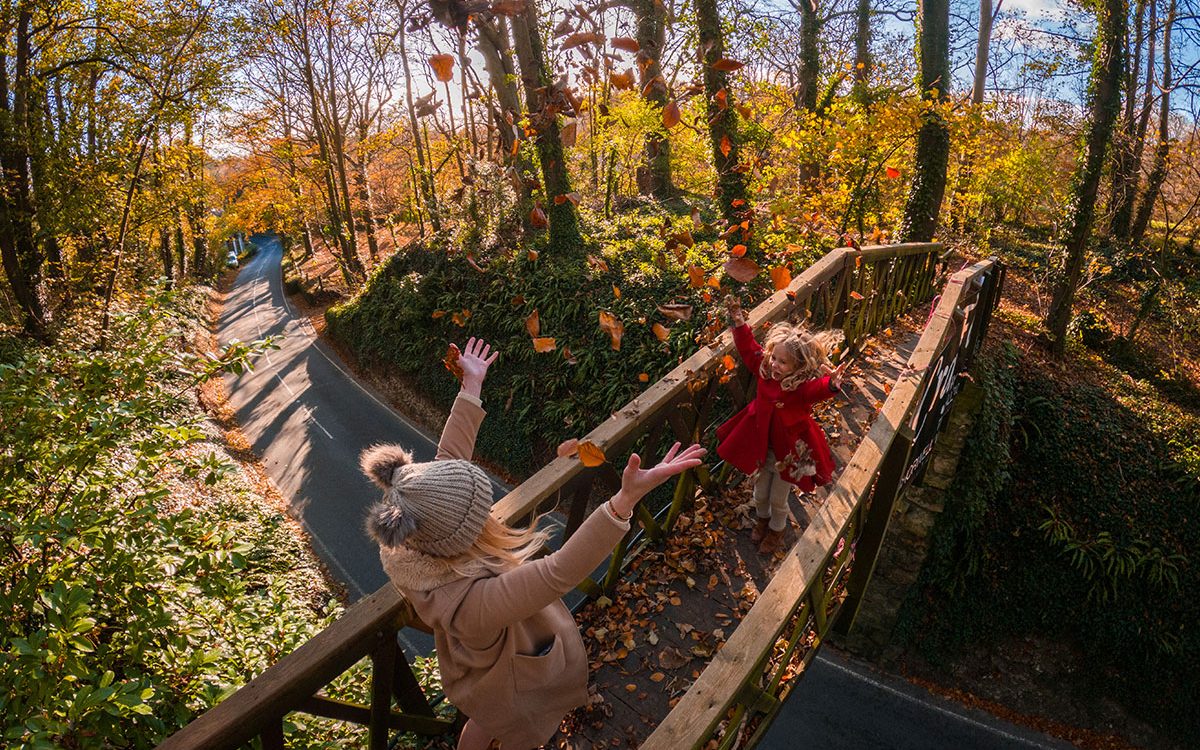 One of the most accessible islands off the coast of Britain, with 60 miles of dramatic Heritage Coastline, plus hundreds of miles of signposted footpaths, the Isle of Wight is a paradise for outdoor enthusiasts and adventurers dreaming of their next getaway. With so many reasons to visit during the months of autumn and winter this is a perfect time to say yes to a spontaneous Isle of Wight adventure!

Say Yes to beautiful wildlife and the natural world

The Isle of Wight is an Area of Outstanding Natural Beauty with miles upon miles of stunning coastline and beaches to explore, there are hidden coves and pretty walking trails, unspoiled landscape, clear waters and thriving wildlife. The landscape is in fact so special that it has even been acknowledged one of the very few places in the UK to be accredited as a UNESCO Biosphere Reserve. In autumn the birds migrate so don’t forget your binoculars and a flask of tea and head to Newtown National Nature Reserve or the Red Squirrel Trail where you may spot a few foraging for their winter stores.

Say Yes to the great outdoors and fresh air

The Isle of Wight has a milder climate than the rest of the UK, so even at this time of year you still might still want to pack your favourite t-shirt. In fact, the Island recently won the enviable accolade as the sunniest destination in the country! So pop on your walking boots and join one of the guided walks or embark on a self-guided trail. There are many routes to choose from including those that follow in the footsteps of famous people with connections to the Island, ranging from Alfred Lord Tennyson to Jimi Hendrix. Once there simply pop into the Visitor Information Centre in Newport for maps, walking trails and more – there’s even electric bike hire available here for those who might prefer some pedal power to get around the island. Cycling routes include off road bridleways and purpose made tracks on former railway lines, and over 200 miles of cycle routes to enjoy.

The award-winning beaches of Shanklin, Sandown and Ventnor are idyllic spots with bustling esplanades, and glorious beaches of Ryde and Appley have vast expanses of golden sand with views out to the Solent. And, did you know the Isle of Wight is one of the best places in Europe to find fossils? This is an island full of surprises – regarded as the most important site for prehistoric finds and the third most important in the world – bring a bucket and join a guided walk with Dinosaur Isle Museum in Sandown.

Thrill seekers can power through the waves on a stand-up paddle board or go on a kayaking expedition around the rugged coastline, discovering rocky inlets and entering hidden smugglers’ caves. For a truly unforgettable breathtaking moment join a paddle experience at the most westerly tip of the Island around the famous Needles rocks. This row of three distinctive chalk stacks rise dramatically out of the sea and there’s a lighthouse dating back to 1859. For those who prefer sightseeing by land rather than on the water there’s a chairlift at the Needles Landmark Attraction that ascends to the top where you can enjoy far-reaching coastal views. Other adrenaline-fueled activities include paragliding, kayaking, horse riding, canoeing, paddleboarding, coasteering, wild swimming and even tree climbing.

When hunger bites, whether you are in search of hearty traditional pub grub or more contemporary cuisine, the Isle of Wight has an abundance of fantastic eateries, award-winning restaurants, bars and independent cafes and tearooms. Home to many artisan producers who produce exceptional quality food and drink  it is easy to indulge your taste buds with the finest in-season game and meat, vegetables and fruits. During the winter season there are many decorated cosy snugs, open fires and warm festive drinks to get you into the Christmas spirit too.  Drop into the Crab & Lobster Inn in Bembridge or The Highdown Inn Totland Bay.

Treat yourself to a night under the stars, the Milky Way, Cassiopeia, Orion and the Plough can all be seen from the Isle of Wight’s unpolluted skies – away from the bright lights of the mainland. You might even enjoy a visit to the Island Planetarium at Fort Victoria for a stargazing weekend and to see a show in the Astrodome 360 Star Theatre.

There are lots of special places to end your day with an incredible sunset view. Some of the best spots on the Island are Gurnard beach, Colwell Bay, Totland Beach, Headon Warren, Yarmouth, across the harbour from the harbour wall at Yarmouth, and looking west from the Pepperpot. With sunset taking place much earlier than during the summer months, you’ll have plenty of time to absorb the celestial haven around you in the autumnal skies.

Take the kids for a Halloween style Frights and Sprites Night, Pick your own Pumpkin from a farm, travel with Wizards onboard a steam train, or enjoy a live Mariachi band and neon lights at The Festival of the Dead! The little ones will love helping to save Santa’s Sleigh at Christmas at Tapnell Farm Park from 26 November to 24 December. Plus, don’t miss the Island’s first ever Fairlee Fireworks at Newport’s festival site, North Fairlee Farm, on the 5 Nov 2022. There is a packed schedule of things to do in the autumn and winter months – this is an Island that really does have something for everyone.

Say Yes to your next autumn break

Whatever you decide to do and however you’re travelling, it couldn’t be easier to get to the Isle of Wight – just two hours south west of London by train, followed by a ten-minute hovercraft ride from Portsmouth to the Island. Car and passenger ferries connect the Island from Southampton, Lymington and Portsmouth.