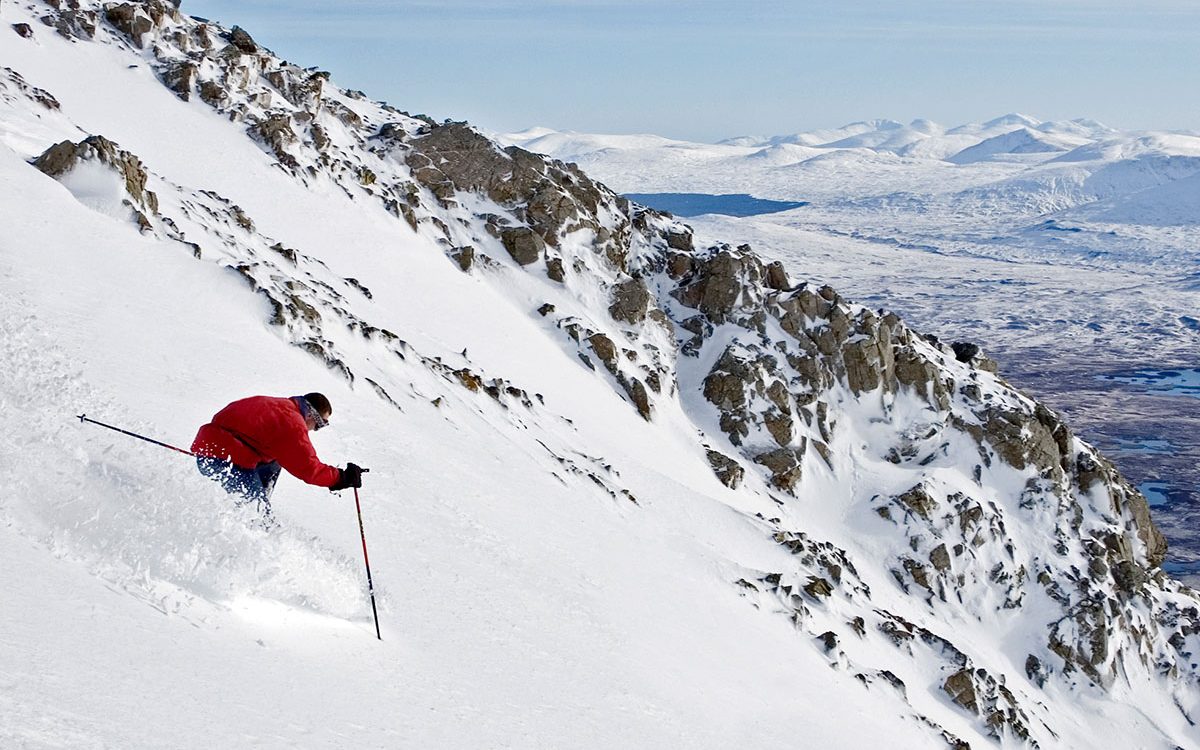 Skiing in the Highlands

Clean crisp air, breathtaking views of peaks and pines, miles of pure white snow – and you don’t have to leave the UK…

In recent years, there have been around 250,000 ‘skier days’ a season in Scotland, so it’s a – deservedly – popular winter pastime. But if you’re not into skiing, or the snow is a no-show, high in the mountains is still a great place to be, with lots to do. Even in skiing-mad Switzerland, a third of winter visitors aren’t there to ski… The Scottish skiing season runs from December through to early April, although the snow conditions are usually best from January onward. Scotland has five ski resorts: Glenshee, the largest; Glencoe, the oldest, with the longest and steepest runs; Lecht, the quietest; Cairngorm Mountain Resort, the most popular; and Nevis Range Mountain Resort, near Britain’s highest mountain, Ben Nevis. All offer ski and snowboard tuition, in groups or solo, and you can hire all the kit you’ll need. The wintry scenery is stunning, with lochs and forests at lower altitudes often unblanketed by snow, and for non-skiers (or when the weather isn’t being cooperative), there are lots of other no-snow activities within easy reach of wherever you’re based. The total length of all available ski runs, at over 83 miles, is lower than you’d find at many individual resorts in the Alps or North America, so there’s less variety, but for a short stay the Scottish slopes give foreign resorts a run for their money. Snow conditions can be unpredictable, so stay flexible, keep your eye on the snow situation and weather forecast (visitscotland.com), and perhaps be prepared to go at short notice.

The Glenshee Ski Centre resort is set in set in spectacular mountain scenery in Perthshire at the eastern end of the highest Cairngorm peaks.

The name Glenshee means ‘fairy glen’ and the area is sometimes called ‘The Three Glens’ as a nod to the massive ski area in France known as ‘Les Trois Vallées’. Access is via the A93, the UK’s highest public road.

Informal skiing started here in the 1930s, and today the UK’s biggest lift system extends across three valleys and four mountains – with a summit elevation of 3,504 feet. For beginners, access is easy, with extensive nursery slopes by the main car park. Intermediates have 36 runs to choose from, from the expansive pistes of the Thunderbowl and sheltered routes of Coire Fionn and Glas Maol to the bumps, jumps and natural half-pipe of Meall Odhar and the slalom course at Cairnwell. Experienced skiers should try the mogul-strewn Tiger black run.

For ski-free family fun, swoosh downhill on a sledge, or consider ‘bagging a Munro’. There are 24 ‘Munros’ – mountains over 3,000 feet – here, named after Sir Hugh Munro, who compiled the first list of such peaks, totalling 282, in 1891. ‘Munro bagging’ means walking up one of them. Several whisky distilleries are within easy reach, or sample craft gins at Persie Distillery.

Make your base in Braemar in the heart of the Cairngorms National Park, near Balmoral Castle, with two castles of its own, and the driving trail to see another 15. The town is home to the renowned annual Braemar Gathering, with pipe bands, Highland dancing and tossing of the caber. Accommodation ranges from cheery log cabins to a grand Victorian shooting lodge. Or for splendid self-catering seclusion, stay in Glenbeag Moutain Lodges: Scandi-style log cabins with outdoor hot tubs and saunas.

Perhaps best known, at least to Scots, as the site of the 1692 massacre of MacDonald clan members by government forces they’d taken into their homes, the spectacular, brooding scenery of the Glencoe Valley, sculpted by an ancient volcano, has been seen on screen many times, in films including Braveheart, Harry Potter and Skyfall.

It is Scotland’s oldest ski resort, with commercial skiing starting here in 1956, and also home to the country’s longest black run, Flypaper, at 2.6 miles, which is also the steepest. Its highest point is 3,635 feet, giving impressive views of Rannoch Moor and the sharply peaked Buachaille Etive Mor mountain.

Midway up the mountain there’s a natural bowl with a large plateau area, and the upper reaches have some superb runs, including the famous Flypaper. And for the kids there are igloo-building and snowman-building competitions for World Snow Day and Snow Fest.

“No matter what time of year you visit, and whether deep in the glen or high on the moor, Glencoe’s wildlife can be as spectacular as its mountains.”

Stay on-site in the snug tubular Microlodges, or in the village of Glencoe itself, 11 miles from the ski resort, beside Loch Leven, at the mouth of the valley, in charming lochside hotels and welcoming guesthouses.

Around the village are walks to suit all abilities, or spend a day in Fort William, on the shore of Loch Linnhe, known as the outdoor capital of the UK, with its sandy beaches, castles and distilleries. You could even scale the 4,413-foot Ben Nevis – and no matter what time of year you visit, and whether deep in the glen or high on the moor, Glencoe’s wildlife can be as spectacular as its mountains.

Situated in the heart of Cairngorm National Park, on the country’s sixth-highest mountain, the resort has 31 runs (13 green, 10 blue, six red, two black), accessed by 12 lifts, and two cafés – one café is the UK’s highest.

Views from the top, 4,0484 feet, are spectacular, with the peaks of the surrounding mountain range and Loch Morlich glistening below. The 1.2-mile funicular railway, the UK’s highest, runs from the base station to Ptarmigan, the top station at 3,599 feet. It has been closed since 2018 but is being repaired and set to reopen in winter 2022. Another record-holder is the UK’s highest red phone box, still fully operational.

Stay in and around the popular holiday resort of Aviemore, just 11 miles away, which plays host to the Scottish Freestyle Ski and Snowboard Championships every March, with everything from luxury hotels, B&Bs or cottages to rent or, for a more rural location, there are cosy wooden lodges at Badaguish Outdoor Centre in Glenmore, at the foot of the Cairngorms, surrounded by centuries old pine forest.

Aviemore makes an excellent base for exploring the wild reaches of the Cairngorms National Park, especially for spotting some of the native wildlife, such as eagles, capercaillie and osprey. And how about mingling with Britain’s only free-ranging reindeer herd at the Cairngorm Reindeer Centre at nearby Glenmore? Treat yourself to a trip on the Strathspey Steam Railway on a heritage steam locomotive, with afternoon tea en route. Or travel here by train aboard the Caledonian Sleeper, the overnight service from London, which stops in Aviemore.

Get your skates on

For more frozen fun, skating on seasonal ice rinks is a much-loved activity that’s now become part of the run-up to Christmas. The pandemic is still affecting future events; please check details before you go.

London’s most glamorous rink, set in the 18th-century courtyard of this working arts centre and exhibition space, open all day and into the evening.

With the former royal pleasure palace as its impressive backdrop, this rink is powered by wind and solar energy.

Glide around this city-centre rink with the award-winning science centre as a backdrop.

Instead of going round and round a rink, follow the ice walk in the shadow of Cardiff Castle.