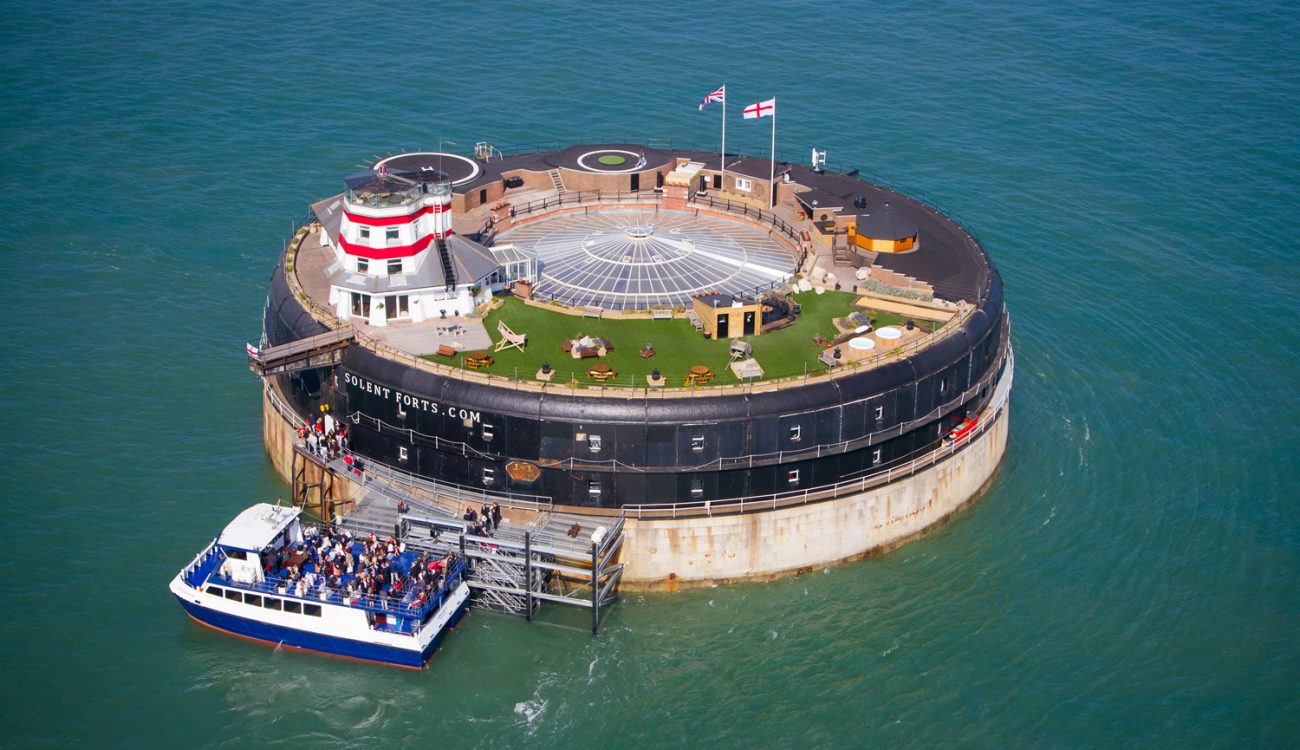 Solent Forts an amazing visit off the Hampshire coast

With all the imagination, ingenuity and wealth of Victorian Britain, the possibility of invasion, by sea, from across the English Channel was viewed not as a threat but as an opportunity to demonstrate the resolve of the residents of these British Isles. Long before they became friends and allies through the ‘Entente Cordiale’, the French and the British had, for centuries, vied for European and, through colonisation, global superiority. This enmity did not cease in 1815, with the great Battle of Waterloo, and, fifty years later, it appeared that another conflict was likely. Protecting the great naval base at Portsmouth was seen as crucially important and five great fortresses were built, along the overlooking hills, to defend the city from land invasion. Access from the sea could not be more than ‘discouraged’ by batteries on the coast and the Isle of Wight and, to be certain of security, a series of artificial, heavily-fortified islands were created in the murky waters of the Solent, that lively stretch of water between Hampshire and the Island. So were born the Solent Forts, called Spitbank, No Man’s and Horse Sand. However, by the time they were completed, the French aggression had been distracted by another European neighbour and the forts were no longer required. Collectively, the buildings became known, unkindly, as ‘Palmerston’s Follies’, and never fired a shot in anger until the Luftwaffe threatened Portsmouth.

After decades of neglect, after WWII, the Forts were acquired by the imaginative hotel chain, Amazing Venues, with the intention of creating unique recreational destinations and they have achieved this – magnificently. Horse Sand remains a ‘work in progress’, currently delayed by the presence of a resident family of peregrine falcons, but the 9-suite Spitbank and its bigger sister, the 22-suite No Man’s, are spectacularly open for business, whether overnight stays, corporate events or weddings. Events for up to 200 guests (60 on Spitbank) can be accommodated, during the day, but most would have to leave on the last boat. While both are accessed by water-taxis from Gunwharf Quays, the larger fort also has a helipad, ideal for grand arrivals and making a lasting impression. More facilities, including a Lazerquest in the basement, have been installed on No Man’s as more of the original construction had been lost, over the years of dereliction. Spitbank, largely undamaged, has been protected from inappropriate development by its status, equivalent to that of Stonehenge, as a Scheduled Ancient Monument and the designers have been scrupulously careful to preserve, in situ, all the fitments that demonstrate the purpose for which it was intended.

The series of great cannon embrasures, even without the cannon, still have, in the vaulted, exposed brickwork, the stout hoops and hooks by means of which they would have been restrained and reloaded and hammock-hooks for the gunners. In the same zone, but facing towards the inner courtyard, smaller areas have been separated off by timber walls and re-designated Guards-, Comms- and Wash-rooms, all suitably furnished. The whole section is warmly and comfortably presented as the Nelson Lounge, the perfect place to meet your fellow-guests and while away a stormy night, on the same level as the nine spacious, and immaculate, en-suite guest-suites and conveniently close to the ‘Officers’ Mess’ (dining-room) where the most sumptuous dinners and substantial breakfasts are served. On the upper levels are the hot-tub, the sauna and all manner of relaxation areas for fishing, reclining or just sea- or sunset-watching. Importantly, there is also the ‘Crow’s Nest’, a fully-glazed bar for the lunchtime buffet and associated refreshment, including specially-brewed Spit Beer – much better-tasting than it sounds! Pure, fresh water is still drawn from the Victorian’ artesian well and power is provided by the modern, diesel generator. In the lower reaches of Spitbank, completely unchanged and unspoilt, are spooky reminders of the purpose for which the fort was built, the great magazines for storing ammunition, the machinery for hoisting shells up to the guns, the blast chambers and narrow escape-hatches and passages – all eerily quiet, as though only recently evacuated.

Deservedly popular for exclusive-use bookings, the Forts are certainly not forbidding to visit as a couple. Almost inevitably, you will be drawn into the convivial atmosphere created by being a part of a small group, each of whose members is experiencing the same sense of remoteness, away from the real world, and coming to terms with the inevitability that, once the last boat has left, this 150 year-old fortress is your secure sanctuary. Not only that, but the remoteness, the quietness (even the gulls seem subdued) and the ability to leave the world behind make for a perfect exercise in E.R.T. – Enforced Relaxation Therapy. Even for the most jaded, and world-weary, hotel visitor the Solent Forts experience is totally unlike any other – and in a very good way!

Getting away from it all is paramount to our wellbeing. Showing this to be true, is this exclusive life-affirming Cotswolds retreat that is currently a […]

10 of the best UK country escapes with a difference

From magical bubble domes to gothic Georgian gate houses, a water tower to a converted train carriage, here’s our selection of some of the latest […]

In search of an idyllic private island with magical charm, blessed with exotic plants, translucent seas and endless amounts of golden sand? Spend your days […]