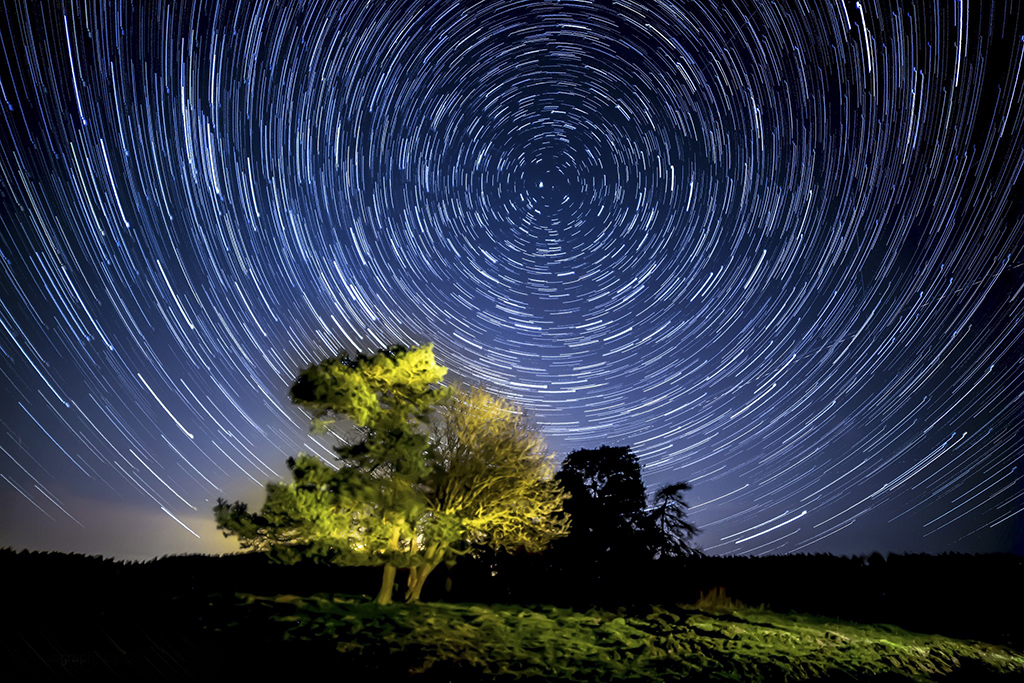 Stargazing dark is the night

As winter descends, and we instinctively hunker down in our homes, it’s easy to forget about the world outside. But one stargazing winter festival is determined to ensure we don’t forget to look out – and up. Emma Johnson explores the world of the Dark Skies…

The darker the sky, the more you can see; the blacker the night, the brighter the moon.” So starts the poem by Yorkshire poet Ian McMillan, commissioned in 2017 to write a poem that captured the essence of the Dark Skies Festival. His beautiful verse – entitled ‘Of Darker Skies and Lighter Thinking’ – speaks to a culture of busy people, too caught up in their own lives to see the beauty around them. McMillan likens the darkening skies to a map of the heavens, the wonders of time and space stretching out for us to see, and reminds us all to take a moment to remember how special the natural world can be.

Now entering its sixth year, the Dark Skies Festival encourages people to look up, showing visitors that you don’t have to travel far to find a spot where you can look up at a pristine sky and stand in awe of the amazing array of stars shining above you.

Organised in conjunction with the Yorkshire Dales and North York Moors National Park, with Northumberland and South Downs joining in later years, the festival started in 2015 as way to encourage people, and children, to spend more time outdoors during the February half-term. The festival has grown exponentially each year since, with over 100 events and more than 7000 people attending everything from after-dark runs, talks and crafting sessions to the 50-mile off-road cycling race, True Grit, through the North York Moors, as well as starlight safaris and fine-dining events.

Recent years have seen several other National Parks added to the Dark Skies programme, while an army of volunteers and businesses are now involved with staging events throughout autumn and winter.As areas of designated low light pollution, National Parks are some of the best places for spotting constellations, shooting stars and other cosmic happenings. In an urban area you will be lucky to see 20 stars on a clear night whereas in an area of low light pollution you could see as many as 2,000.

This time of year is also the best for stargazing. Longer nights and clear skies, coupled with weaker light from the moon during autumn, and winter, means the inky black skies reflect even the smallest stars. In February 2020, the festival will also coincide with a new moon meaning the possibility for extraordinary lunar views.

There are some 88 constellations of the Northern and Southern Hemispheres, as well as planets, to be spotted during this time. Richard Darn, an astronomer and Dark Skies Hunter with the festival explains that this time of year is dominated by the winter constellation of Orion, which is unmistakable with its hourglass shape. “In Greek mythology this is Orion the hunter,” explains Darn. “The top lefthand star called Betelgeuse looks orange to the naked eye and is a giant star near the end of its life. The three central belt stars are particularly distinctive and may – or may not! – have been the template for the line-up of the pyramids at Giza.” Darn also reminds us to look out for the wonderful sphinx-like profile of Leo toward the end of the winter season.

While there are numerous great places for stargazing across each of the four protected landscapes involved in the festival, some spots deserve particular mention, including those which have been designated as Dark Sky Discovery Sites where it’s possible to see the Milky Way under the naked eye and are well-worth a special visit on a clear night. (see list and links below)

DARK SKY DISCOVERY SITES – Where to see the Milky Way

One of the best ways to enjoy the Dark Skies is with a stargazing safari in the company of an astronomer, in places as diverse as Malham Cove or outside Tan Hill Inn, the highest pub in Britain. In the North York Moors, popular astronomy sessions are held deep in Dalby Forest, on a coastal cliff top or in the grounds of Castle Howard, with the stately home acting as a backdrop. In addition, you could also go canoeing on Scar House Reservoir in Nidderdale under a canopy of stars or try a yoga and mindfulness session from Adventures for the Soul at Great Fryup Dale in the North York Moors with a dark skies walk afterwards in the company of an astronomer.

In the South Downs, open evenings at various observatories allow you to see the stars, planets and moon through some of the country’s largest, and most powerful telescopes, while you can also take guided tours of the celestial wonders which are on view during the winter months, including Taurus and the Pleiades. Other events include a hike under the stars up to Beacon Hill and stargazing evenings in Lewes, Petersfield, Arundel and Midhurst, while on 19 February you can enjoy a ‘star party’ on Brighton Seafront, or join the wildlife in Petworth Deer Park for an evening of moongazing with the astronomer John Mason from the South Downs planetarium.

As the festival has grown, many businesses have been inspired to get involved too, meaning you can now do anything from night zip-wiring at Go Ape in Dalby Forest to visiting the pop-up planetarium on Hidden Horizons tours throughout the dark sky season. There are also several popular night photography courses; Gaze and Graze evenings at local eateries and destinations, which match astronomy with fine-dining and a backdrop of stars, as well as nocturnal wildlife sessions and opportunities to see how artists interpret the dark skies.

Family astronomy is a big focus for the entire event, and there are several theatrical and scientific displays that children will love. Star Seekers in the South Downs is a unique theatre experience for children, while the Little Star show is a starlit display designed to delight babies aged 6 – 18 months.

In Yorkshire, early evening events include several sessions with experts who can point out some of the most well-known constellations, while children can also join a ghost walk through the atmospheric fishing village of Robin Hood’s Bay, accompany rangers and guides out into the countryside to watch nocturnal wildlife or head to the National Centre for Birds of Prey near Helmsley to watch owls in flight.

There is a wealth of natural wonders to explore this winter, with many events entirely free and many others that will expand your mind and open your eyes a world above our heads, showing how easy it is to enjoy the cosmos without leaving planet Earth. As Ian McMillan reminds us: “The inky sea is waiting; the night boat sets sail.

SOAK UP THE ATMOSPHERE STAY WITH A LOCAL NIGHT SKY ENTHUSIAST

Embrace the beauty of the skies

Cawthorne House, Pickering
This lovely B&B will take guests into Dalby Forest for a stargazing session armed with a powerful telescope, flask of hot chocolate, blankets and deck chairs. £180 for a two night stay per couple.

Carr House Farm, Ampleforth
Stargazing fans, Anna and Jack will gladly provide guests with chairs, stargazing guides, red light torches, blankets and bacon sandwiches if they want to spend an evening outside. £100 per room per night based on two people sharing.