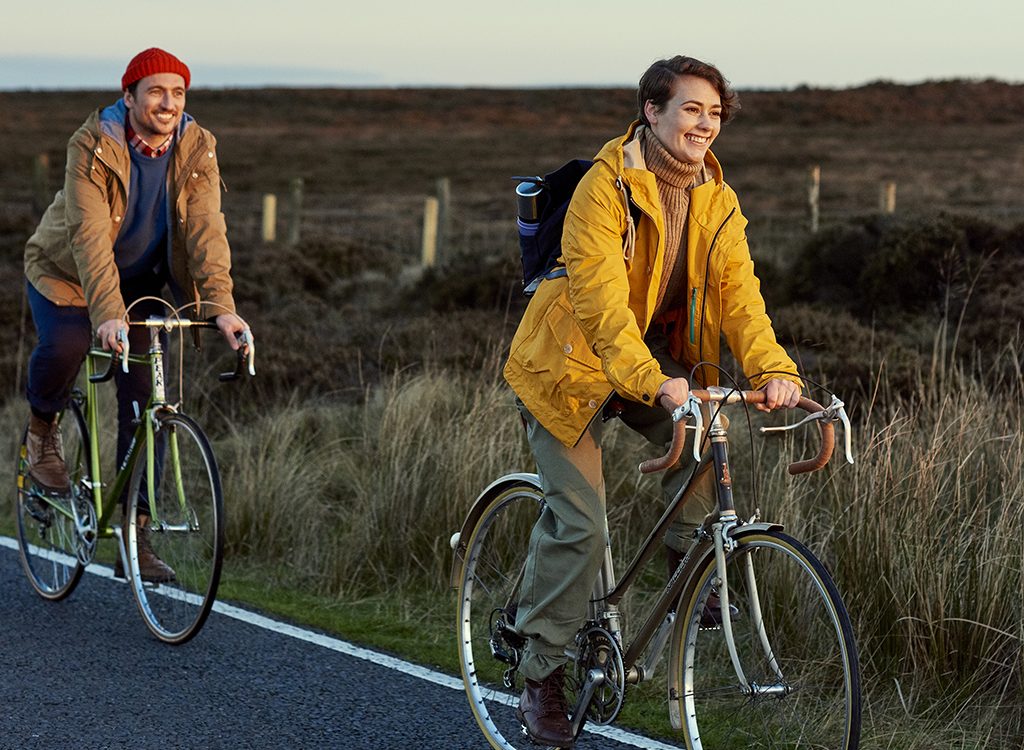 Find amazing rail trails in the UK. Walk or cycle along a former railway line. Taking to a former railway line trail makes for an easy-to-follow route that’s easy on the legs, whether you’re walking or cycling. That’s because you can rely on them to be reasonably level (as trains struggle with steep gradients) with no stiles to negotiate, which makes it possible to walk the dog or push a pram. They’re well marked, and dotted alongside are cycle-hire centres, pubs, cafés, picnic areas and artworks. You’ll see traces of the stations they used to serve along the way – like platforms, signal-boxes and ancient rolling stock – as you go along, over and through embankments, cuttings, viaducts, bridges and tunnels. There are over 100 ‘rail trails’ in the UK, stretching for over 10,000 miles, and some of them are dauntingly lengthy – but you don’t have to take on the challenge of completing an entire route from end to end; you can opt for a shorter section. Here’s six of the best…

Linking the cathedral city of Canterbury to the arty seaside town of Whitstable, the seven-and-a-half-mile route follows the world’s first passenger railway line, which opened in 1830. As well as people, it carried seafood inland, hence the line’s nickname.

Mainly flat, the trail passes through a university campus, open fields and the ancient woodlands of Blean Woods nature reserve, before bringing you through Whitstable’s back streets onto the shingly shore and the town’s bustling harbour, with its fishing fleet and artisan makers’ market stalls – and the chance to sample seafood such as Whitstable’s famous native oysters.

Based on the former Lincoln to Boston Railway Line, the path follows the river Witham through the marshy Fens with their dykes and drainage channels. The full route is 33 miles, with around nine on quiet roads.

Its apt name, which won a competition, comes from the elusive water rail bird. Expect wide skies and expansive views, particularly from the specially designed viewing platforms which offer impressive vistas across the wide-open flat fens or towards Lincoln Cathedral’s square spires.

As well as several former station buildings, at Southrey and Stixwould, even the cast-iron station signs can be seen on still-standing platforms. A highlight of the rail trail is the imaginative sculpture trail along the way, featuring works based on local sheep, cow and pig breeds, or inspired by the surrounding environment, all themed on local poet Alfred Lord Tennyson’s quote: ‘I am part of all that I have met’.

Acclaimed as one of the best walks in Wales, this is a favourite of former Ramblers president Julia Bradbury. Start the nine-and-a-half-mile route on a tree-lined trail from the stone-built town of Dolgellau, set beneath Cadr Idris in Snowdonia National Park. As the path itself is flat, it’s a relaxing way to admire the decidedly hilly scenery all around. At Penmaenpool by an original wooden toll bridge, a signal box is now a bird hide, and signals still stand beside the former tracks. Stop off for refreshments in the former station, now the George III pub. The river, and its valley, widens out and laps at the stone-built embankment of the trackbed. Finally, cross the half-mile railway bridge that spans the estuary, where Cambrian Coast line trains still run, into the sandy seaside resort of Barmouth.

Completed in 1830, the Cromford and High Peak Railway was one of the world’s first, built to transport minerals between two canals. Nowadays, the 17-mile route runs between Dowlow, south of Buxton to High Peak Junction, Cromford, linking in with a whole network of converted railway lines.

Set in the stunning scenery of the Derbyshire Dales, with trackside dry-stone walls and rocky outcrops, it has unusually steep sections, where wagons were pulled up by steam-powered beam engines using cables. (The official advice today is not to cycle down these sections!) High by name and high by nature (up to 1,266 feet), the path’s elevation above sea level makes for wild and windswept views over the limestone landscape of the Peak District, particularly at the northern end. The southern end is rich in relics of this industrial heritage, including engine houses (Middleton Top engine house is open to the public), rusting machinery, pulley wheels, remains of winch houses, and old wagons.

Skirting the Cairngorm mountain range, home to five of the UK’s six highest peaks, the Way runs for 65 miles from the winter sports hotspot of Aviemore to the coastal town of Buckie. Its route runs alongside the river Spey, a favourite haunt of salmon – and tweed-clad anglers – following the track of the former great North of Scotland Railway between Boat of Garten and Dufftown, which was primarily used for transporting whisky from the distilleries beside the river, many of which are open for tasting tours. For real rail enthusiasts, there’s an opportunity to do a round trip with a steam train on the Strathspey Railway, between Aviemore and Broomhill.

Follow the former Somerset and Dorset Railway through city, country and canalside settings on this 13-mile circular route rail trail. Take in superb views of Bath’s curving Georgian crescents, before plunging beneath the city through the Devonshire Tunnel, just a quarter of a mile long. Next is Combe Down, the longest cycling tunnel in Europe, at just over a mile, with a subterranean son-et-lumière show. Beyond is Midford Castle, an 18th-century folly (owned by actor Nicolas Cage for a couple of years). After the pretty village of Monkton Combe comes the towpath of the narrow Somerset Coal Canal, joining the Kennet & Avon Canal at the imposing Dundas Aqueduct, now a Scheduled Ancient Monument, dizzyingly high above the river Avon. Back in Bath, the Greenway passes through the heart of the city, over Pulteney Bridge and beside the Avon back to the start.

Walking tour in the city of Bristol

From the imposing heights of Clifton Gorge down to this city’s lovely reclaimed harbours, Bristol is a beautiful Georgian port full of energy and colour. […]

The Most Scenic Touring Routes in Britain and Ireland

With more than 50 touring routes to discover, you’re never far away from a scenic adventure. Ease up on the accelerator and lace up your […]