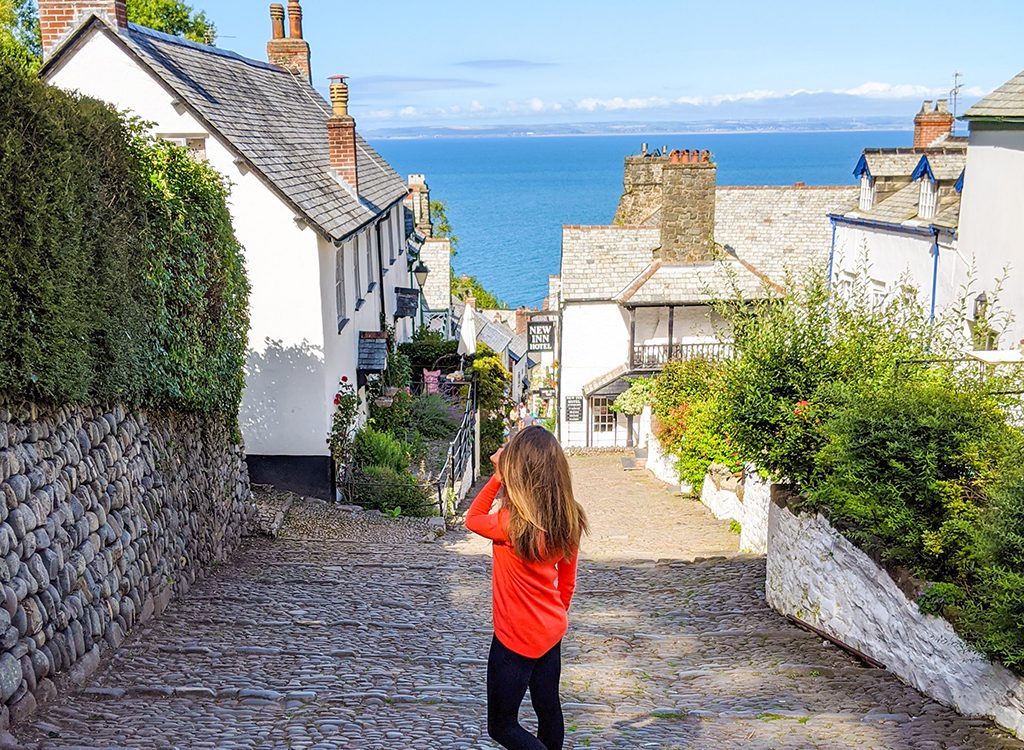 Clovelly the UK’s most Instagrammable village

Recently named as ‘the most instagrammable village in the UK’, British Travel Journal’s Editor checks in at the new Sail Loft harbour suites in Clovelly to discover more about this stunning North Devon village.

I am going to be honest, even if a little embarrasing to admit, that yes, it was one of the 134,353 Instagram captures, giving Clovelly its title as the UK’s most Instagrammable village, which inspired me to visit for the first time.

Seeing the extraordinary view of the famous cobbled street, built of stones from the beach, know as ‘Up-a-long’ or ‘Down-a-long’, with a glistening sea and inviting blue sky in the vista – this was more than enough to tempt me.

I soon discovered, however, that as wonderful as this well-acclaimed snapshot might be, it’s not the only reason for visiting Clovelly – in fact, there are many more incredible highlights just waiting to be discovered in this little village.

Most incredibly, Clovelly is very special in that it has been privately owned, managed and preserved by the same family since 1738. There is a small community of around 400 residents (known as the cobblers) who rent their picture-perfect houses from the family’s Clovelly Estate Company, and together, they run the village.

There are no holiday homes allowed and no option to buy. However together with the owners, the residents look after the village and enjoy living in it just as it would have been in the mid 19th century – making this one of the most unique, famous and beautiful villages in the world.

Properties in the village do not become available very often, but when they do, potential newcomers are interviewed, as they must have a skill or business attribute where they are able to personally contribute to the community if they are going to live there. All residents are expected to join some of the village groups and take an active and supportive role in village life.

If you are born living on the cobbles however (a cobbler baby) then you are exempt from this interview process – instead, you will be given priority status on rental opportunities when looking for a home of your own.

This exceptional sense of community spirit gives Clovelly its unrivalled charm – the tour guides, restaurant staff, museum workers to the local fisherman, everyone’s a team, living and working together on the cobbles – and this includes entire families who have lived in the village for generations.

Take the Perham family, for example, one of the oldest families in Clovelly – they have been cobblers now for six generations. Artist siblings Rachel and Stephen (Perham) follow in their Mother’s tradition of painting on pebbles, their naïve and folk art paintings are displays of Clovelly as they see it through their eyes today.

For day visitors to the village, there is a modest admission charge, which includes parking, an informative video on Clovelly’s history in the Visitor Centre, the museums in the village, and free admission to Clovelly Court Gardens. The profits made from this charge, the pubs, hotels, restaurants and shops, are invested straight back into preserving the village. And that comes at an eye-watering price!

Just the upkeep of the stonework in the village has cost the Clovelly Estate Company over £76,000 in the last few years, upkeep of the Harbour wall and quay around £50,000, and over £200,000 on exterior decorations alone.

For day visitors the large Visitor Centre offers plenty of parking spaces at the top of the hill. From here it is a short downhill walk to the top of the high street, passing the donkey stables and craft workshops of pottery, silk and soap (don’t miss watching the skilled craftsmen at work in the converted stable-yard), before tumbling its way all the way down to the ancient fishing harbour and 14th Century quay.

Clinging to a 400-foot cliff, once you are in the village, there is no traffic, just donkeys and man-powered sledges to transport all goods, from groceries to furniture. Donkeys used to be the main form of transport for centuries, but now they are mainly seen giving children rides around their meadow during the summer or posing for photographs in the street.

It is a joy to gently meander your way past the whitewashed cottages lining the streets, while navigating the passageways and winding lanes that lead off to further picturesque treasures.

It is as if the illustrations from your favourite childhood book of the most beautiful village you could possibly imagine comes to life around you. The purring cats greet you from the doorsteps of their homes, beautifully decorated with blooming flowerbeds, pastel-colours and ornamental shells. Children play without a care in the world, carrying with them crab buckets, bodyboards and just the smell of sweet roses.

It is no wonder with all this magic in the air that Clovelly has so many literary and artist connections; Charles Kingsley lived here, Charles Dickens wrote about it, William Turner painted it and Rex Whistler featured it in much of his work too.

In the village, you can visit the Kingsley Museum where you’ll see Charles sitting at his desk in his study composing a letter to his bride-to-be. There’s also the Fisherman’s Cottage, where you can see how a Clovelly fisherman and his family lived in the 1930s.

You could easily spend the entire day exploring the village shops, museums, pubs and picturesque harbour, and when hunger calls there are several options of restaurants and bars.

Stop off for a famous Devon Cream Tea at Hamlyn’s, located in the New Inn, a magnificently beam-hung room featuring a portrait of Christine Hamlyn in her wedding dress. Or for delicious home-cooked pub grub while watching the world go by there’s  the beer garden at the Upalong Bar, outside at the back of the Inn. You might also enjoy walking in the footsteps of Lily James with a visit to the Snug, as seen in The Guernsey Literary And Potato Peel Pie Society, with views looking out across the harbour and bay.

Fresh fish, crabs and lobster land on the quay at Clovelly daily – straight off local boats into the Harbour Restaurant, so sampling some of their famous Clovelly lobsters is an absolute must.

The Harbour Restaurant is open for dinner every evening with stunning views across the quay and harbour.

For those who do not want to walk back up, there is a fare-paying Land Rover service for much of the year to return you to the top of the village.

Back at the top is where you will discover a true gem in the village – one that is often be overlooked by visitors. Clovelly Court Gardens, located adjacent to the 13th Century parish church of All Saints, is a perfect example of a real working Victorian kitchen garden.

The gardens are a contrast to the rest of the village, protected from the winds and bounded by an avenue of lofty lime trees, bordered by herbaceous beds, which in summer are a blaze of colour. Several blissful hours could be spent admiring its splendid herbaceous borders and magnificently restored Victorian glasshouses. In the run of glasshouses, you will find apricots, peaches, nectarines, melons, grapes, lemons and figs, ripening in the warmth, along with cucumbers, peppers, chillies, aubergines – and a tropical Abutilon.

Outside there are apples, pears, quinces, medlars, soft fruit, and two mulberry trees – and even Chinese gooseberries. The Red Lion and the New Inn at Clovelly are both supplied with the fruit and vegetable produce from the gardens.

There are two hotels, the 400 year old New Inn, in the heart of the village and the 18th Century Red Lion on the quay, or Hamlyn’s hostel – a simple no-frills bed and breakfast opposite the New Inn.

The bedrooms are stylishly decorated, and you just can’t beat the spectacular sea and harbour views. The private guest parking offers you the unique opportunity to enjoy the harbour and the village before, during and after-hours from the day visitors, and of course access to the harbour by car (rather than on foot). The evenings in Clovelly have a very different feel. Calm and serene, the village reverts back to a peaceful village of residents.υ

A romantic boat trip to Lundy: Lundy (Norse for island of puffins) lies twelve miles off the coast from Clovelly. This three and a half mile-long granite outcrop sits on the edge of the Atlantic Ocean, with nothing but sea between it and North America, three thousand miles away. You can book a trip there from the  Quay at Clovelly

Join in the fun: Time your visit and experience one of the annual festivals including the “Seaweed Festival” in June, “Maritime Festival” in July, “Lobster and Crab Feast” in September and the “Herring Festival” in November

Discover the latest hotels this summer, we tell you where to look. Hare and Hounds, Berkshire They’ve had a lot of fun playing on the […]