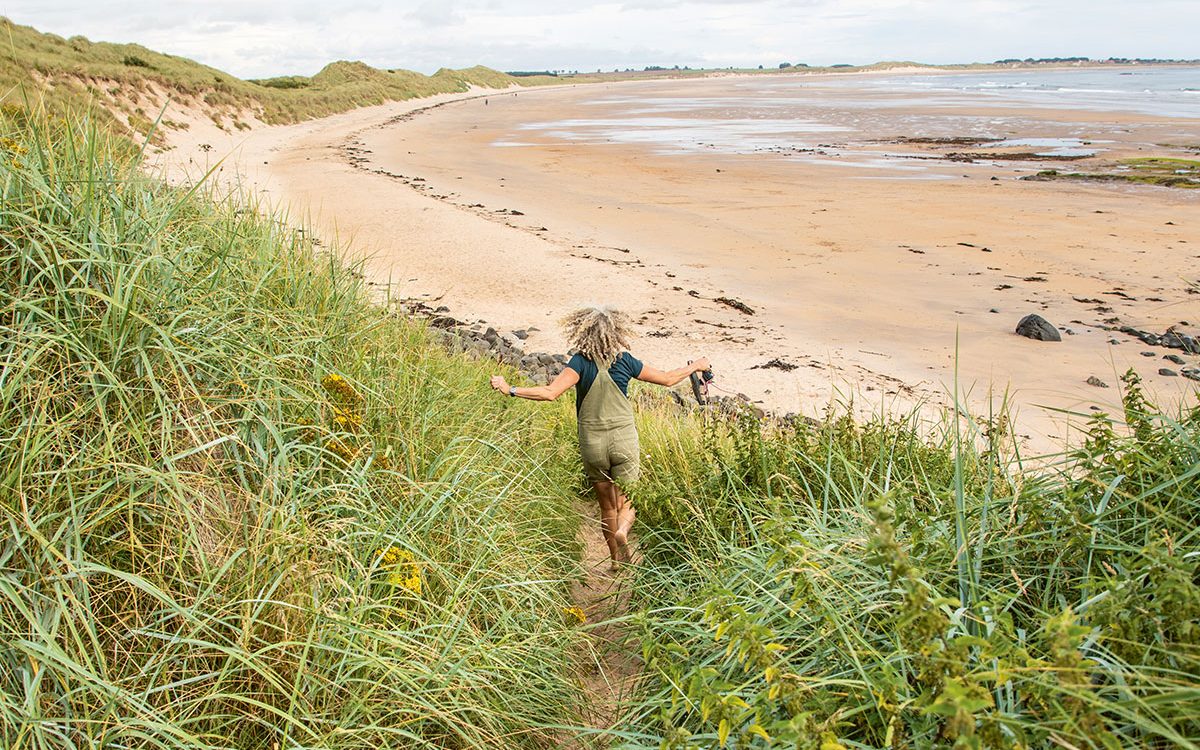 Author Martin Dorey headed north in search of solitude on a road trip to England’s least-populated county and a coastline that’s beautiful and often overlooked. Between the summer crowds he found just what he was looking for and more. And that can only mean one thing: a bracing dip in the North Sea.

We parked the van at Beadnell Bay, a long, sandy bay to the south of Seahouses, in a little car park behind the dunes. We were looking for solitude, in a year when solitude was hard to find; seeking out the kind of places where most people don’t go.

I wanted to prove that it is still possible to get ‘off the beaten track’ in England in 2021, the year we all stayed at home. Happily, it is. Northumberland, by many standards, is one of those places where the majority of people don’t go. It has the lowest population density of any English county and remains resolutely off the radar for many, despite a coastline that’s sparsely populated, rugged, diverse and often achingly beautiful. Between the hotspots of Holy Island, Bamburgh, Seahouses and Amble, there is still plenty of space, especially when you compare it to other places: Northumberland welcomed 10 million visitors in 2018 compared with 47 million for the Lake District (on the wetter, western side of England). The county might not have the lakes or the mountains but it more than makes up for it with castles, ancient sites, beaches, puffins and dark skies. And did I mention the beaches? A drive up the coast from Whitley Bay to Berwick will take you to them all. Give yourself time and dawdle.

Lizzy took off her shoes to walk through the dunes to the beach. It was a warm day, with thin, wispy cloud and little wind.

When we emerged from the tall marram grasses we looked out at a low-tide beach with maybe three or four people on it. Most of them were walking. Lizzy led me off to the south to show me a beach she had wanted to explore.

We let the coast path take us around a low headland of rocks, across cool, still-damp sand, and through more marram, to another small arc of beach with a rocky reef in the middle and points on either side. Below the tideline, and between the rocks, flat sand.

The beach was deserted, save for a few gulls pecking at seaweed. A couple walked along the coast path, away from us and around to the next bay. A few small waves broke on the sand in a small clean swell.

If ever there was a time to embrace the North Sea this was it. The water, though chilly, was bearable. I blew out as I submerged to avoid the risk of cold-water shock – something to remember – and allowed my breathing to slow back to normal.

The beach was gently shelving so it took us a while to get deep enough to dive in and swim. My skin fizzed as I got used to the cold and swam a few strokes out into the bay.

We swam a little more and then, once back in our dry clothes, walked back up the beach hand in hand, feeling the warmth from the sun on our backs. With the beach to ourselves it was a good sign we were, truly, off the beaten track, especially considering it was August.

This experience was the peak of my time exploring the Northumberland coast: I loved the wildness and the fact that, with a little effort, we could find a slice of heaven to ourselves. That’s a rare quality. And it made me feel truly alive and happy at a time when so much was uncertain.

I have been to Northumberland in the depths of winter and found it to be beguiling even then. But in summer it was truly lovely. We surfed on a tiny beach behind the railway lines near Cocklawburn while a few walkers trudged up the sands and a woman played in the waves with her children. We bought kippers in Craster. We strolled through Amble. We got ‘that picture’ of Bamburgh Castle reflected in the shimmering shallows.

We strolled on empty sands and swam in empty seas. We cycled in Kielder Forest and got completely lost in the vast nothing of the Otterburn Ranges. What more could you ask of a road trip?

When it came to visiting Holy Island – the hugely popular island of Lindisfarne – we employed a tactic divulged to us by a fellow camper: he waited for a day with a midday high tide. This meant that any visitors to the island would have been cut off all day by the tidal causeway, unable to return to the mainland until the water receded in the evening. Waiting on the mainland for the tide to ebb away, he drove across to Lindisfarne when everyone else was leaving. It worked for us too. We arrived at about six o’clock on a clear, sunny evening. Sure enough, idling on the island side, we found a queue of cars.

As they streamed off the island, we cruised on, enjoying a quiet evening of spiritual wandering as the sun set.

Our final stop, Berwick, was as surprising as the rest of it. We found the lovely beach at Spittal by accident while trying to find the (brilliantly located) Caravan and Motorhome Club Site. It is a quiet, sandy beach, backed by beautiful, elegant stone houses and terraces of neat cottages. Some had gardens that led onto the promenade. Bound by the railway and cliffs, Spittal is a dead end kept quiet by a lack of through traffic. I fell in love with its wide, quiet streets straight away. There were probably no more than 20 people on the sand. It passed the ‘I could live here’ test. And that’s a big ask: I live in Cornwall.

Sadly, Berwick was as far as we’d get on this trip. It didn’t really matter that we’d stopped short of Scotland.

Northumberland was wild enough without heading for the NC500, the Trossachs or the Outer Hebrides.

And with all the driving we’d save, there was always time for one last cool swim. Breathe out as you submerge.

Check it out on the way

The home of the Craster Kipper is a must! Go early. Parking is easier – and pick up a freshly smoked kipper from the quayside. There’s a great coastal walk to Dunstanburgh Castle too.

There are many good reasons to amble around the fishing town of Amble. The harbour village prides itself on being the ‘friendliest port in England’, and its annual puffin festival, brightly coloured beach huts and seafood shacks are just a few of its quirks.

Stunning castle on a bend in the river, owned by the National Trust. View the awe-inspiring keep as you wander around the nearly intact circuit of towered wall.

Off the Beaten Track: England and Wales

Off the Beaten Track: England and Wales is a book about getting away from it all. Martin drove the length and breadth of England and Wales to find places that are forgotten, overlooked or simply dropped off the map. With sections on how to do it the hard way or the easy way, Martin kayaked the Tweed, hiked river valleys to the sea, cycled up mountains and fished remote wilderness lakes in search of that rarest of commodities: solitude. Did he find it? You bet he did.

Martin Dorey is the author of Off the Beaten Track: England and Wales and The Camper Van Bible: The Glovebox Edition, published by Conway and out now. Buy here

Text and Images by Martin Dorey

Embrace the nomad lifestyle with these new water friendly trainers