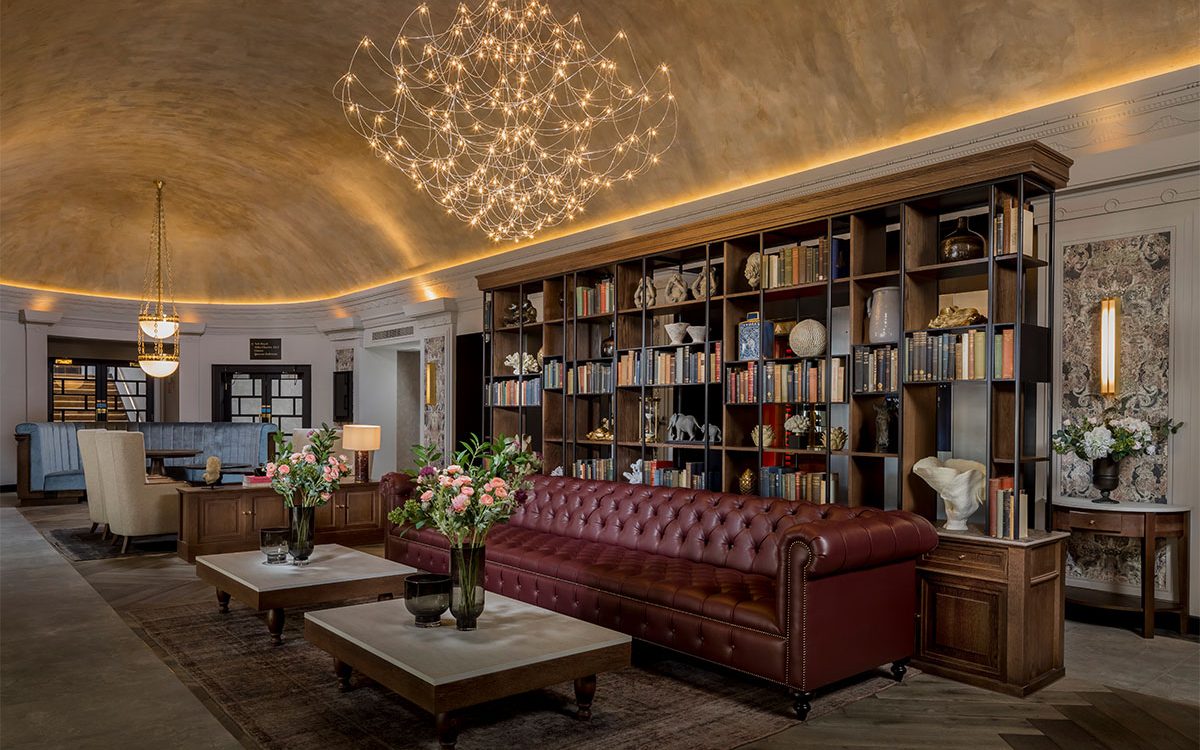 The Queens Hotel An Extravagant Refurbishment

It’s an historic landmark, an art deco hotel right next to the train station in Yorkshire’s largest town, and it’s just had a nine-month, £16-million refurbishment. Karyn Noble experiences a luxurious weekend in Leeds at The Queens Hotel and also reviews its new Grand Pacific restaurant.

I could almost count the steps from Leeds’ train station to The Queens Hotel, but even if I had, the minimal step count would’ve entirely slipped my mind when I opened the door to my room on the eighth floor. It was like walking into a turn-of-the-century film location, where I was looking directly at grand Grade-II-listed buildings from each window of my room. Before I can hang up my coat, I’m dazzled by the late afternoon winter sun glinting from the glorious lime-green patina dome atop the Corinthian columns of the former Yorkshire Banking Company building (built in 1899). I cross the glossy parquet floor to bring the other window’s view closer to me: the vast expanse of Leeds’ City Square and the classical architecture of the former General Post Office (from 1896) with its intricately designed clock tower. I wait for the director to call ‘Cut!’ on the cars spinning about the other-worldly metropolis below, where six roads meet, but there isn’t one. This is my reality. I turn from window to window, transfixed, then spot the complimentary mini-gin bottles accompanied by Valencian orange tonic water on the table. I mix my welcome cocktail into a glass adorned with slices of dehydrated orange and lime, and happily reconcile The Queen Hotel’s new-found modernity with its unique place in Leeds’ history.

First operating in 1863 as a Midland Railway hotel, the art deco Grade-II-listed, white-Portland-stone-clad building you see today was constructed in 1937 and opened by the Princess Royal. Back then, it was not just the first British hotel to have en-suite bathrooms and air-conditioning from top to bottom, The Queens Hotel was very much the place to be seen. Still today, it’s not difficult to imagine Cary Grant once lounging in the opulent lobby, Laurel and Hardy dancing about the palatial ballroom or Nelson Mandela emerging from one of the listed red elevators.

As part of its nine-month, £16-million renovation, an additional 16 bedrooms were added, bringing the total to 232 rooms, all of them completely renovated but using a similar black, white and muted grey colour palette. Select one with a ‘City Square’ view for the best outlook. The ground floor has been totally transformed as a social meeting hub, and the book-shelf-lined lobby with its mix of plush furniture, sculpture, chandeliers, and pendant hanging lights offers a striking welcome as you arrive through the revolving glass doors towards the barrel-vaulted ceiling of the reception.

Upperworth Studios and Iliard Design are responsible for the transformation, which sensitively enhances many of the hotel’s historical art deco features while seamlessly introducing modernised functionality. So much so that my initial disbelief that the red passenger elevators may be ornamental rather than functional proved unfounded.

With design inspired by Singapore’s opulent Raffles hotel, the Grand Pacific restaurant in The Queens Hotel has been kitted out by developer Living Ventures and features nods to the Golden ‘20s. My first impression at dinner is of relaxed splendour. It all feels rather exciting to be in a high-ceilinged, strikingly lit (15ft bespoke chandelier!) circular space, where palm trees loom over high-backed chairs with throne-like drama, and the décor evokes both light-hearted fun and glamour. This translates to the drinks menu, where the cocktails seem incredibly popular, thanks to the theatrical smoky arrivals from the raised bar that splits restaurant diners from drinkers in the lounge area. I sip my Yuzu Negroni while pillows of smoke waft out of domes lifted to reveal Smoked Pineapple Daiquiris or Smokey Old Fashioneds.

The food choices at dinner err on the side of comforting crowd-pleasers. I murmur ‘international cruise ship’ to myself in an attempt to describe the gamut of global influences. Indeed, the main courses are described as ‘a mesmeric voyage of tastes from distant shores’, spanning everything from Asian-Spiced Duck Cottage Pie to Tempura Szechuan Sea Bass. Yuzu makes another appearance in my dessert of crème brûlée served with macadamia shortbread. And if chocolate fondant with vanilla Ice cream and salted caramel sauce doesn’t make you happy enough, they go one step further by adding honeycomb-roasted peanuts. Everything is a dollop of ‘extra’ without being too avant-garde.

Such is the warmth of service at Grand Pacific, that I’m recognised at High Tea the next afternoon by one of the previous night’s waiters, and I already feel like a regular. I’m thrilled to sit at yet another dramatic high-backed chair, where I cocoon inside, like being in a sun-dappled protective pram. A choice of loose-leaf tea is offered with all the accoutrements, along with not one but two impressive three-tiered courses, first the savoury delicacies then the sweet treats. Let’s start with the savouries. This is no mere crusts-off cute sandwich situation (although Coronation Chicken as well as Egg and Mustard Cress sandwiches are present). Instead, think: Smoked Salmon Potato Cake, Marinated Tuna Tartare, Arancini with Goat’s Cheese, Eccles Cake with Creamy Lancashire Cheese, Crumpet with Lobster Butter). The next three-tiered course of sweet treats arrive and I become gratefully to slide deeper into my comforting throne in the face of a food coma: Hibiscus and Strawberry Trifle, S’mores Chocolate Pot, Chocolate Cupcakes, Apple and Cinnamon Scones, Pumpkin Macarons, Coconut and Lemon Tarts and Treacle Toffees. It’s a delightful way to spend an afternoon, and the Grand Pacific High Tea already appears a popular choice for celebrations and get-togethers.
Note: the hotel breakfast is not served in the Grand Pacific’s 100-cover dining room, but on a basement level of the building with more of a conference-room vibe, which feels like a missed opportunity, given the dramatics upstairs. It’s a perfunctory hot-and-cold buffet affair as well as a choice of cooked-to-order items from a short menu. If your room rate doesn’t include breakfast (you have a choice when booking), then brunching at one of the nearby cafes (see boxed text) is an excellent idea while exploring Leeds.

Where to Eat and Drink Nearby

The sheer diversity of Leeds’ food scene could rival its abundance of shopping options, which is already off-the-scale. Don’t miss our drink and dining choices, all within an easy walk of The Queens Hotel:

The Owl located within Leeds’ Kirkgate Market, opened in November 2019, and it’s quite a find. At night, you can only access it via security escort from the market’s entrance, which feels very special, as does The Owl itself. Sit at the bar downstairs with the chefs prepping right in front of you and enjoy the likes of sourdough crumpet topped with smoked cod’s roe puree and bacon jam, or take a cosy corner upstairs with a local gin or rum. Visiting during the day comes with bonus people-watching through The Owl windows to Kirkgate Market (one of the largest covered markets in Europe).
theowlleeds.co.uk; leeds.gov.uk/leedsmarkets

FINT is a wonderful choice for brunch, with a menu that caters well for vegans, in addition to being on the healthier side of usual. It opened in July 2021, having previously been known as Fettle. The setting is minimalistic Scandi (owner and head chef Simon Hawkins’ partner Kamil is half Norwegian and owns a design shop in Leeds). Do make a reservation, as it’s very popular with locals. And if it’s on the menu, don’t miss the Duck Hash: a perfectly cooked portion of duck leg with sweet peppers, Parmentier potatoes, spinach, poached egg and Béarnaise sauce.
fint-leeds.com

Stuzzi Leeds opened in February 2019, and this two-storey bar-restaurant should be first port of call for Italophiles. The carefully curated menu features the finest Italian imports (Sicilian olives, Puglian burrata) as well as ingredients from local suppliers. It also changes every few days, so, I can only dream of eating the chargrilled duck liver and pancetta skewers with negroni marmalade glaze again.
stuzzi.co.uk/leeds

HOME is the place for fine dining in Leeds, and since opening in a new location on the banks of the River Aire at Brewery Wharf in November 2021, it has only become more popular (book up to three months in advance for a table). Former MasterChef semi-finalist Elizabeth Cottam produces multicourse tasting menus (your choice of eight or ten courses), the service is impeccable and while the menu is adventurous (kudos to the Malham dessert inspired by Lockdown walks through the limestone landscapes of Yorkshire’s Malham Cove), it’s never intimidating.
homeleeds.co.uk

Nâm Sông is a Vietnamese café that opened in May 2021, bringing orange-hued joy from its gleaming walls and swinging colourful lanterns, as well as the opportunity to try Phin Filter Coffee, Bánh Mì, Pho and Bún. Sit at bar stools or cross-legged on colourful cushions on the floor and enjoy zesty, fresh and healthy flavours.
namsong.co.uk/leeds

The Lost and Found

The Lost and Found Leeds Club will bring the atmosphere if you’re ready to party. This magnificent Grade-II listed building dating back to 1820 was restored in 2018 into a restaurant, cocktail bar, boardroom, secret den, and what at times feels like an indoor forest. The cocktails are spectacular and, depending on what you choose, could arrive topped with bubbles ready for popping, explosive fireworks, or in vessels big enough to share between four people. You’ve been warned.
the-lostandfound.co.uk/restaurant/leeds-club