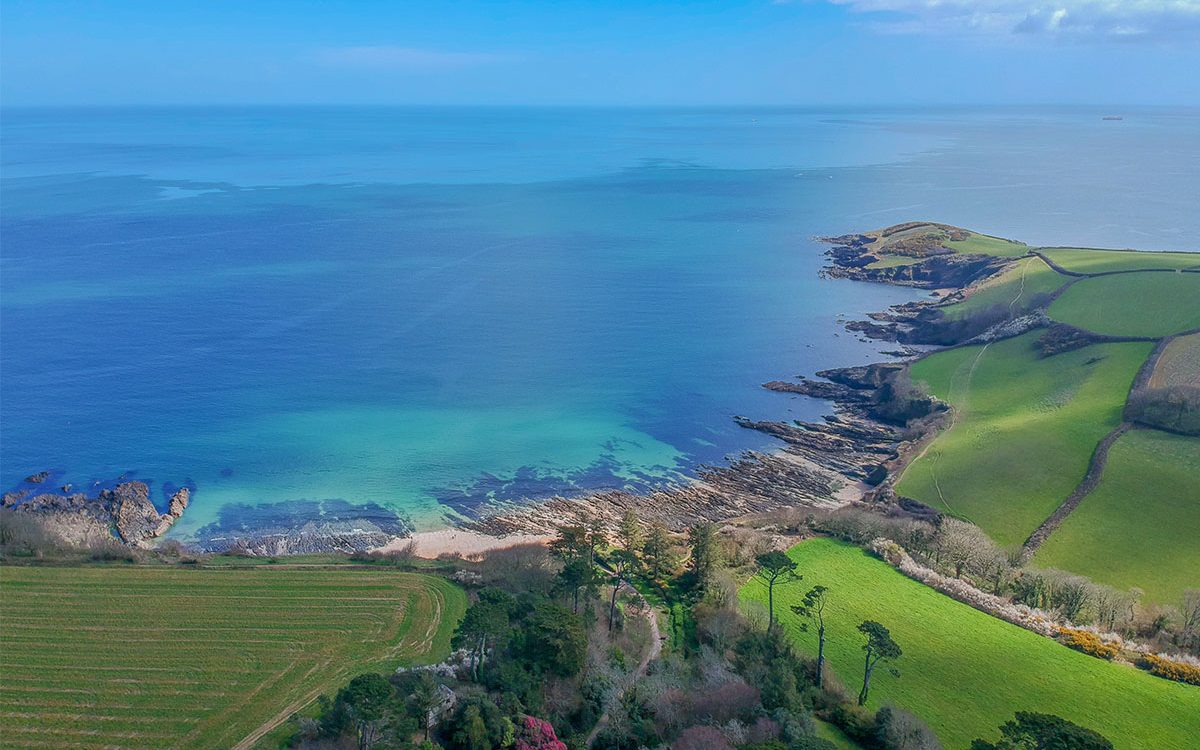 Set in subtropical gardens down a quiet country lane in a hidden corner of Cornwall, and recently re-modernised under new ownership, Hotel Meudon is a rare holiday gem with its own secluded beach, high-class cuisine and breathtaking beauty.

It is impossible not to fall in love with Hotel Meudon upon arrival – it evokes your senses; the sweet smells, popping colour and blissful ambient sounds from the unrivalled subtropical garden transcend you into another world entirely.

The glamour and tranquillity of Meudon doesn’t end there, inside you become enthralled by its eccentric charm – full of character preserved in time and never lost. The lounge-like reception area is beautifully decorated with vintage furniture, including Nelson designed pendants and Santa & Cole floor lights. With jazz music reverberating from the Drawing Room you could easily believe you’ve time warped back to the 1960s when the elegant bijou hotel first opened – and was celebrated as the most modern hotel in Cornwall – by Harry Pilgrim.

We were greeted by affable staff who took our luggage – it was too early to check-in to our room so they warmly suggested taking an early-afternoon wander down to Bream Cove, a secluded private bay nestled at the bottom of their garden. Beach towels in arms and feeling as though we didn’t have a care in the world, we meandered through the picturesque meadow of giant rhododendrons, mimosas, gunneras, camellias, Jurassic-looking tree ferns and other plant-hunter finds from around the world.

It’s a fascinating stroll, the giant rhubarbs make you feel as though you’ve entered the film set for Honey I Shrunk The Kids – each leaf reaches up to seven feet tall and stretches over, creating huge green canopies fanning out from tall, thick, spiky trunks, while the 10-metre-tall magnolia fill the valley with colour.

It is the Quakers we must thank initially for this nineacre paradise, Falmouth’s famous Fox family who owned the property back in the early 1800s. Their passion for exotic gardens set the tone and initial vision for this tropical splendour, with later generations adding their own mark. During the beginning of lockdown, new proprietors Kingfisher Resorts acquired the hotel from the Pilgrim family, who had owned the hotel for over 60 years.

The gardens might be Meudon’s jewel in the crown but the private beach cove is their best-kept-secret and the new owners have been quick off the mark to fine-tune guest experiences there – from opening The Bream Box, offering barista-style coffee and a tempting range of pastries, treats and snacks (home-made chocolate brownies are delicious!) to introducing snorkelling, stand-up-paddleboarding and kayaking with local resident Dan of Little Wolf Adventures, who describes himself as part-man, part-fish!

You also can’t beat a wild swim at Bream Cove – the crystal clear calm waters lure you in. At low tide it is possible to scramble over the rock pools to the sandy beach at Gatamala Cove and walkers can enjoy the four-mile circular walk along the South West Coast Path to Rosemullion Head and the Helford Estuary.

Feeling fabulously refreshed after our sea swim, we made our way back through Meudon Woods to the hotel where we were shown to our Large Sea View with Balcony room by General Manager, Samantha Banks. Why ‘Meudon,’ I asked? Sam explained that the name Meudon was taken from a nearby farmhouse which had been nicknamed ‘Mowi do Non’ by the Napoleonic prisoners of war who built it after their home village near Paris. This became shortened to Meudon. Then, under the new ownership ‘Meudon Hotel’ has been given a fresh modern twist and a subtle repositioning to ‘Hotel Meudon’.

And it is not only the hotel name that has been tastefully remodelled. The sympathetic refurbishments have enhanced its ’60s heyday – the original furniture has been given a new lease of life, including the Ercol chairs and tables on the bridge and a fabulous glass coffee table in the drawing room. Even the chairs in the bedrooms are the original 1960s Parker Knoll Froxfields, restored and reupholstered.

Besides the many belongings lovingly kept and restored there are some lovely modern design features too, including new bathrooms and glass balconies, while the Cornish toiletries, hanging clay tiles on the walls designed with a Cornwall crest and the beautiful bold artwork from local artist Nicola Bealing nod towards a sense of place and Cornish provenance.

On the way to dinner in the hotel’s award winning Restaurant Meudon, we spot menus hanging on the walls from some of the world’s top dining establishments – including a signed menu from El Bulli.

A bright-yellow sea bream with red human ankles and feet – specially commissioned from artist Nicola Bealing – greets you before the maître d’ takes you to your table.

Restaurant Meudon has a wonderful aura – you are made to feel special from the moment you walk in. The setting is spectacular, floor-to-ceiling windows allow the natural light to flood through to the opulent décor – think: pine parquet flooring, stylishly refurbished 1960s dining chair originals, glass chandeliers and lighting from Vistosi. Guests are seated with views overlooking the glorious Meudon gardens, and a grapevine flourishing in the conservatory brings the outside in.

I ordered baked Camembert followed by roast south coast cod and morello cherry soufflé for dessert – and savoured every extraordinary mouthful. Menus are inspired by nouvelle cuisine, with fresh fish and seafood, locally farmed meats and seasonal game, complemented by Cornwall’s own natural larder: fresh ingredients grown and foraged in the hotel’s gardens. The chefs exquisite, artistic creations look as incredible as they taste. Found in the oldest part of the hotel, off the drawing room, Freddie’s speakeasy-style cocktail bar has everything you need for a decadent nightcap, from locally sourced artisan gins to wondrous whiskies – and even their own evening menu with light bites such as charred fennel and orange hummus charred flatbread or Fowey scallop and crab carpaccio. Rum is my spirit of choice, so I ordered a Rum Mochaccino with Meudon spice and made a toast to a blissful day.

A scrumptious bubble and squeak breakfast the next morning was the fuel needed for a coastal hike to Trebah Gardens. Directions are made easy – on reaching Bream Cove you turn right and head across the Rosemullion headland towards the Helford River. It is a picturesque walk taking you past several beaches: Cows, Porth Saxon and Grebe. Save yourself, though – Trebah, in similar fashion to Hotel Meudon (and for which it could be mistaken as its big sister), is also blessed with its own secluded bay at the bottom of the garden: Polgwidden Cove.

You could easily spend all day exploring the four miles of footpaths through the three wondrous valleys, and 26 acres of exotic blooms and champion trees at Trebah. We chose the river walk that cascades down to Polgwidden Cove, where we enjoyed a locally made Roskilly’s ice cream before making our way back to Hotel Meudon along the Carwinion’s footpath through the hotel’s own bamboo plantation.

Rather than making your way inland on the coastal path to reach the gardens, you might like to continue just a little further to Helford Passage and The Ferry Boat Inn. From here you can pop onto the passenger ferry crossing to Helford and the idyllic Helford Creek or simply enjoy the Helford River – a large estuary and popular spot for standup paddleboarding, boating and sailing, linking Falmouth Bay with the eastern side of The Lizard Peninsula.

Or take the coast path in the opposite direction, heading left from Bream Cove towards Falmouth past Maenporth Beach and Stack Point. Once you reach Falmouth’s town beach, overlooked by the impressive Pendennis Castle, you can cross the mouth of the River Fal by ferry to the pretty fishing village of St Mawes, a must-visit spot on the Roseland Peninsula with excellent restaurants, pubs, shops and galleries.

Following a long walk I rewarded myself with a delightful Revitalising Body and Mind massage by Emslie, (a wonderful therapist!) in the hotel’s Sanctuary Suite. If you are heading to Meudon for a wellness break you might also enjoy taking part in a private yoga session in the garden or letting off some steam at one of the weekly fitness sessions.

There’s a rather stylish brand-new outdoor bar too, where Dom, Meudon’s top mixologist will shake you up a cocktail of choice. Mine was their signature Cornish twist on a ‘Bronx’, using local Rosemullion Seafarers Gin, Martini Rubino, Noilly Prat, freshly squeezed orange and dashes of orange bitters – it was (just as Dom had told me it would be) sharp, refreshing and full of citrus zing.

Speaking about Bream Cove, Dom also tells me about the Boxing Day dip – swimmers are welcomed after their plunge by staff with hot water bottles, nibbles and warming mulled wine. It seems this sublime hotel is prepared for every season too.

Hotel Meudon is dog-friendly, (including the garden and beach), rooms cost from £129 per night B&B (based on two people sharing in low season); → meudon.co.uk