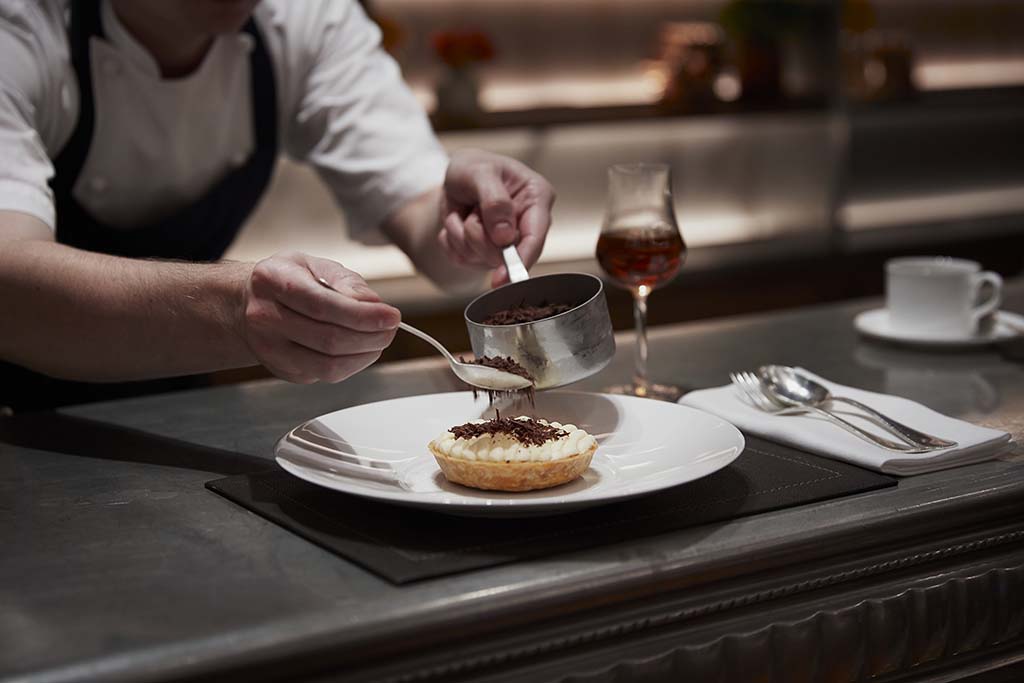 Interview with Tom Booton Head Chef at The Dorchester

At 27 years old, Tom Booton is the youngest head chef in The Dorchester Grill’s 88-year history. He sits down with Chantal Borciani to talk about his inspiration and how he’s transforming a London icon.

Tom Booton’s career actually began at 15 years of age, when he won Chef of the Future at the Essex Food & Drink Awards. His talent was clear, doors opened, and Tom’s ambition saw him succeed at the kitchen passes of restaurants including Le Talbooth, L’Autre Pied and Dabbous. Following stints in New York, Copenhagen and Iceland, Tom worked as head chef for Alyn Williams at The Westbury in London and it was there that the general manager of The Dorchester discovered him. So impressed by his meal, the general manager struck up a conversation with the head chef and the rest is history.

In July 2019, Tom was named the new head chef of The Grill at The Dorchester, heralding a fresh direction for the historic hotel. Built in 1931, The Dorchester has hosted Hollywood starlets, literary greats and royalty. The hotel is famously the establishment chosen by Prince Philip for his stag do the night before his wedding to Princess Elizabeth in 1947. Its Grill restaurant was a business lunch stalwart, but under Tom’s direction the restaurant reopened in November 2019 with a fresher more contemporary air.

“When you walk into the restaurant it feels a lot more open and more approachable. It’s almost stripped back a little now – you’ve got no starched white tablecloths and I wanted guests to feel a kind of home from home vibe. It doesn’t feel stuffy and you don’t feel like you’re scared to ask where your table is,” Tom says.

This is not to say that The Grill doesn’t share the opulence that courses through the rest of the hotel. The centrepiece gold Murano glass chandelier is still retained and through a deft use of glass, mirrors and butterscotch seating and soft lighting, the restaurant feels buzzy yet intimate. The cocktail bar is a sumptuous full run along one side of the restaurant, its myriad decanters twinkling in the glow.

Tom is certainly the fresh face of The Grill – looking even more youthful than his 25 years. “I honestly think age is just a number,” explains the head chef. “I’ve been working for 12 years at a high level. I would say 12 years in any trade is quite a lot really – I don’t suppose there’s many people my age who have worked for more than a decade doing the same thing. A lot of my guys in the kitchen have worked with me before. It’s a young team as well – my sous chef is only 25 – but I knew I wanted him and he would be brilliant.”

Confident, highly trained and full of energy, Tom comes to The Dorchester with vision and aptitude in equal measure.

“The general manager [of The Dorchester] came to eat at the Westbury and that’s how this all started. It certainly teaches you to look after every single table, because you never know what might happen!

The general manager and the food and beverage director invited me to the hotel. The first thing I said when I walked into The Grill was why do we have this bar at the back? The counter was a lot higher, you see, so it was tricky to reach your drinks and it just didn’t work as a space. It seemed clear to me; lower the bar, put a little kitchen in the back and make it into a pudding section.”

The Pudding Bar is one of the pieces of theatre Tom has created in the reinvented Grill, believing dessert should be “savoured not skipped”. Diners who choose to move to the clutch of bar stools along the open ◊ kitchen pass can watch and talk to the chefs as they prepare dessert bowls of heaven – from an irresistible banoffee tart to Tom’s new classic, the ‘Double Decker’.

While much has been reimagined, Tom doffs many a cap to The Dorchester’s rich history. “It’s such an iconic hotel. I looked into the history, the war secrets and the stories through the eras,” Tom says.

Stories do indeed abound. When the hotel was built after World War I, the new building was constructed from reinforced concrete, to make giant open-plan rooms a possibility. During World War II, this made The Dorchester one of the safest buildings in the capital. In 1944, General Eisenhower set up base in the hotel in what’s now known as the Eisenhower Suite and planned the Normandy landings of D Day and during the same era, Ernest Hemingway used the hotel as a London base from which to work as a war correspondent.

Today, the hotel stands in the same much-envied spot overlooking Hyde Park. Brunei-owned, the décor is unavoidably lavish with gold and Middle Eastern hues alongside some more traditional palettes.

On the menu, Tom’s dishes often make a play on the classics; a prawn scotch egg with a warm tartare sauce, The Grill’s lobster thermidor tart; and doughnuts and ice cream.

“I hate the phrase signature dish, but the lobster tart is what we are becoming known for. The menu is designed as four courses, with the first course being very light, for example a really beautiful fresh scallop ceviche – we get fresh scallops in every day from the Orkney Islands. My favourite dish from the second course is the veal sweet bread, which goes really nicely with a little lentil ragu. For the third course, we have the lobster and great British meats. There’s a really fresh rack of lamb dish with a lamb boulangère on the side.”

The menu will change with the seasons, classics will remain and so will Tom’s ethos.

It seems The Grill has fallen into the right hands to steer it through the next era, complete with Pudding Bar, inventive cooking and a passionate brigade.