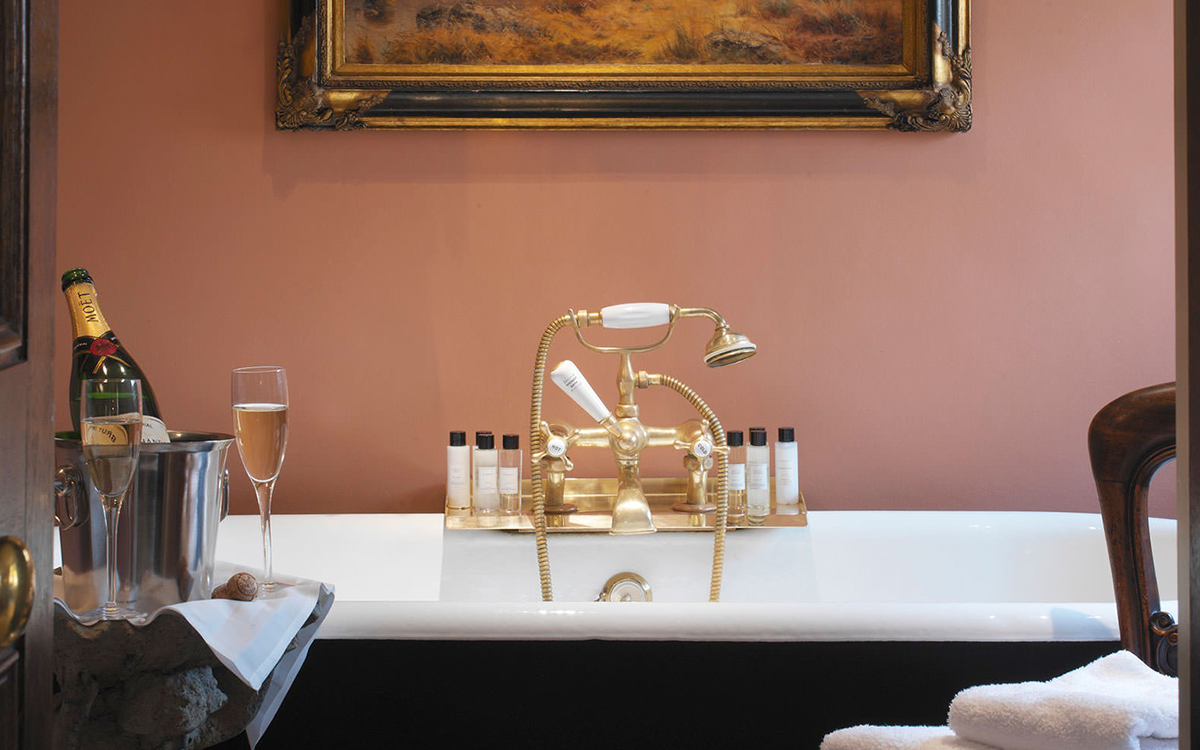 The UK’s cities are a treasure trove of travel inspiration, each offering its own character, charm and attractions, with the essence of each location reflected in its hotels, B&Bs and inns. From London to Manchester, Bath to Edinburgh, here the Good Hotel Guide shares some of its top city hotels to visit in 2023.

With its bright lights and abundant heritage, London has to be one of the best cities in the world for a getaway. The city’s hotels encapsulate the many different styles and locations that it has to offer, from quirky Clerkenwell to historic Spitalfields, excelling when it comes to charm and always making guests feel special.

The sister hotel to Hazlitt’s and The Rookery, Batty Langley’s delivers a similarly sumptuous style.  Grand, elegant and playful, it’s the perfect place to spend time with a loved one, talking, drinking coffee and celebrating special occasions. Rich panelling, crushed velvet and quirky details characterise the décor and make it deliciously seductive.  Start the day with breakfast in bed, then spend your time exploring the city.

Local attractions: Spitalfields is a lively corner of East London, known for its creative scene and its multicultural community. Home to artists and creatives, Brick Lane is a particularly famous haunt, known for its street art, quirky shops, trendy bars and curry houses. The area is a popular destination for the foodie and fashionable, particularly Spitalfields Market where you will find artworks and artisan fare every day, in a tradition dating back to 1197.

Located in Smithfields, The Rookery sits on a narrow lane in a converted 18th century property.  It feels more like a private club than a hotel and is known for its superb food as well as its hospitality. Rooms feature carved oak beds, four-posters, heavy silk curtains and vintage shutters.  For a particularly special occasion try the two-storey penthouse, which has a sitting room beneath a 40-foot spire. The hotel is innately romantic, but they also offer dedicated couples’ packages, including a romantic retreat complete with a five-course tasting menu, a glass of Bruno Paillard Rosé Champagne and a box of chocolates on arrival.

Local attractions: Clerkenwell has become increasingly fashionable over the years, a commercial corner of Islington, where Farringdon Lane has formed an intersection between edge of the City trades across the centuries. Since the mediaeval period, Clerkenwell has been known for its jewellery makers, lock-makers, printers, bookbinders and more. Today it’s populated with hip cafes and indie shops, historic pubs, sleek bars and gastropubs. It’s home to Exmouth Market, Smithfield Market (both steeped in history), and nearby you will find the Sadler’s Wells Theatre.

Bath is known for many things; its spas, its architecture, its history and its culture, but chief amongst them all is its beauty.  Encompassing all of that and more is its hotels and guesthouses.

Occupying three Grade I listed townhouses on a splendid Georgian terrace No.15 by GuestHouse is a boutique hotel and spa owned by the Guest brothers. Dog friendly and chic it’s the perfect balance between heritage style and modern hospitality. There are whimsical touches in the decor, such as a ceiling with exotic bird wallpaper inspired by the pergola in Henrietta Park opposite. Each room has its own unique features (for example, those in the coach house have a lounge area, a working fireplace, stand-alone bath and rain shower). The basement spa is intimate and carefully thought out – for example, it has a circular copper bath for two. Meanwhile food and drink is adventurous and delicious – beloved by adults and children alike.

Local attractions: Bath is an enchanting city filled with pretty shops and cafes, beautiful architecture and abundant history. You could happily spend the day simply wandering and exploring, but there are some choice attractions to keep in mind. Notably, The Roman Baths and Thermal Bath Spa, from which the city draws its heritage are certainly worth a visit. The mediaeval Bath Abbey is a sight to behold, a stroll across the shop lined Pulteney Bridge is a must, a walk along The Royal Crescent is inspiring, and a trip to The Jane Austen Centre is always a good idea.

Those who have visited will know the magic of Oxford, its collegiate buildings and its sense of history. There is much to enjoy, both in the city and the surrounding countryside.

In a 17th-century building, the Old Parsonage is an intimate hotel that sits behind old stone gates and welcomes you with open arms.  Inside the historic exterior is a lively art collection enhanced by rich reds and pinks.  Get to know the area on the hotel’s complimentary daily walking tour, which comes highly recommended, or use one of their available bicycles for free!

Local attractions: This university city has been famous across the ages, and it’s lost none of its beauty over time. One of the prettiest cities in the UK, it revolves around the University of Oxford, which dates to the 12th-century and everywhere you walk there are reminders of its scholastic tradition. Visitors will love the architecture as well as sites including the Bodleian Library, the Ashmolean Museum of Art and Archaeology and the Oxford Botanic Gardens. Warmer days invite you to go punting on the river, have picnics in Port Meadow, or take a trip to nearby Blenheim Palace. Other favourite features include live music at Jericho Tavern, a tour of Oxford Artisan Distillery, a tour of Oxford Castle and Prison, or a drive to the designer retail outlet – Bicester Village.

Liverpool is an eclectic, vibrant and joyful city to visit with so much to offer when it comes to history, art, music and culture. The surrounding area continues to expand the mini break experience with everything from scenic country views to a day at the races.

In Liverpool’s Georgian neighbourhood, Hope Street Hotel is a chic retreat behind a pink 1860s Venetian palazzo facade. Inside, the four-star hotel is impeccably designed, with details like bespoke cherry and walnut furniture alongside crisp white finishes to give it a fresh atmosphere. Amongst the favourite rooms are the Rooftop Suites which boast some of the best views in the city complete with a terrace and spa baths for two. Within this deceptively spacious city hotel, there’s also a spa, where exposed brick walls create a contemporary vibe, and facilities range from a 15-metre pool with underwater music to therapies from the TEMPLESPA and REN brands.

Local attractions: This maritime city has an abundance of character and its own distinct style to welcome visitors. A feast of modern and historic attractions, whether you want to party the night away or explore the city’s heritage there’s an enormous amount to see and do in this former City of Culture. The Museum of Liverpool sits like a spaceship on the historic waterfront in the Royal Albert Dock, football fans will delight in a match at Anfield Stadium, take a tour of the Royal Liver Building – Europe’s first skyscraper and a visit wouldn’t be complete without an evening at the brick vaulted cellars of The Cavern Club in homage to The Beatles.

Edinburgh is a city of romance, history, architecture and profoundly good taste, where speciality tea and coffee shops outnumber the chains and where inherently warm hospitality prevails.

In one of the New Town’s elegant terraces, The Bonham is just a 10-minute walk from the famous Prince’s Street, but still gives you a sense of peace and tranquillity as you retire for the evening. Enveloping you in a world of heritage and charm, the hotel is decorated in bold colours and rich fabrics – velvet-upholstered chairs and wood panelling, beautiful wallpaper, striking chandeliers and exceptional artwork throughout. Many of the rooms enjoy views to the street’s gardens or Firth of Forth, and food is an elegant array of dishes using local ingredients.

Local attractions: Edinburgh is a jewel of a city, famous for a variety of things, ranging from its whisky walks to festivals. Its cobbled streets and elegant architecture transport you back in time. It’s a beautiful place to watch the world go by, but there are also lots of things to see and do. Top attractions include a visit to Edinburgh Castle, a stroll in Holyrood Park and a climb to Arthur’s Seat for 360-degree views of Edinburgh and the Lothians. Ascend Calton Hill to the National Monument, shop on Prince’s Street and don’t leave without doing the Scotch Whisky Experience on the Royal Mile.

This major northwest city is perhaps most famous for its industrial heritage, something it has built on over the years to become a multifaceted destination for work and travel. From the Castlefield conservation area’s 18th-century canal system to the revitalised Salford Quays dockyards, Manchester has much to offer as well as beautiful places to stay.

A small, luxury hotel in a Victorian villa, Didsbury House is brimming with charm and combines its heritage with distinctly modern style. There is very much a sense of home at this hotel, with luxe lounges featuring comfy seating, views across the gardens and lots of different spaces to unwind in. For example, there’s a snug bar, a walled terrace, and a refreshingly light breakfast room for that morning coffee. The rooms are contemporary but with classic touches, ranging in size and each with its own individual colour palette and style. A favourite feature is the Opus Loft Suite on the second floor with its exposed beams and lounge area.

Local attractions: Didsbury Village, home to Didsbury House, is just a short distance from Manchester City centre, making it a tranquil place to stay but still within easy reach of the area’s top attractions. Those visiting have a wealth of attractions to choose from, whether you want to take in a football match at the Etihad Stadium, enjoy a show at the Opera House, visit the covered market halls of Bolton Arcade, shop on St. Anne’s Square, walk along the canals and through the reconstructed Roman Fort, or visit the popular Imperial War Museum North.