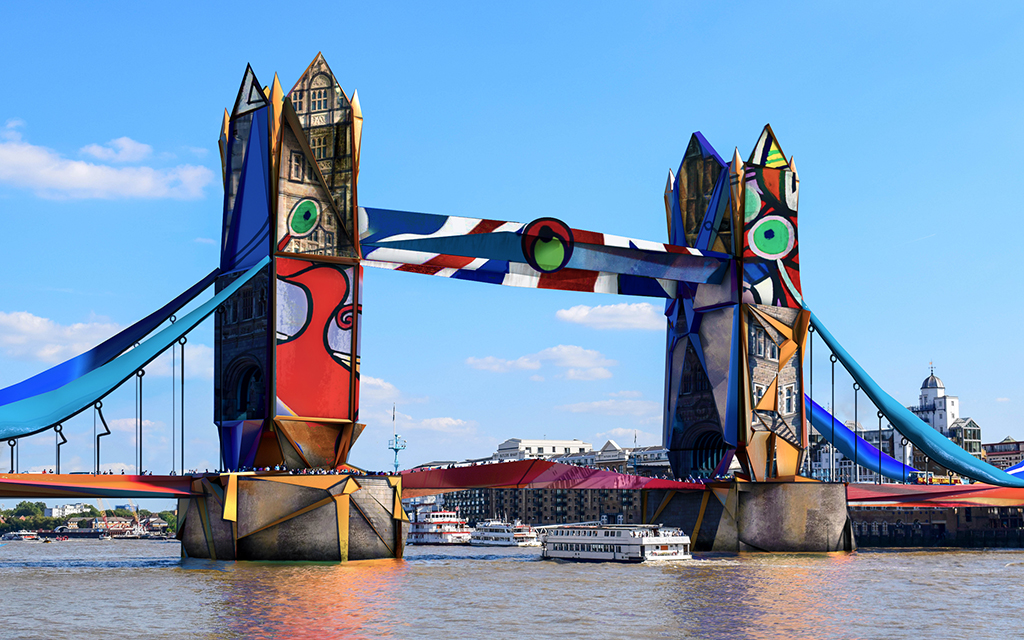 The UK’s landmarks are a symbolism of our history, heritage and pride.  TransPennine Express is celebrating the rich culture of our famous buildings and landmarks, by reimagining them in the style of famous artists and architects.

London isn’t short of famous landmarks, but Tower Bridge is one of the oldest and best. It was built 125 years ago, to ease road traffic whilst maintaining access to the Pool of London docks. With giant moveable roadways that allowed ships to pass, it quickly became an important part of central London infrastructure.

In this reimagining, the towers are painted in Picasso’s distinctive abstract style (pictured above). The bridge’s centre has a fitting tribute to the Union Jack, whilst the suspension is a mixture of blue and orange colour blocking.

Birmingham’s Bullring is one of the most hectic shopping hubs in the UK, today housing some of the world’s most famous brands. The area where the iconic building sits today was once a market in 1154, with part of it using for bull-baiting, which is where the name comes from. The Bullring is known for its futuristic design, having been redeveloped in 2003.

Gustav Klint was known for his symbolist paintings, using the female body as the primary subject. The reimagining of the Bullring has borrowed from Klint’s famous ‘Golden Phase’, where many of his paintings used gold leaf – fitting for the Bullring, as it houses one of the UK’s most expensive department stores, Selfridges.

Liverpool’s docks dominated global trading back in the 19th century and are an important part of the city’s culture today. Andy Warhol’s work was heavily influenced by mass culture and how it impacted everyday life, so his style was an obvious choice for the reimagining of this bustling World Heritage landmark. The design takes inspiration from his iconic 1962 piece ‘Campbell’s Soup Cans’, using his bright pop-art colour palette.

Beetham Tower is the highest building in Manchester. Construction on it completed in 2006. It was designed by Ian Simpson, who also designed Urbis. The light-reflecting glass panels are the most striking feature, but the tower has become infamous for its UFO-esque hum when it is especially windy. In this reimagining, Beetham Tower has been designed by the Swiss architect Le Corbusier – bringing his bold, brutal style to the skyscraper, with plenty of block colours and loud shapes.

Edinburgh Castle is the city’s most iconic landmark, steeped in history and a prominent feature on the city’s skyline, from its position atop Castle Rock. It houses some of Scotland’s most important artefacts, such as the Honours of Scotland and the Stone of Destiny. The outside is distinctive, as the fortress walls dissolve into the volcanic rock as if they were one entity. It is the culmination of the Royal Mile, and tourists flock here every day to get a sense of life for the Scottish royals in the Middle Ages. In this reimagining, Antoni Gaudi’s influence is immediately obvious – with his Gothic free-flowing style taking over the Castle’s towers and walls, featuring colours borrowed from Park Güell. The roof of the castle becomes like his Casa Batlló building in Barcelona.

Glasgow’s Duke of Wellington statue has become an iconic symbol of the city’s humour, as it’s regularly seen with a traffic cone upon the Duke’s head. The statue itself is quite traditional in nature, with the Duke sitting proudly on his horse. The Italian artist Carlo Marochetti designed the original statue, which was erected in 1844. The tradition of cone-capping began in the 1980s, and today, the cone has been granted recognised status as part of the statue. The art of putting a cone on the Duke’s head is a practice that acclaimed visionary Dali would love, so it seemed like a natural fit to re-imagine the statue in his style. In true Dali fashion, the Duke has swapped out his trusty steed for a flamboyant elephant, and the cone has been given a surrealist makeover.

Durham Cathedral is a much-loved treasure, constructed between 1093-1133. It is recognised for its Romanesque style. It is one of the most well-preserved Norman buildings, and it is today recognised as one of the world’s greatest cathedrals. If it had been like most Norman buildings and been substantially modified beyond recognition, it could look something like the reimagining. Louis Kahn was known for his distinctive Modernism style, which he combined seamlessly with a homage to ancient monuments. TransPennine Express reimagined the Cathedral with Kahn’s famous circle and triangle shapes, made famous from his work on the National Assembly Building in Bangladesh.

York Minster is a breath-taking sight in the heart of the city, loved by locals and famous figures for its Gothic architecture. The Minster was completed in 1472, but the site was originally used for a wooden church in 627. Fittingly, Frank Lloyd Wright was known for his ‘organic architecture’, using natural materials in his construction to ensure harmony with the area’s natural environments. He was known for his broad flat roofs and overhanging eaves. The reimagining of York Minster borrows elements from some of Wright’s most famous buildings, including Fallingwater and the Jacobs House.

The Angel of the North was created by Anthony Gormley in 1998, as a tribute to coal miners and the industrial heritage of the area. The Angel itself is based on a cast of Gormley’s own body. In the reimagining it has been designed by Leonardo Da Vinci, the Renaissance legend, using his ingenious knowledge of proportions and angles to create a unique angel, in the style of his Vitruvian Man.

The Millenium Bridge is one of the more recent bridges built on the Tyne, and is the most unusual to look at, connecting the waterfronts of Gateshead and Newcastle. A competition was held to decide the bridge’s design, and the winner was the attractive style you see today. However, what if the bridge had been built earlier, and the winner of the competition was the American artist Georgia O’Keefe? O’Keefe was one of the pioneers of 20th Century art, playing by her own rules. She was known for using nature as inspiration, painting bright, flowing colours, which have come to life in this reimagining of the Millenium Bridge.

Leeds Town Hall is one of the largest in the UK, having opened in 1858. The reimagined Town Hall is equally as dramatic as the original but in a completely different way. The bold, imposing architecture is influenced by geometric shapes. The Gothic roof has been replaced by a flat, functional alternative. If you are wondering where you’ve seen a similar building, one of Breuer’s most iconic buildings after he made the move from furniture designer to architect was the Whitney Museum of Modern Art in New York.

The Humber Bridge is an important piece of infrastructure, used by millions of drivers since it opened in 1981. It’s known for its sheer size, as the UK’s longest single-span suspension bridge. Whilst it’s plain exterior blends in perfectly with its estuary surroundings, the Kandinsky reimagining ponders what the bridge would look like if things were more colourful. As the pioneer of abstract art, Kadinsky was all about expressing himself with shapes and colours. His design would be a bright way to welcome visitors to the Humber region.