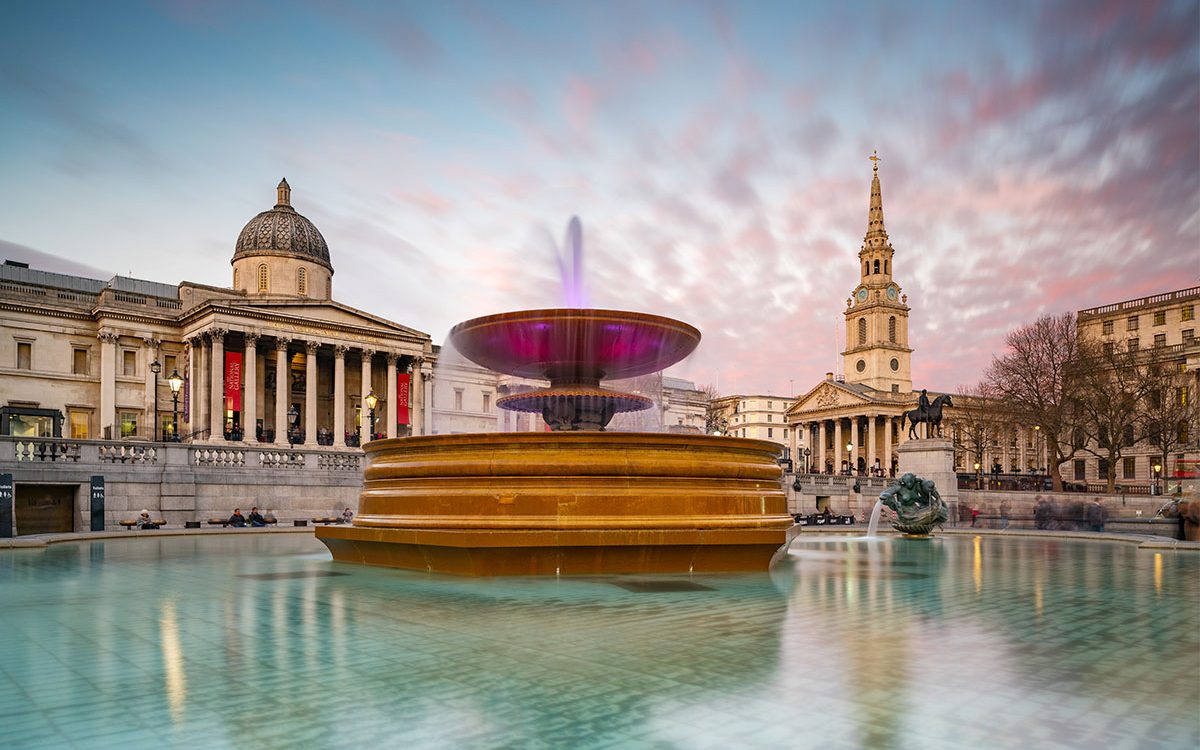 Vibrant cities to visit this Autumn

This is the ideal time to visit one of our great cities. The summer crowds have dispersed and there’s always a cute café, diverting shop or fascinating museum beckoning you in, should the weather turn.

You can’t beat the buzz of a city. From boat-lined canals to grand palaces and sweeping countryside, Britain’s cities and their surrounding areas are packed with romantic charm, culture and history, offering something new and exciting to discover at every turn.

So if a walk through London’s ‘Little Venice’ or exploring ‘Mr Darcy’s’ grand estate near Manchester sound like dream getaways, here’s how to add a touch of enchantment to future city stays, whether exploring by foot, bike or on the water.

Discover the capital’s tranquil side with an atmospheric autumnal walk along Regent’s Canal, just north of Paddington.

This nine-mile canal-side walk starts in picturesque Little Venice, continues past the historic locks to Camden Town and finishes in London Docklands. For some laid-back romance you could explore Regent’s Canal by boat. Options include Jason’s Trip, which has been delighting visitors since 1951, passing sights such as Regent’s Park, Cumberland Basin and Primrose Hill along the way.

Or, book onto a quirkier walking tour to get under the skin of the city – an eating or cultural tour around Brick Lane and Spitalfields, one with a local architect around some of London’s more interesting buildings, a Sherlock Holmes or a Brit Movie tour, for example. With smallcarBIGCITY you can even enjoy a themed driving tour of your choice in a Classic Mini Cooper.

New cultural highlights for 2021 include the Alice: Curiouser and Curiouser exhibition at the V&A (until 31 December 2021) and the world’s largest touring exhibition of Banksy artworks is in the West End (until 21 November). As night falls, head to the award-winning Regent’s Park Open Air Theatre, with performances of classic plays, including Romeo & Juliet and Carousel (until 30 September).

Indulge in afternoon tea – whether you go glam at The Ritz or hip at Sketch.

NoMad London, formerly Bow Street Magistrates Court, in Covent Garden, launched in the spring. We love the spectacular landscaped glass atrium used for dining. Doubles from £383 per night, room only.

Brighton is packed with romantic landmarks, many of which reveal the region’s royal connections. Future explorers can revel in the grandeur of the Royal Pavilion. Built in the 18th century for King George IV, it was subsequently used by King William IV and finally Queen Victoria. A Brighton institution, it is known as a beacon of luxury, awash with opulent treasures and topped with majestic domes. Visitors longing to explore this regal home can enjoy a virtual tour of the Royal Pavilion, before booking the real thing. The palace is currently furnished with over 120 remarkable decorative works of art on loan from Her Majesty the Queen. Originally commissioned by the Prince Regent, the items have been relocated from Buckingham Palace and reunited in their former home until January 2022.

Longing for the great outdoors? Why not experience the romantic landscapes of Seven Sisters Country Park, part of the South Downs National Park. Marvel at the sprawling white cliffs, winding waterways and unspoilt grasslands.

Artist Residence, a hotel encapsulating the spirit of a town into one building; creative, bohemian and downright eccentric. The 24-bedroom townhouse is at the head of Regency Square and each room is a riot of original artwork and local character. Doubles from £255

Take time to visit Lyme Park, an Italianate palace that became Mr Darcy’s grand residence in the BBC’s adaptation of Pride and Prejudice, just 20 miles south of the city centre.

The 1,400-acre estate is home to a large herd of deer, a lake and a fragrant rose garden. Jane Austen fans can also enjoy an atmospheric Pemberley walk, which takes in several picturesque filming locations.

There’s also the new RHS Garden Bridgewater just outside the city – at 154 acres it’s Europe’s largest garden project, or the brand new ‘I’m a Celebrity…Jungle Challenge’ at MediaCityUK, with its fun challenges and trials. Stay at: Be one of the first to stay at the 10-floor Resident Hotel (formerly Nadler Hotels) within the brand new St John’s Place development – an enormous neighbourhood on the former site of Granada Studios, incorporating residential homes, world-class hotels, a work space, intimate streets, lively courtyards and The Factory (billed as the North of England’s new flagship cultural venue) although the date of opening is still uncertain.

This well-heeled little place has all the ingredients for a wonderful weekend break. Winchester does tradition well, from its cavernous cathedral to its highly regarded independent school, Winchester College. History oozes from many other buildings. The Westgate Museum details the area’s Tudor and Stuart history and is housed in the last remaining medieval gateway into the city. The Great Hall, the only remaining part of Winchester Castle, is home to King Arthur’s legendary Round Table.

Just outside the city are a slew of stately homes, as is Jane Austen’s House in Chawton. History with a modern twist comes courtesy of a former silk mill, newly opened as Inn the Park in Winchester’s Abbey Gardens. The space combines an open grill restaurant, bar, café and wine room.

Jane Austen fans can also do a guided tour of Jane Austen’s Winchester.

Lainston House Hotel, a 17th-century mansion Exclusive Hotel, offering tennis, fishing and falconry. Prices from £176 per room, per night. Or for location (walking distance of the city centre) you can’t beat the very first Hotel du Vin, which is still providing luxury at a good price. Doubles from £99 per night, room only.

You won’t mind getting sent here, especially as Coventry celebrates being UK City of Culture 2021 with art exhibitions and cultural events taking place throughout the year. Plus, look out out for The Show Windows – ambitious window installations designed by local architects – and specially commissioned street art. At the Herbert Art Gallery & Museum, a new exhibition ‘Hyper-Possible’ runs from October. Also here are paintings of bold local lass, Lady Godiva (a statue of her naked on a horse is on the street nearby). Coventry’s medieval cathedral was left devastated after World War II and a beautiful 20th-century replacement with abstract stained-glass windows sits alongside. It’s typical of the city, which was heavily bombed. Expect brutalist car parks alongside Tudor cottages – a heavenly hotchpotch.

The Telegraph Hotel, which opened in May is a conversion of the local newspaper offices. Doubles from £67 per night, room only.

How can a village become a city? When it has a cathedral of course and the one in St David’s is large, given the tiny population. It’s a charming place, with historic sites, shops and restaurants – including the UK’s first insect restaurant, Grub Kitchen. There are also alternatives for those with more conventional appetites. It’s easy to potter away for many an hour, but what’s on the doorstep is worth exploring. St David’s is on the Pembrokeshire Peninsula, with magnificent coastline all around. In autumn and winter you’ll have it mostly to yourself for windswept walks or horse riding. Or why not wrap up in a wetsuit for some winter surfing?

The night sky is often incredible in west Wales. If staying at Twr y Felin book a Star Gazing Hamper, which includes binoculars, torches, a constellations guidebook, camping chairs and a thermos of ‘tiddly’ hot chocolate.

A Royal weekend in Edinburgh

The place to start is Edinburgh Castle, the former royal residence and military base which sits atop Castle Rock. There’s lots to see inside and outside and there’s the bonus of 360-degree city views. Back in the Old Town, walk The Royal Mile to another regal residence, Holyrood House. The Royal Yacht Britannia, moored up in Leith, was the holiday home to the Queen for many years. Today it’s one of the best museums in the UK – and don’t miss our competition to win tickets and a Champagne lunch on board for two (britishtraveljournal.com/competitions). Tea and scones in the onboard tearoom is a must.

You might also like to book a table at nearby Martin Wishart or The Kitchin, both Michelin-starred. By night, there are bars aplenty, and it would be rude not to try the local tipple at Whiski Rooms or The Scotch Malt Whisky Society – choose from hundreds of rare single and blended malts and order some food to soak it all up.

Try to be at Edinburgh Castle for the one o’clock gun salute.

The new Moxy Edinburgh Fountainbridge. It’s on the site of a famous brewery and has playful, slightly irreverent interiors plus a rooftop bar with great views. Doubles from £66 per night.

The city of ‘dreaming spires’ is famed for its illustrious university. The colleges with their quads, cloisters and gardens are mostly open to the public. Other amazing university buildings include The Bodleian Libraries – such as the circular, neoclassical Radcliffe Camera and Duke Humfrey’s Library, which doubled as the Hogwarts Library in the Harry Potter films.

Oxford is crammed with museums. Favourites include the Ashmolean, with everything from Egyptian mummies to modern art. Then there’s The Pitt Rivers Museum: a quirky collection of treasures from around the world collected by one man on his travels.

Don’t miss the chance to hang out in a studenty waterhole. J.R.R. Tolkien and C.S. Lewis used to enjoy pints together at the Eagle & Child.

The Randolph Hotel by Graduate – this grande dame of a hotel reopened in the summer under new ownership and with a ‘new old’ look. Doubles from £225 per night, bed and breakfast.

The city has one of the UK’s most impressive cathedrals, perched imposingly over the River Wear. See it from the outside, inside and the top (brave the 137 steps up the Northwest Tower for worth-it views).

New this autumn is Museum of the Moon, a giant seven-metre sculpture that will hang from the ceiling of the cathedral, with atmospheric accompanying music.

You can hire rowing boats on the river until the end of September but most visitors are content to just wander the cobbled streets and do like the uni students by hanging out in the bars and cafés. Or, book in for some fine dining at Finnbars or The Cellar Door. There’s more nighttime entertainment during Lumiere Durham (18–21 November) with fantastical light installations and projections all over the city. It’s a great time to visit.

Go for a yomp in the Durham Dales to see the spectacular High Force waterfall.