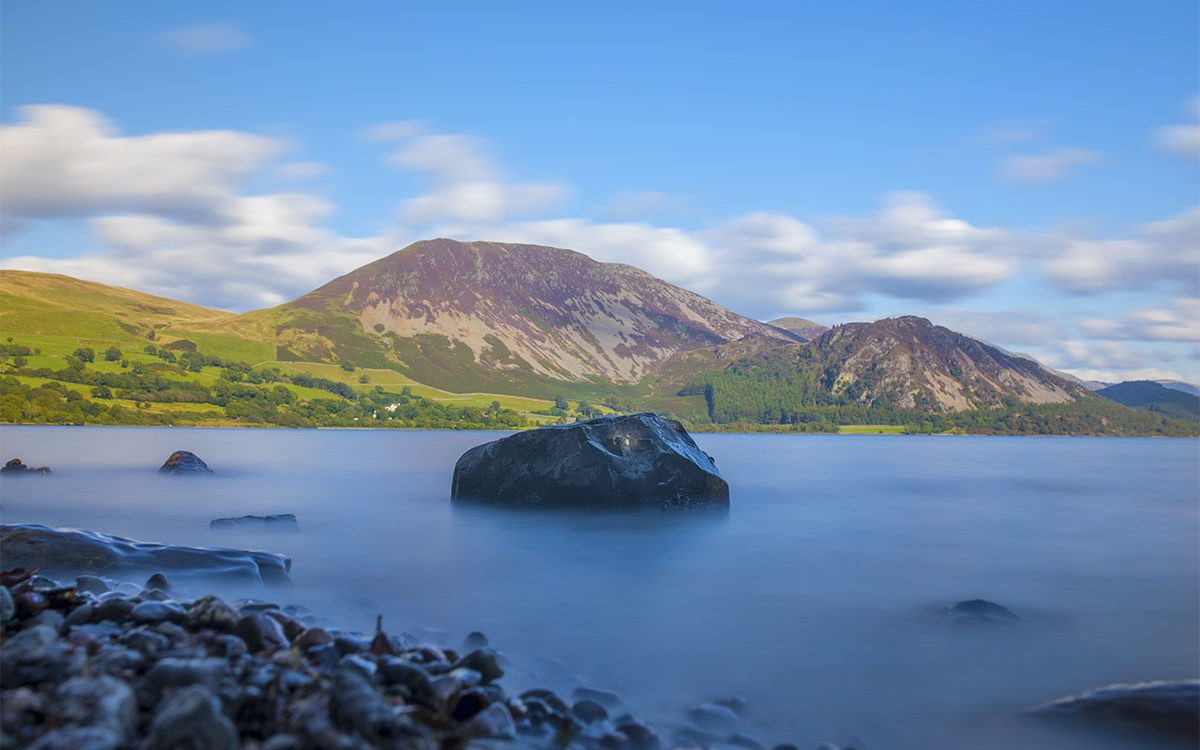 Walking Wainwright’s famous trail across northern England is an epic journey through landscapes, history and time with the chance to explore three of the country’s finest national parks.

Your first decision is a key one. Not which path to take, but which pebble to pick. After all, you’re going to have to carry it 192 miles across England from coast to coast, so you want it to be perfect. And not too heavy.

Anyone familiar with Alfred Wainwright’s epic walking route spanning the north of England from the Cumbrian coast to the North Sea will recognise this tradition. If you’re not familiar with the Coast to Coast, it’s the quintessential English hill walking and long-distance trail experience. The great fell walker and guidebook writer plotted the route in 1973 and almost fifty years on it has a worldwide reputation among walkers, eclipsing all other long-distance routes in England in terms of popularity and variety.

The route as imagined by Wainwright walks up hill and down dale from the tiny seaside resort of St Bees on the Irish Sea to Robin Hood’s Bay near Whitby on the North Sea Coast. Around two-thirds of the time is spent in national parks, traversing the Lake District, Yorkshire Dales and North York Moors via all manner of trails, tracks, rivers, rock-strewn hills, peaty bogs, meadows and moorland.

Dramatic upland scenery along the route includes England’s highest fells and its largest lakes, some of its most beautiful woods and sections of its bleakest, barest moors. There’s wildlife to watch for, traditional villages to discover and the poignant ruins of mills, mines and ancient Iron Age sites to stumble upon. It makes for a perfect two-week walking holiday.

And anyone undertaking this epic journey starts by dipping a toe in the sea and picking a pebble to take from seashore to seashore.

Although you can traverse the country in either direction, most coast-to-coasters walk from west to east, so the sun and prevailing wind is at your back. Starting in St Bees at ‘Mile Zero’, the path heads straight up a long grassy field to stride out along the edge of a towering red cliff. Continuing north past fields of sheep and banks of wild flowers there are superb seascapes and great opportunities to spot nesting seabirds before you turn your face inland, towards the Lakeland hills.

Although not especially tough, the route is certainly challenging enough when you tackle it in one go. Because it’s popular the temptation is to think it’s easy. Don’t be fooled, you’ll be averaging 14 miles a day for two weeks, in fair weather or foul, during which you’ll ascend (and of course descend) the equivalent height of Mount Everest.

Navigation on the network of connecting footpaths, bridleways, minor roads and other rights of way can also be challenging, which is where travelling with HF Holidays as part of a small, escorted walking group makes sense; let your experienced walk leader take care of all the logistics and map reading.

They’ll help bring the route to life too, with insights and stories on everything from local romantic poets like Wordsworth and Coleridge to lessons on medieval history.

The trail through the Lake District crosses the bald crown of Dent Hill, from the top of which are cracking views of the Lakes ahead of you and, on a clear day, even Scotland and the Isle of Man. You’ll then skirt Ennerdale Water and make your way towards Haystacks, the small fell where Wainwright’s ashes are scattered, before reaching the Honister Slate Mine and Borrowdale.

In the heart of Lakeland you’ll explore Helm Crag, Grassmere and Patterdale, pass Angle Tarn at the head of Ullswater, and climb Kidsty Pike, which at 2,560ft is the highest point on the trail.

Then come the picturesque ruins of Shap Abbey, the limestone pavement of Westmorland and empty Ravenstonedale Moor before you reach the attractive market town of Kirkby Stephen. Beyond here, look out for the ‘stone men’ of the Nine Standards Rigg, a row of 10ft cairns protruding from the country’s spine that mark the main west/east watershed of England.

Then leave the Lakes to head into the Yorkshire Dales, swapping craggy mountains for vast, endless moors, which unfurl ahead of you as you descend to the time lapsed village of Keld.

Follow the tumbling river through the Swaledale Valley on foot-worn paths and over stiles smoothed by hiking boots, alongside dry-stone walls and wire fences decorated with clumps of sheep’s wool. Flower meadows are interspersed with fields of crops, before giving way to moorland covered in purple heather. As the miles pass, admire the historic town of Richmond, still dominated by a dramatic Norman castle, traverse the Cleveland Hills and ascend Blakey Ridge. Cross the moors to Glaisdale and Grosmont before striking out for the coast.

“Wainwright’s masterful route-planning means the beautiful tumble of Robin Hood’s Bay itself is hidden from sight until the very last mile.”

Eventually you’ll turn south to follow the trail as it curls along the coastal cliffs from Whitby and its distinctive ruined abbey. Wainwright’s masterful route-planning means the beautiful tumble of Robin Hood’s Bay itself is hidden from sight until the very last mile. Round North Cheek and the red tiled roofs appear at last.

Here, walk through the village to the water’s edge and stand on the slipway. Dip a toe in the ocean. Reflect on the challenge you’ve undertaken and bask in the satisfaction of crossing the country. Revel in the camaraderie you’ve enjoyed with fellow coast-to-coast walkers. Then fling the pebble you’ve carried from St Bees into the sea and seek out a pint of Wainwright’s ale – what else – to toast the end of your journey.

Three more trails to tackle in the UK

Path The complete route along the northernmost frontier of the Roman Empire spans 84 miles from the Solway Estuary in Cumbria to Segedunum (Wallsend) in Newcastle, passing through rolling fields and rugged borderlands, with plenty of chances to gain a rich insight into life in Roman Britain as you walk coast to coast.

Wind your way from Milngavie (Glasgow) to the foot of the UK’s highest mountain, Ben Nevis, at Fort William on Scotland’s premier long distance trail. As you travel through remote Highland countryside, soaring mountains, the shores of Loch Lomond, the wilderness of Rannoch Moor, rushing rivers and giant forests combine to reward you with an ever-changing landscape.

Immerse yourself in the natural beauty of Snowdonia by walking among the mountains from the charming world heritage town of Conwy in the north to Dolgellau on the southern border of the national park. Follow valley trails, hillside paths and Roman roads to discover Aber Falls, summit Snowdon, explore the Aberglaslyn Gorge and bag the peak of Cader Idris.