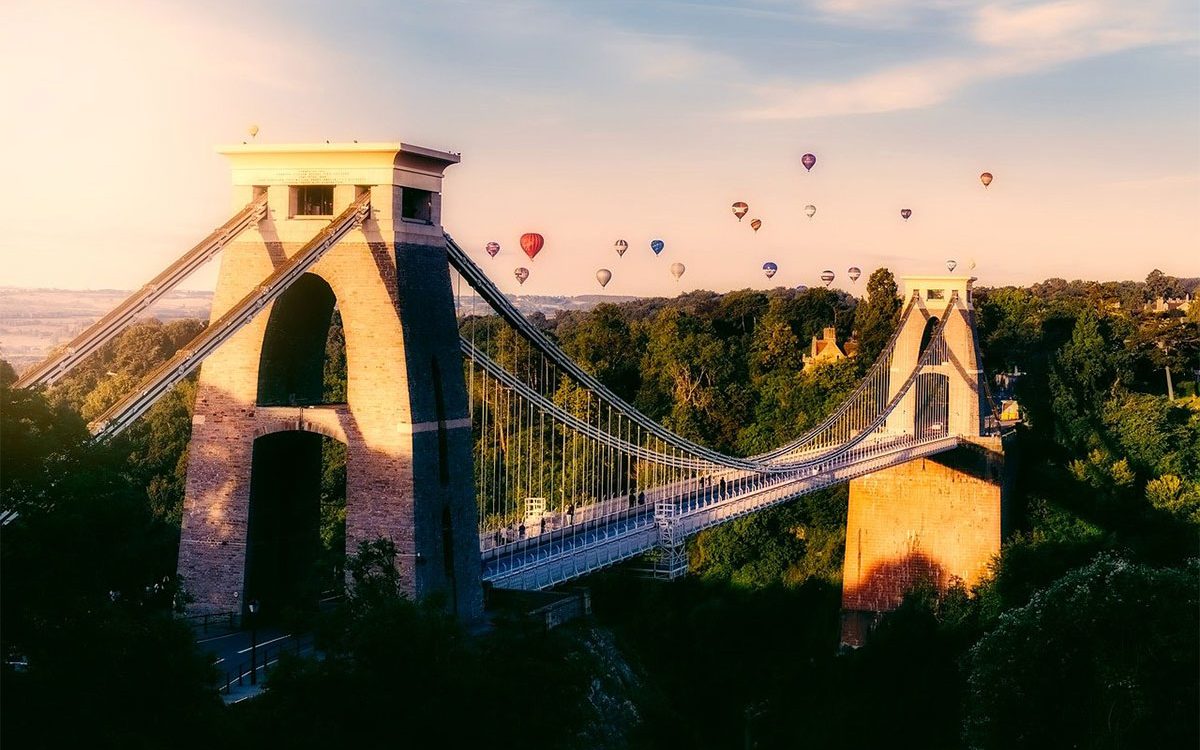 Walking tour in the city of Bristol

From the imposing heights of Clifton Gorge down to this city’s lovely reclaimed harbours, Bristol is a beautiful Georgian port full of energy and colour. Join us for a stroll around its streets.

Start in one of England’s grandest suburbs at the Clifton Observatory, a former windmill that was converted into a camera obscura in 1828. From here, there are impressive views across the Avon Gorge (300 feet deep at this point) and of Brunel’s Clifton Suspension Bridge that has spanned it since 1864. Taking the path down Sion Hill, you pass a complex of 19th-century buildings that gaze out at the bridge. First comes the old Clifton Rock Railway, a funicular that used to drop tourists down to the Hotwells volcanic springs on the banks of the River Avon. Next is the Avon Gorge Hotel, which opened in 1896 as the Grand Clifton Spa and Hydropathic Institution, using water pumped up from those wells to provide an efficacious Turkish bath for guests.

One of them displays a coat of arms depicting St George killing a dragon under the Prince of Wales’ feathers, confirming that the prince in question was indeed the Prince Regent, England’s future George IV.

At the end of Prince’s Buildings on the right-hand side there is a lovely crescent, almost hidden from passers-by. It’s known as The Paragon and, like many houses in Clifton, it enjoys wonderful views across Bristol and its harbours. This row of houses is also remarkable for its unusual semicircular vestibules with their different coloured doors. It was constructed between 1809–1814 during the Napoleonic Wars. The builder John Drew went bankrupt halfway through the project, something that happened to many speculators in those turbulent times.

The same fate befell the builder of Royal York Terrace, which branches off from the left-hand side of Prince’s Buildings. Begun in 1791 as the longest terrace in Europe, this graceful stretch of Regency town houses was designed by Bristol architect William Paty and stands on a huge plinth that had to be constructed first to mitigate against the steep slopes of Clifton. Only completed in 1820, Royal York Terrace was where novelist Angela Carter lived (at No 38) during the Swinging Sixties.

At the end of this terrace turn right into Regent Street, where Victorian Bristol suddenly appears in a series of closely packed Clifton shops. When they end, at Clifton Road, the street curves east with Cabot Tower in the far distance. Bristol consists of a number of hills of which Clifton is the tallest. Cabot Tower, which commemorates John Cabot’s journey to Canada from Bristol in 1497, stands across a valley on nearby Brandon Hill. To get to it from Clifton it’s necessary to walk down Constitution Hill – one of the steepest in the city – to cross Jacob’s Well Road and then climb up through Brandon Park.

But first at the top of Constitution Hill stands Goldney Hall, which was built in the 1860s by a Quaker family who, among other ventures, financed the voyage that rescued Alexander Selkirk (the original Robinson Crusoe) from his desert island. Starting down the hill, there’s a sprinkling of pretty 18th-century cottages that reflect how rural Clifton was before the Regency building spree.

On the other side of busy Jacob’s Well Road, Brandon Hill has been kept as a large, inner-city nature reserve. It’s topped by Cabot Tower, a 105-foot monument built in 1897 with panoramic views from its Venetian-style balcony. After visiting, leave the park by walking down Charlotte Street to Great George Street, which contains some very imposing houses from the reign of George III. One of these is now the Georgian House Museum. It was built in 1790 for a sugar merchant and plantation owner in the West Indies. Many believe that it was here that the poets William Wordsworth and Samuel Taylor Coleridge first met in 1795.

From Great George Street turn right down Whiteladies Road, another steep hill where no two shops have rooflines at the same height. The road gets its name from the White Ladies public house that once stood on this major route between Clifton and Bristol docks. Look left up the hill and you’ll see the monumental bell tower of Bristol University, completed in 1925. It’s 223 feet high and was the last neo- Gothic structure erected in Britain. Walking downhill to the right brings you to College Green and Bristol’s Cathedral.

Because it was successively built, destroyed, and rebuilt from Norman times right up until the Bristol Blitz of 1942, this cathedral seems to contain every style and period of English architecture, although it was all cleverly knitted together in the 19th century.

High above the Avon Gorge stands this 78-bedroom hotel with the best views of Clifton’s Suspension Bridge from its dining room. Opened in 1896, the Avon Gorge is now run by Hotel du Vin, which means that the interiors have the HdV signature features we’ve come to love: dark walls with bright downlighters, moody bedrooms with white-tiled bathrooms and lots of irreverent art.

Bristol’s grandest 19th-century hotel opened in 1868 on College Green, overlooking the Floating Harbour. For many years, the Royal was hotel of choice for visiting celebrities like Laurel and Hardy, Gracie Fields, Winston Churchill and Cary Grant. Closed for decades, the hotel only recently reopened with its original Palm Court majestically restored. A four-storey car park dug into the ground beneath the property is one of the many modern conveniences of this 241-room hotel.

In a dignified square between Cabot Tower and Bristol University’s Wills Building stands the Berkeley Square Hotel, an amalgam of two Georgian town houses that was once the home of Sir Frank Wills, the man whose family endowed so much of the university. It’s a lively, modern hotel with a commitment to modern art and a kitchen that serves excellent food. Leave your windows open at night and you’ll hear ‘Big George’ tolling in the university’s bell tower.

Fishers is a Clifton original, founded by Alison Brown in 2001. If you like fish and seafood, head here for an unforgettable meal. From the outside, it’s a small, unremarkable whitewashed building with blue awnings. Inside it’s low-key too, with small tables and some touches of nautical decor but superb food and wine. If you fancy a picnic ask about the Fishers’ Champagne & Oyster Hamper Box (£59).

High up on Whiteladies Road and down on the quayside at Welsh Back are two outlets of this family-run mini-chain of cheery West Country restaurants. Aqua was founded in 1998 by Richard Smithson and is now run by his son, Ben. Monday to Friday there is a great three-course lunch menu for £18 that extends till 7pm – ideal if you are catching a show. There are also two-for-one Bellinis available from 12pm till 7pm.

Taking over an old Clifton department store, the Coppa Club’s huge plate-glass windows look out on to Regent Street while inside a modern mezzanine floor has comfortable sofas for sitting with your laptop. The Coppa ethos is to combine a bar, a restaurant, a workspace, and café in one welcoming space. The all-day menu focuses on uncomplicated dishes, from Coppa Vegan Burger to Lamb Rump and Flash Steaks plus excellent cocktails.