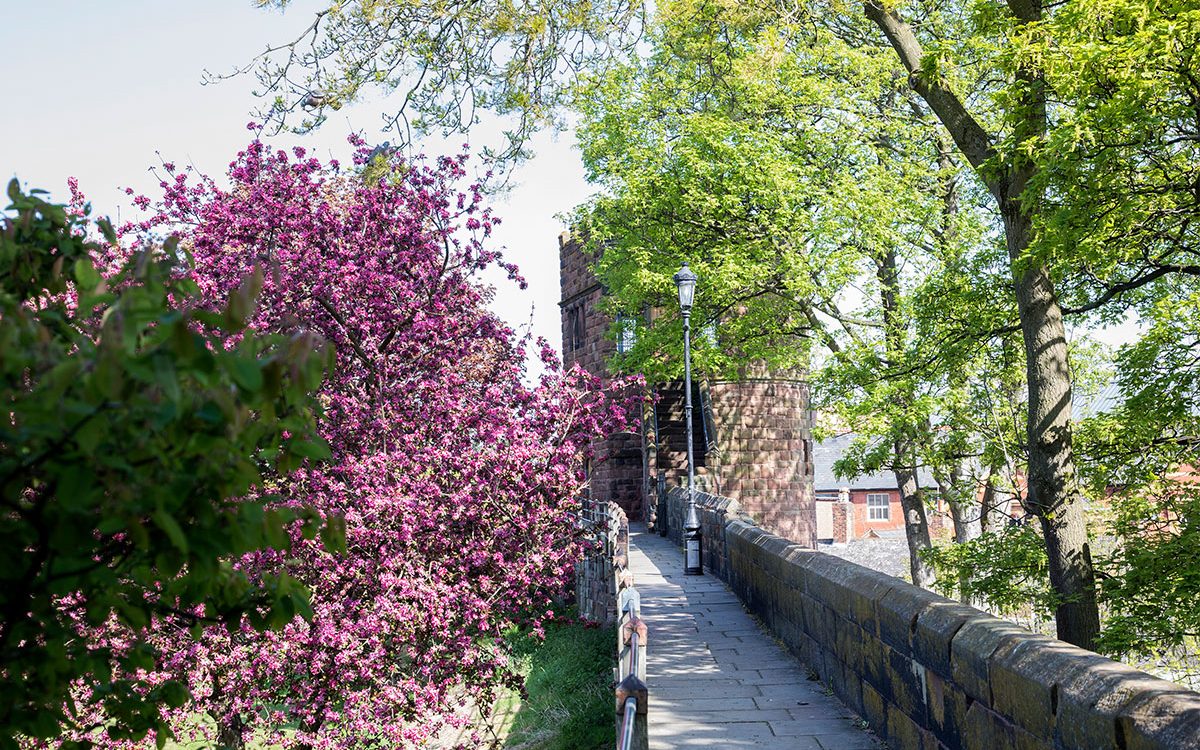 Now that we are able to wander around Britain’s towns again, visiting historic sites and stopping somewhere picturesque for a relaxing lunch, the walled city of Chester is at the top of our list.

Once upon a medieval time every British city needed walls. Most demolished them in less turbulent times, to ease expansion in the eighteenth and nineteenth centuries but a few cities were far-sighted enough – or simply not wealthy enough – and deferred demolition until it happened that walls suddenly became fashionable again. Nowadays we no longer need them to keep out marauders or exclude rebellious armies but walls do keep a town centre compact and they do make for a great Tower found in tourist attraction as well.

Nowhere in Britain have city walls been so well preserved as at Chester, a small half-timbered, sandstone city on the River Dee that was a major west coast port in Roman times. The port silted up in the middle ages and is now a famous racecourse beautifully laid out below the city walls. Today almost every attraction that Chester has to offer the visitor can be viewed from the two mile circuit of these walls.

Distance: This two mile walk takes about 45 minutes but will of course take longer if you stop to take photographs or divert to explore all the curious and historic sights visible from the walls.

Start your visit by taking the steps on Pepper Street up to the walls and turning left. Peppergate was the scene of a famous elopement in Tudor times. The furious alderman whose daughter had slipped through the gate to run away with her lover ordered that it must henceforth be kept locked after sunset, which gave rise to a local saying that mocks any precaution taken too late. “When the daughter is stolen, shut the Pepper Gate.

The city walls are as wide as a modern British pavement and they pass over all of Chester’s gates. Three hundred yards east along the parapet we encounter East Gate over the old Decumanus Maximus, the main Roman road through the city. Originally it continued on as far as Mamucium (modern day Manchester). Here there is a splendidly ornate painted Victorian clock over the gate under which all walkers must pass. It commemorates Queen Victoria’s Golden Jubilee in 1897.

One of the best views into the city is from this clock, all the way down pedestrianised Eastgate Street with its huge range of typical Chester architecture, Gothic, Tudor, Georgian, neoclassical and nineteenth century mock Tudor.

Further along the walls we pass the cathedral and the old abbey grounds. Sometimes you’ll see a range of swift hunting birds being put through their paces below.

At a point where the walls turn north there is a round tower marking the corner. From Roman times Chester was always a rectangular city with rounded corners and a defensive tower at each corner. This particular tower is named after King Charles I who in 1645 is said to have watched the Battle of Rowton Moor unfold from its roof. It was a bad day for the ill-fated king as his army were driven from the field and he narrowly missed being killed by a Parliamentary sniper as he escaped. From here walls now run parallel to the Shropshire Union Canal which is cut deep into the sandstone outcrop on which Chester was built. At North Gate the old Roman northsouth road through Chester (Cardo Maximus) passes below. The elegant, brick-built Blue Coat School, opened in 1717 to provide education for poor and deserving boys of the city is visible from the gate. It is now part of Chester University.

The walls now run westwards, downhill towards the old Roman port. Midway along there is an eighteenth-century round tower with stone seating facing into the city. This was built as the Goblin Tower but now it’s locally known as Pemberton’s Parlour after a mayor of Chester who was involved in its reconstruction. Below this stand two towers built to defend the Roman port. The one nearest the river is called – not surprisingly – Water Tower while the other is named after Bonewaldesthorne, an officer in the army of Queen Aethelflaed, who in the tenth century was responsible for extending Chester’s Roman walls down to the river.

Surprisingly, at this point a railway line is cut straight through the walls. This act of Victorian vandalism was done in 1846, long before the city walls were scheduled as an ancient monument in 1979.

The walk along the western length of the walls gives a good view over the Roodee racecourse which was Britain’s largest port in Roman times. The River Dee now skirts the racecourse in the distance where it is crossed by the Grosvenor Bridge. When this elegant stone bridge was opened by Queen Victoria’s mother in 1832, it was the longest single-span arch bridge in the world, an honour that it retained for 30 years.

After Roodee the wall reaches Chester Castle which was built on raised ground overlooking the River Dee. Constructed over centuries in the same sandstone as the city wall the castle consists of a Norman tower, a medieval stronghold and a sequence of neoclassical buildings that were designed by Thomas Harrison (1788 – 1813) the same person who designed Grosvenor Bridge. Today Chester’s military museum and Crown Courts are housed in the castle.

Just before Bridge Gate the wall briefly disappears and becomes Castle Drive and the University’s Riverside complex, but it resumes within a few hundred yards at Old Dee Bridge. The very first bridge on this site was built by the Romans but this span dates from 1387. On the far side of this low sandstone structure there are the remains of a Roman temple to Minerva and the road then leads on to Wales.

In medieval times relations between the people of Chester and their Welsh neighbours were so bad that it was not deemed illegal to kill a Welshman found within the city. (This law has never been repealed.)

We are almost back at Peppergate but do look out beyond the walls as we come full circle. Next to the eleventh-century Church of St John the Baptist – greatly reduced following many collapses over the centuries – lie the remains of the largest Roman amphitheatre in Britain. Only half of it has been dug out because to uncover the rest several buildings would have to be demolished, not to mention the damage to St John’s shaky foundations. Now it’s time to set off into the centre and explore.

Built by the Duke of Westminster, this five-star Chester hotel represents very high standards of service. It also offers valet-parking and a Michelin-starred dining room with over 1000 wine labels. Simon Radley at The Grosvenor. Eastgate St, 01244 324024, →chestergrosvenor.com

Perhaps the most romantic hotel in Chester is this luxury Georgian villa on the city walls and overlooking the River Dee. A sweeping staircase, working fireplaces and lots of chandeliers complete the blend of heritage and luxury. 22 City Walls, 01244 347007, →edgarhouse.co.uk

This popular modern restaurant close to North Gate was created by Joseph and Benjamin who are also responsible for Porta Tapas next door. This winning team have recently ventured into Greater Manchester too. 134 – 140 Northgate Street, 01244 344295, →josephbenjamin.co.uk

A tiny, cheerful café-cum-bistro that is open from breakfast till very late. Bare boards and black tables rightly place all the emphasis on the food and the service. This is probably also the best vegan restaurant in Chester. Music Hall Passage, 01244 403040, →chefstablechester.co.uk

Close to the race course, the home of Thomas Harrison who created so many of Chester’s fine 19th century buildings has been turned into a pub-cum-dining room offering traditional British dishes with an eastern twist. 54 Nicholas St, 01244 353070, →brunningandprice.co.uk/architect/

Author Martin Dorey headed north in search of solitude on a road trip to England’s least-populated county and a coastline that’s beautiful and often overlooked. […]