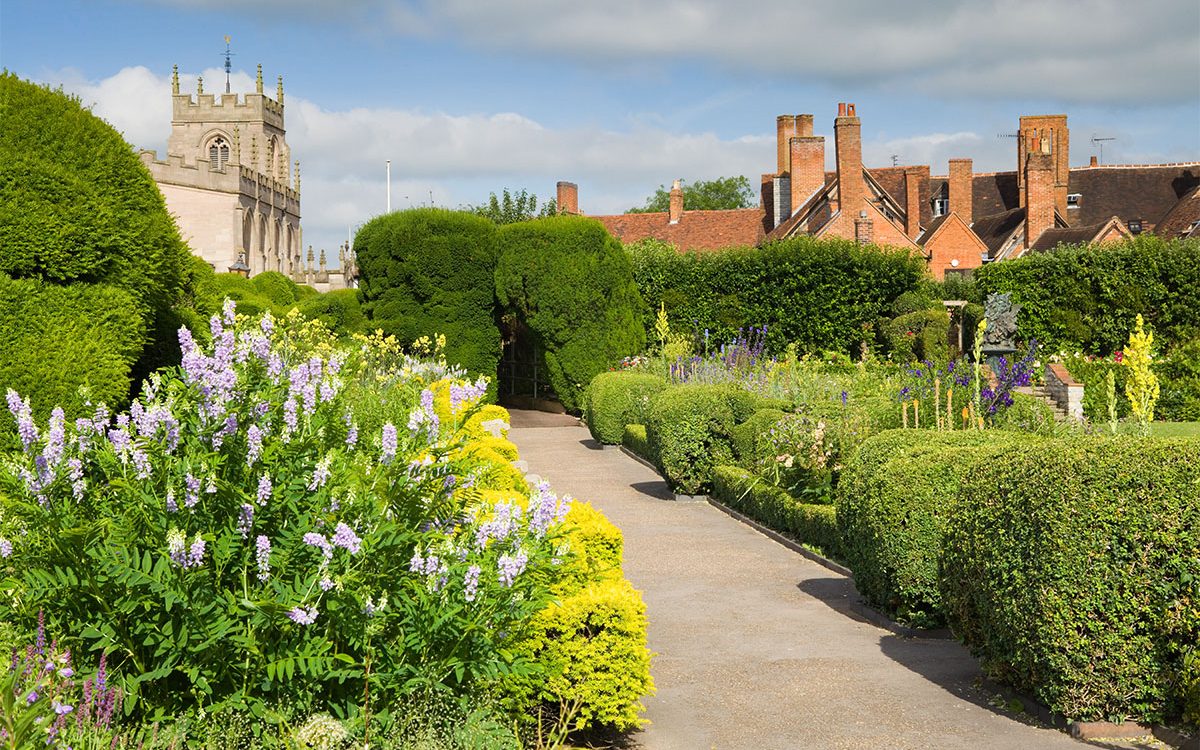 You can’t go anywhere in Stratford without being performed at. In the garden of Shakespeare’s birthplace three costumed performers accost visitors, asking them to name one of his plays. They then declaim a speech from memory for you.

Guests pass through this garden to reach the house from which John Shakespeare ran his glove-making enterprise in Stratford. The ground floor living room is decorated with vividly printed cloth, which was known as ‘poor man’s tapestry’. Shakespeare Senior wasn’t poor, but he was not the gentleman his son became. When William returned to Stratford in 1610, he arranged for a coat of arms to be granted to his father, which meant that henceforth the Shakespeares could carry swords.

John’s workshop for making gloves lies off the living room via a small passageway. It’s been reconstructed as it might have looked in the 16th century and there’s a costumed guide in there to explain how gloves were made in Tudor times. He’ll even tell you how many references there are to leather glove-making in Shakespeare’s plays.

Upstairs, guests can walk through bedrooms and see the attic where apprentices lived. There is a window that illustrious visitors have signed over the years, cutting into the glass with their diamond rings. Among them is the signature of the great Shakespearean actor Henry Irving (1838–1905).

Leaving via the Shakespeare Bookshop, walk down Henley Street past the various buskers to the old Barclays Bank on the corner. Until 1908 this building was Stratford’s market hall. Now turn right along High Street. Though many of the shopfronts ahead are modern, their first and second floors are still half-timbered from Shakespeare’s time. Halfway down on the right stands Harvard House, where the maternal grandparents of John Harvard, one of the founders of Harvard College, Massachusetts lived. Harvard’s grandfather Thomas Rogers (1540–1611), served on Stratford’s borough corporation with John Shakespeare.

As High Street turns into Chapel Street, we come to Nash’s House. It’s another Jacobean half-timbered structure and now contains the New Place Museum, which is devoted to Shakespeare’s last years in Stratford. Thomas Nash married one of Shakespeare’s granddaughters, Elizabeth. Next door to Nash’s stood the house known as ‘New Place’. Shakespeare wrote many of his best later plays here. Sadly the house was demolished in 1759, an act of cultural vandalism that made the then owner so unpopular that he had to leave Stratford. Today the site of New Place is an open-air memorial to Shakespeare, with his gardens laid out in Tudor style running almost down to the River Avon.

Continuing over the road junction into Church Street, the Guild Chapel of the Holy Cross is a 13th-century church with dramatic 15th-century murals. They were paid for by Hugh Clopton, Lord Mayor of London, who had owned New Place before Shakespeare bought it. Ironically Shakespeare’s father was one of those Stratford aldermen who, in the 16th century, whitewashed over these gaudy paintings because they were considered papist.

Next to the Guild Chapel is King Edward VI School, which young Shakespeare attended. In the classrooms upstairs there is often an actor in costume describing school life in Shakespeare’s time.

Escaping the entertainment, continue west on Church Street and turn left into the lane known as ‘Old Town’. Soon you’ll come to Hall’s Croft, a grand timber-framed Tudor house that was the home of Dr John Hall, who in 1607 married Shakespeare’s daughter Susanna, mother of Elizabeth.

We know that the parlour passageway at the back of the house was added by Susanna. We also know that the kitchen was originally a separate building, isolated within the walled garden for fire prevention reasons and only later linked to the house. Upstairs there is a dispensary exhibition reflecting John Hall’s work and medical practices in the early 17th century.

Now walk on down Old Town towards the River Avon and Holy Trinity Church to find Shakespeare’s polychromatic monument in the chancel. This is one of our best-known images of Shakespeare with his pointy beard and bald head. The dramatist’s tomb lies nearby, as do the graves of his family.

Finally, walk through the graveyard to pick up the riverside walk that heads back into Stratford. The route goes back through Avonbank Gardens with its odd little neoclassical temple. This pavilion was once part of Avonbank School, attended by young ladies such as Charlotte Bronte’s biographer, Elizabeth Gaskell and John Ruskin’s future wife Effie Gray. Pleasure boats and rowing boats occupy this part of the river. There is also an old hand-cranked chain ferry called Malvolio that still operates and charges 20p to cross the river. This garden route ends at the Swan Theatre, which was originally the Shakespeare Memorial Theatre that burned down in 1926. It was reopened as a theatre only in 1986 and now houses a small auditorium and a museum of Shakespeare performance called The Play’s the Thing. A boardwalk now takes this route along the river and past the new Memorial Theatre, the best-known Shakespeare venue in the world. It opened in 1932 and was radically reconceived and rebuilt from 2007 to 2011.

A lift from the new lobby takes visitors to the Rooftop restaurant, with its panoramic view across the whole of Stratford.

For the best river views before going to a play at the Royal ShakespeareCompany (RSC), take the lift to the third floor where an informaldining area has been carved out of what once was the back of theauditorium. A chair nailed to the wall above the tables indicates theposition of the back row of the old upper circle. The stage must haveseemed tiny from up there. The RSC Riverside Café is another option fortake-away hot and cold drinks, homemade cakes, sandwiches and snacks.

Built where one of three elm trees once marked the town boundary, thispopular Stratford pub has a courtyard for summer dining and a ‘snug’ andloft for cooler weather. The loft is decorated with original DavidBailey black-and-white photos from the 1960s of stars such as MichaelCaine, David Hockney, and Mick Jagger. The menu offers the best ofBritish pub fare with a number of local real ales offered on a Sip Before You Sup basis – so there’s no danger of choosing the wrong one.

This Greek restaurant is run by chef Dimitri and his ebullient wifeFlair. El Greco offers the chance to eat a pre-theatre main course before heading down to the RSC then come back after curtain-down to finish off with dessert. The service is very cheery; Flair greets just about everyone like an old friend. The house wine is from Macedonia and there is a very good 22-dish Greek Banquet available for just over £20. On Fridays and Saturdays there is often Greek dancing upstairs.

This family home stood here in Shakespeare’s time. Rooms to the rear of the hotel still date from the 1600s, but in 1768 the house was given an early neo-Gothic makeover, with ogee windows to the front. Today the Townhouse is an 11-bedroom boutique hotel with quirky decor and the occasional framed Shakespearean quote.

Legend has it that Shakespeare wrote part of his comedy As You Like It in the library of this stone-built manor house five miles east of Stratford. The Church of All Saints in the hotel gardens was where Shakespeare’s granddaughter, Elizabeth was married in 1646 and may have been where Shakespeare himself married Anne Hathaway. The topiary gardens of Billesley are a reconstruction, but the dining room has an authentically Jacobean feel.

Located opposite the Swan Theatre, the Arden has long been associated with the Royal Shakespeare Company. Many actors have stayed here and the bar is full of production photos. Today the hotel has 35 rooms and suites. If you eat a pre-theatre supper in the restaurant, you can arrange to have dessert delivered to your room to await you after curtain-down.

Vibrant cities to visit this Autumn

This is the ideal time to visit one of our great cities. The summer crowds have dispersed and there’s always a cute café, diverting shop […]

Thought holidays to Devon were mostly about seafood and beaches? Think again… it’s time to leave behind the beach towels and flip flops and prepare […]

Be inspired and educated, as well as entertained, by visiting projects which showcase our natural world at the same time as working to protect it. […]