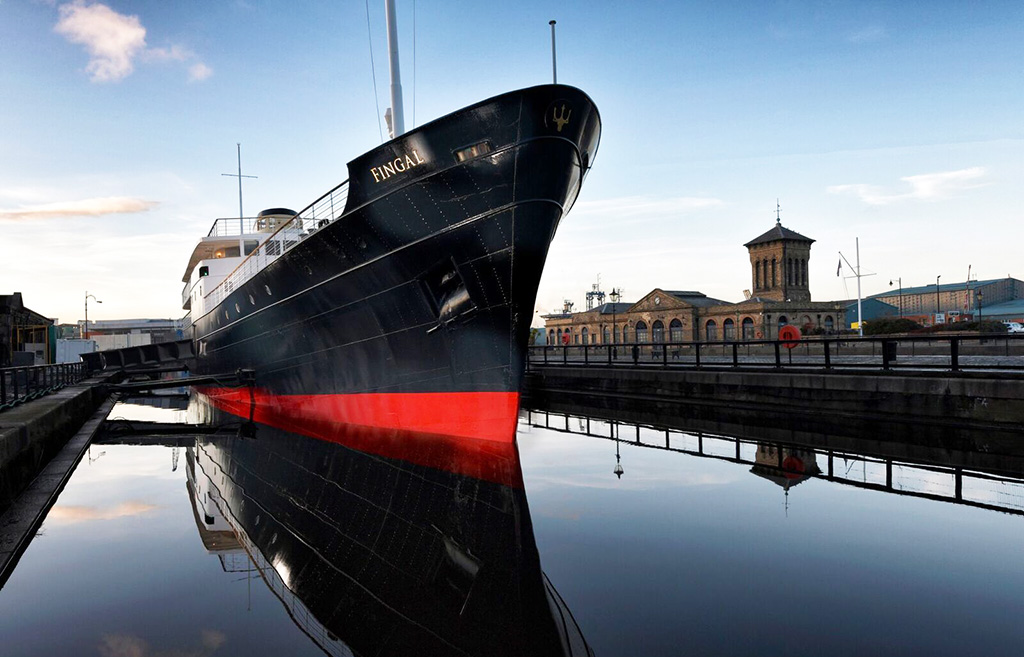 Win a night of luxury staying aboard Fingal in Edinburgh

Enter our competition to win an indulgent five-star break for two, with a truly Royal award-winning experience, in the Port of Leith. Including tickets to the Royal Yacht Britannia with a delicious champagne cream tea!

The lucky winner, and their guest, will be welcomed aboard Fingal, a luxury floating hotel permanently berthed on Edinburgh’s vibrant waterfront, just a short stroll to the shops, restaurants and galleries. Fingal started life as a lighthouse tender, helping maintain lighthouses and transporting their keepers, equipment and supplies to some of the most treacherous locations in Scotland. Now she has been transformed into an exquisite 23 cabin boutique hotel, with decks for stargazing and Champagne, by the award winning team at The Royal Yacht Britannia. This is where time slows to a gentle deck stroll, where you can experience the unhurried luxury of life on board ship and every contour and curve, every angle and tilt of Fingal is certain to offer a totally unique experience, far removed from your everyday world.

Just a short walk from the hotel, the lucky duo will be further rewarded with a magnificent ‘Royal Day Out’, at Scotland’s Best Visitor Attraction – The Royal Yacht Britannia, where they will enjoy stunning panoramic waterfront views, and a delicious Champagne Cream Tea in the Royal Deck Tea Room. Britannia was launched from the John Brown & Company shipyard in Clydebank, Scotland, on 16 April, 1953. For over 44 years the Royal Yacht served the Royal Family, travelling more than a million nautical miles to become one of the most famous ships in the world. To Her Majesty The Queen, Britannia provided the perfect Royal residence for glittering state visits, official receptions, Royal honeymoons and relaxing family holidays. For Great Britain, she was a majestic symbol of the Commonwealth and a proud ambassador, generating billions of pounds in trade deals. For the Royal Family and the 220 dedicated crew of Royal Yachtsmen, she was home. Step aboard this famous ship and follow in the footsteps of Royalty. Explore Britannia’s five decks with the free audio guide, available in 30 languages, as well as a children’s tour and British Sign Language tablet. See the elegant State Apartments and the gleaming Engine Room. See where Prince William and Prince Harry spent their summer holidays. Discover where kings and queens, world leaders and celebrities were wined and dined; from Frank Sinatra and Liz Taylor to Nelson Mandela and Sir Winston Churchill.

In the Royal Deck Tea Room you can enjoy freshly prepared, homemade food, stunning views and a warm welcome. Treat yourself with speciality teas, coffees and lunch where the Royal Family previously would have enjoyed drinks receptions, sumptuous buffets, or played deck games.

Win one of 3 luxury candles from Wynnie Tam Tam, worth £48, just in time for Valentines day. This wonderful calming candle is the perfect […]

Waking up at Hever Castle has the perfect blend of luxury and history combined. 16th-century portraits, paintings, furniture and tapestries charm you happily back to […]