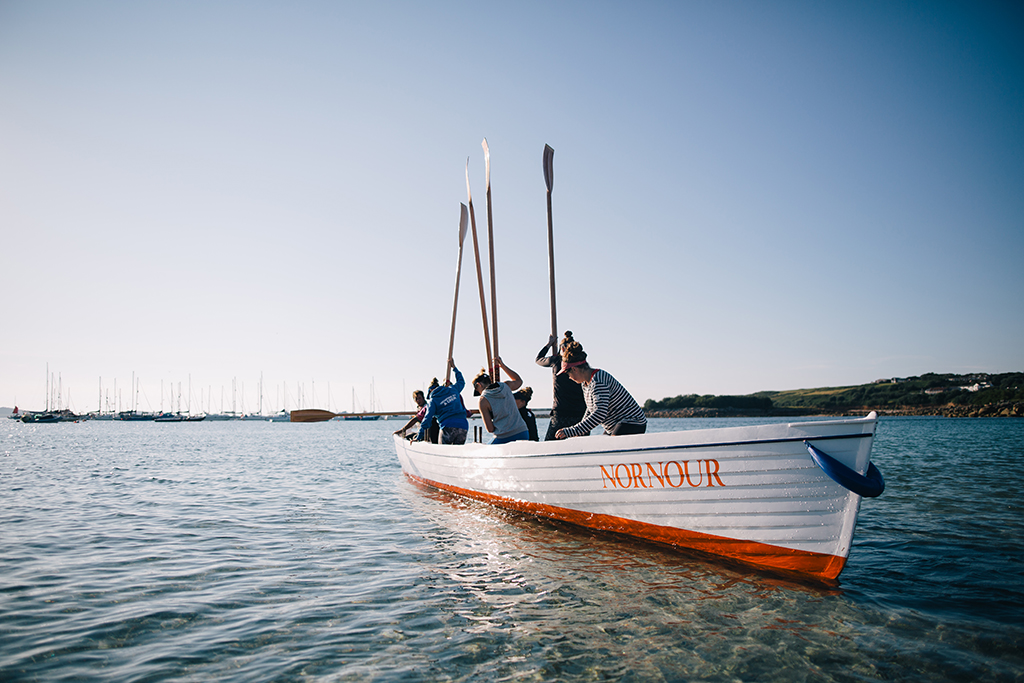 Join in the festivities of maritime tradition and experience a seaside spectacle like no other between 30th April and 2nd May 2021 on The Isles of Scilly.

Now in its 31st year, the World Pilot Gig Rowing Championship is a spectacular event that sees thousands of rowers and supporters travel to The Isles of Scilly to watch the gigs power through the waves in a colourful and exciting extravaganza. Taking place on the first bank holiday of May, a week in Scilly at this time enables you to watch the islands transform from an idyllic haven to a festival-like celebration of Cornish heritage, offering the best of both worlds in a stunning and family friendly location. The population of the island doubles, there’s a buzz in the air and everyone is in high spirits.

What is gig rowing?

Whilst The Isles of Scilly are an enchanting archipelago boasting white sandy beaches and crystal-clear turquoise waters, these waters are famously treacherous to navigate. The islands have one of the highest concentrations of shipwrecks in the UK, with over nine hundred wrecks having foundered on the rocks fringing the shores (you can learn all about this at Charlestown Shipwreck Museum on the Cornish mainland). Gig boats have been used since the eighteenth century to carry pilots with expert knowledge of the coastline to board and direct vessels requiring assistance. They would race from each island to approaching ships, with the hope of arriving first and being awarded the contract for the pilotage and therefore payment. It is from this tradition that gig rowing was born as a sport and is now an important social activity for bringing the island community together.

Those spectating the championships can see three gigs known for saving many lives from shipwrecks and transporting cargo (the Bonnet, Slippen and Golden Eagle) in action, being raced by Newquay Gig Club.

What are the championships?

Initially, the championships were mostly inter-island with a few crews travelling from Cornwall. However, since then it has grown considerably in popularity, attracting crews from around the globe and even a blind crew!

The main event is the race from St Agnes to St Mary’s on Saturday, involving every gig scrambling to get to the harbour in Hugh Town first. The event comes alive as each of the brightly coloured gigs churn up the water, hoping to scoop a favourable group position in preparation for the heats taking place over the remainder of the weekend. The start line is over a mile long and as the race ensues, you can hear the paddles as they cut through the water and clatter against one another as teams strive for pole position. This fabulously unique sight and sound is best experienced from the water by boarding one of the many available visitor boats, but for those who favour the land, welcoming the boats to the finish line amongst the crowds is also an exhilarating experience. Alternatively, there are a number of favourable viewing spots around the Garrison, from which you can also view the shorter Nut Rock races. If you’re struggling for directions, fear not; the gig and island communities are well-known for being friendly and there is always a local or fellow reveller happy to point you to a viewing point.

Sunday afternoon’s races determine the overall positions, group and medal winners, but festivities are held each evening of the weekend as crews celebrate or commiserate the day’s successes. Hugh Town comes alive as people flock to the pubs lining the harbour, where a pint of island brewed ale is a must and Cornish chants boom through the streets. Whilst the championships are a jovial and exciting occasion, the sport is still taken very seriously. A spokesperson for St Mary’s Gig Club told me that training takes place all year round, with intense gym sessions during the winter and training on the water whenever the opportunity arises. This year, the level of competition is expected to be higher than ever as the event’s popularity has increased so much that a selection criterion for crews has had to be introduced!

The best way to enjoy the championships is by booking a week on the islands with a few days either side of the weekend. This way, you can enjoy the build-up of the event and the excitement of the races, before watching the island return to its idyllic state for a few days of relaxation. To get the full experience, exploring the islands is a must.

There’s plenty to do and it’s often that visitors are so wrapped up in the exhilaration that they forget to delve into the many wonders on offer. Easter is typically the start of the tourist season, so by the time gig weekend swings around most, if not all, places are already open and well prepared for visitors. At this point of the year the puffins are returning; The Isles of Scilly being one of only a handful of sites in the UK where you can spot them. Other animals to keep an eye out for are basking sharks, seals and dolphins; though there’s a better chance of seeing them when the excitement of the races has died down. There are also a number of boat tours happening, so you can go island hopping and visit one of the many inhabited or uninhabited islands around St Mary’s.

There are plenty of walking and cycling trails and the sights and scents of Scilly are something to marvel at. Covered in sub-tropical plants and flowers, you can see a number of unusual species of flora, especially if you take a trip to the spectacular Tresco Abbey Gardens where twenty thousand plants from more than eighty countries flourish. By night, Scilly sunsets are some of the best in the country and the stargazing is truly spectacular.